Yesterday I talked about the codex and the rules changes it brings for the Dark Angels. Today I'm going to talk about the new kits we got. Basically thats the flyer, land speeder, characters and the ravenwing & deathwing boxes.

Dark Talon/Nephilim Jetfighter
Like the Heldrake this is pretty expensive for a two-sprue box. As ever it's probably down to their "whatever we can get away with charging" policy. They knew they'd sell so why not make a pile on them. Anyway, the kit is pretty nice to assemble. Since the rules are pretty crap for both variants at the moment I'm hedging my bets and magnetising so I can pick and choose. I'll post about this at some point but Jamie might be me to it on his blog. One of the advantages of the new kits is that their precision design means that some parts are such a snug fit that magnets aren't needed. It's a pretty straightforward process to make it interchangeable though.

Otherwise, its a gorgeous model and some of the details are excellent. The pilots helmet is stunning but sadly you're unlikely to ever see it. I almost stole it for another model! The "flying cathedral" is growing on me too and I'm starting to prefer it to the sleek black look of the Nephilim. I really hope the rules get sorted out so I can include one in my armies without feeling like it's a waste of points. 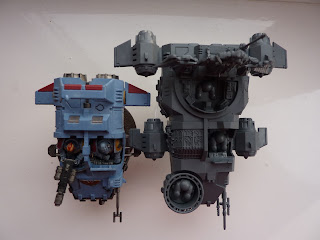 Most people hated this model when they first saw it. Whilst I'm sure most of them still do I have to say it's growing on me. It's a surprisingly big model actually. When you see it in pictures you'd think it's roughly the same dimensions as the standard speeder but as you can see here it's significantly larger in all aspects. I haven't bought one yet so I was watching Jamie assemble his. The icon/relic thing on the back feels a bit flimsy though. I'd have expected it to be a bit less two dimensional but again it's growing on me.

In terms of assembly it didn't seem to take Jamie long and aside from the HB/AC swap there isn't any need to magnetize as you can swap the plasma storm for the relic easily. The question is, why would you want to put the plasma storm on it?

Characters
Jamie grabbed a Sammael on Corvex in it's finecast glory. I never tried to assemble a metal one but I can only imagine it was a ball-ache. The finecast one seemed reasonably good quality and went together pretty easily. There were the ever-present sections of bubbling but they were in out of the way places and overall the detail of the model really stood out even without paint. Think I'll be getting one if I can work him into my lists.

Otherwise we didn't pick up any characters. We've both said we like the look of Ezekiel with his new sculpted banner but frankly I'm just going to use my DV librarian instead. It's the same story with any of the chaplain versions as the DV one can easily represent them. Asmodai is a nice model but rules-wise he's not going to get my vote.

The new model for Belial and existing Azrael model don't really do anything for me. The other problem with them is that they can be easily created from parts in the other kits. Azrael is easily the DV one with a head swap and DW watcher converted to carry his helmet. A far nicer model for Belial can be greated from the DW kit too. Purists will still want the proper models but I'm surprised GW made it so simple to create your own model from the DV kit and new parts. Fair play to them if they intended it that way but I kind of suspect they hoped the proper models would be too tempting but they aren't! Anyway, until I get my conversions done take a look at Jamie's efforts and try to tell me it's worth buying the proper models!

Deathwing Kit
There's a ton of options in here for creating a whole raft of different models. I've made mine into Deathwing Knights (more on them later). Jamie took great amusement from watching me try to assemble them though. The problem comes when you try and stick the arms on. The sprues themselves are fully numbered up but GW in their infinite wisdom decided not to bother numbering the parts in the instructions. This would be fine but for the mace arms. Firstly it's annoying that they come in parts especially considering you don't need to pose them that much and spare arms for other models would be nice. Secondly, specific arms are necessary for specific maces/torsos and trying to compare them to a picture created swearing a-plenty when I started to glue the wrong arm on! The arms don't really have a very satisfying connection to the body. They aren't totally flat to allow a range of poses but aren't recessed enough to make them sit comfortably either. Maybe I just got a duff kit but I've never known their plastics to be inconsistent.

Anyway, all that aside I've not even begun to explore the other options in the kit. I'm impressed they include so many different parts, especially all four heavy weapon options including the cyclone for a change! The kit is pretty damn expensive though and I'm going to be looking into how easy it will be to make DW terminators using the standard terminator kit and some parts from the proper DA one.

There's tons of detail on all of the parts and I love the censers and bits of gothic detail here and there. There's some nice touches throughout with the arched vents on the back to the shoulder pad details.

Ravenwing Kit
Another kit with a vast array of assembly options. There's plenty in here to make your normal RW bikes a bit better too. The command squadron has some gorgeous models but thanks to the size limit on the unit I'll probably buy a second kit and just make 6 black knights. You only get 3 plasma talons but since you'll be taking a grenade launcher most of the time you'll have a spare pair in each kit.

Again the detail here is stunning. I've not tried to assemble any bikes yet (I'm waiting til I've decided on a list) but they're going to look great. The black knights will probably make it into most of my armies just because I love the models in a similar way to my thunderwolves getting more than their fair share of outings.

Conclusion
I've only just begun to work out what I can do with the kits and I'm hoping by combining them with the DV models I already had and two RW battleforces I've bought I'll have enough stuff to create an interesting list already.

The question remains as to whether or not I'll be able to get 1,850pts worth ready for Blog Wars 5 but screw the Dark Eldar for a while as I try to get these guys painted!
Posted by From The Fang at 17:00:00