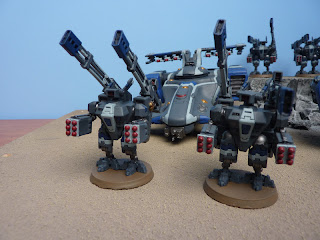 Hopefully you've already read the first two parts of this article here and here but if not, take a look first and come back. This final part will continue our look at the options available for dealing with enemy flyers before drawing it all together.

Twin Linkage and Torrent
As I'd hope you all know by now, the problem with trying to kill flyers is that 6 to hit. After that they're no harder to kill than any other vehicle. Without spending points on dedicated anti-air units the remaining option for trying to shoot them down is with either twin-linking high strength shots or else a high volume of shots mid-high strength shots. Obviously there are lots of options here so I'm not going to go into all of them. Here's a few ideas.

Take a psyfleman dreadnought for example. These mainstays of a lot of Grey Knights lists in 5th edition offer a reasonable chance of killing flyers. Back to the dreaded Mathammer and they have a roughly 1 in 10 chance of killing an AV11 flyer in a single volley. Not bad for 135pts since they're still useful for killing other vehicles, instant killing multi-wound T4 models and generally being a pain in the arse. HPs mean they aren't as durable but they still aren't that easy to shift and you'd have probably taken them in your GK army anyway!

My current favourite for killing flyers though has to be Tau Broadsides, with S10 AP1 railguns they've always been a threat to vehicles. A pair of them have a better than 25% chance of killing an AV11 flyer in one volley and 20% chance of doing the same against AV12. For 203pts you get a team with 2+ saves, two shield drones to keep them alive, ASS for moving to deny cover, a target lock to let them hit two different targets and a blacksun filter for night vision. That to me is a pretty enticing package! Not cheap by anyone's standard but everyone fears a broadside! With Tau able to ally with pretty much everyone they're worth considering.

A lot of other units can easily be made twin-linked now thanks to the wide availability of the Divination psychic powers and hence Prescience. For example, a cheap DA psyker attached to some devastators can make them into a potential anti-air threat. I'd even argue that it'd be more useful to spend your points on attaching a psyker than giving them flakk missiles.

A good example of torrent is Eldar War Walkers. 24 S6 shots might result in a lucky penetrating hit on a flyer. Throw in Fortune and you've got a real chance of gimping an AV11 flyer. Bit of a waste of the unit mind you. The other way to look at torrent is by focussing several different units with a low chance of killing a flyer onto one in the same turn and hoping you can accumulate enough hit points or get a lucky pen. Most of the time that fire can be put to better use though.

Finally, the ultimate example of non-dedicated anti-air that works is the Necron Annihilation Barge. Being S7, Twin-Linked and Tesla makes these really dangerous to flyers. They get two bonus dice for every 6 they get from their Tesla rule which means those hits soon mount up. For 90pts they're pretty much an automatic choice for Necron players. It's not like Necrons needed much help doing well in 6th edition though!!

Close Combat!?!
Are you seriously telling me CC is a viable anti-flyer option? Well yes, actually. Obviously this is only any good for flyers in Hover mode but when they leave themselves vulnerable in this way you've got to take the opportunity with both hands. In the last doubles we attended we actually took down four stormravens using only CC attacks! Granted we had and S10 thunderwolf and dreadknights but that's hardly the point.

Seriously, though it might be the only chance some armies get to take down a pesky flyer so its worth keeping your wits about you and pouncing when you can.

Who Cares If You've Got A Shiny Plane?
The last option available is the least effective method of destroying flyers i.e. don't even try. I'm still writing lists without any anti-air options in them. Sometimes this will backfire horribly but on other occasions you'll find yourself at an advantage against an army that doesn't have flyers of its own but has spent points on anti-air.

Realistically this is getting to be less and less of an option though. You'd struggle to go through a two-day tournament without facing at least one flyer-spam list be it IG or Necron. Still might be better than wasting points on a token gesture quad gun though!

Conclusion
I've basically written these articles to try and collect my thoughts on flyers and how I'm going to deal with them with my armies. I'm not exactly spoilt for choice with my Space Wolves but there's still hope from allies. I think ultimately you have to make a decision about how many points you want to sacrifice to the cause. You can sink hundreds into it and still fail to swat a single fly.

I hope these articles have been useful to some of you. I'm not the first person to talk about flyers but hopefully I've given a different opinion that get's people thinking. It's going to be interesting once all the armies have their own flyers. I'm intrigued to see what the Tau Air Caste can produce for me and rumour has it I won't have long to wait. If Tau produce some strong anti-air units I can see them selling well as allies. It already sounds like a GW marketing strategy.....