Unbelievably we're already heading into June and yet this is just my sixth post of the year. "What could bring me out of hiding to post again?" I hear you ask. Well pie charts of course! For those of you not familiar with this little bit of silliness, the pie chart post is a bit of a tradition for my tournaments. After I've received all of the lists I put together some meaningless statistics into some, even more meaningless pie charts. My wife points out that "no one uses pie charts anymore" but I've never been a dedicated follower of fashion!

As ever, let me start (well start the second paragraph of the start) by thanking everyone for submitting their lists on time. I have to say this was by far the easiest list checking session I've ever had. Maybe that's because GW have got their house in order and made it easier or maybe it's just that it's pretty difficult to eff up an 875pt lists in a single detachment! Nevertheless, aside from a minor niggle based on the "Big FAQ" (more on that in a bit) I had no queries to speak of. I'm sure I'll have missed something but anyway, on with the pie! Oh but before you do, maybe refresh your memory with the DT2 and NMTBW pies.

The Pie Charts
Far be it for me to break with tradition so let's start with the Faction Breakdown pie: 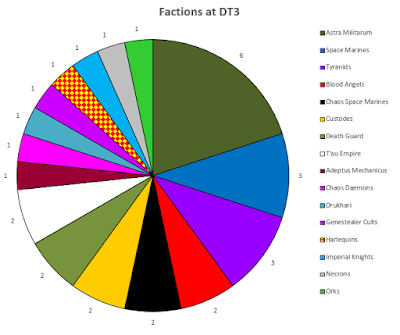 Click to embiggen. Unless my pie chart for DT2 was wrong (seems unlikely), there were no Guard/AM players at DT2. Now though, they make up a fifth of the armies at DT3. Tyranids also weren't present at DT2 but there are another two lists on top of mine. Some notable absences are Space Wolves (presumably because they're without a codex?!), Grey Knights, Dark Angels and perhaps most surprisingly, Eldar although I'm pleased to see their dark brethren are in attendance. I think we've now had every faction at my tournaments with the possible exception of Sisters of Silence but they're without a codex. Pleased to see GS cults even if Dave says he's never used them before!

There's an interesting shift though which we can see beautifully demonstrated in our next pie: 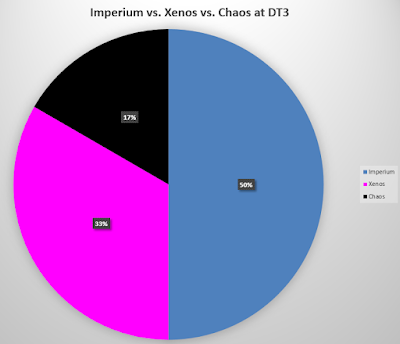 Only half of the armies are defending the Imperium of Man. That still sounds like a lot but I'll wait while you go and look at the same pie DT2 where over a third were Imperial. Interestingly it's a pretty similar looking pie to the one at NMTBW except Chaos have lost out a bit to Xenos. Does this mean that despite GW's best efforts those plucky Adeptus Astartes are falling in popularity compared to the Xenos "scum"? Probably not to be honest, not exactly a statistically significant result!! From my perspective though I find Xenos to be far more interesting which is one of the reasons my Dark Angels headed over to San Diego following their eBay sale. You might remember at DT2 that 18 of the 28 armies were Space Marines of one flavour or another. This time around it drops to 11 of 30 with very few Primaris marines to be seen.

Right let's start taking a look at army composition at DT3. I decided in the end to place as few restrictions on the lists as I could. My main stipulation was a single Battle Forged detachment. You can see which ones people chose here: 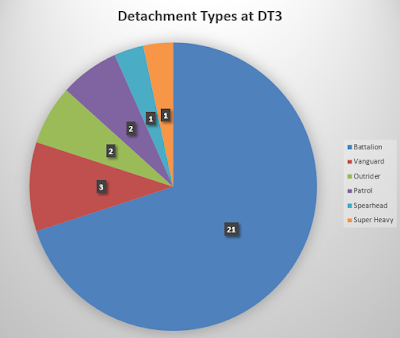 Hardly surprising that the Battalion is a run-away favourite since it offers the most CP and is pretty easy for most armies to fill. There's not really much to say here but you'll notice the single Super Heavy detachment. No prizes for guessing that's the single Imperial Knights list. Speaking of which: 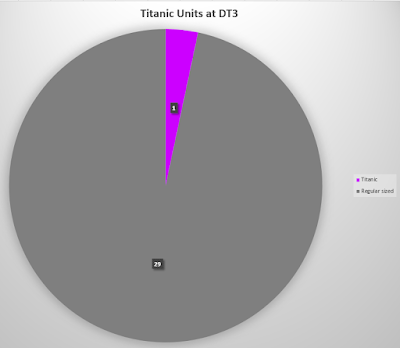 Completely pointless pie chart but considering I was thinking of banning the TITANIC keyword I think it's worth highlighting that next to no-one bothered anyway! Similarly FW wasn't exactly popular: 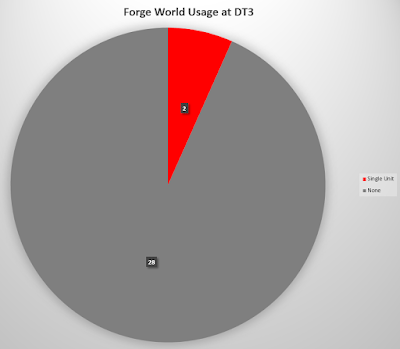 Of the two armies with FW units (both of which contain just a single FW unit), one is mostly for fluff reasons and the other, well, I'll let you find out for yourselves if you face it! As someone who has little interest in FW units, largely because of their prohibitive pricing, I wonder why they aren't more popular. Obviously this is a small sample but last time 8 of the 28 lists used FW models. Are they too expensive for this points level? Are they just no good in 8th? You tell me.

Another thing I bothered to restrict last time was the number of each unit you could take and how many models you could have in a unit. I didn't bother limiting these this time so let's look at what effect that's had: 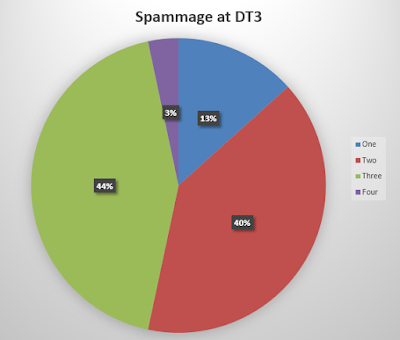 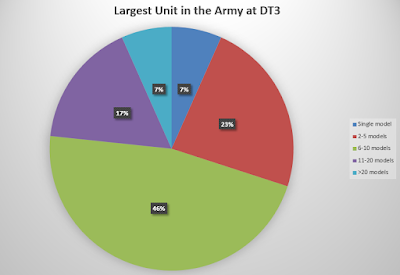 Bear in mind the first chart includes troop units that were spammed. Still, just over half of the lists inadvertently stuck to my old comp of "no more than two of anything". This would jump up even higher if I ignored troops and transports but I can't be arsed to go back and run those numbers! Anyway, we'll see how much of an issue it is. GW obviously think it is as in the "Big FAQ" they limit the number of times each datasheet can be used. This is where I had some minor problems with list checking:

Given that these lists are under 1,000pts then they should only have two of each datasheet right? Well, what about if you consider they're actually half of an, as yet undiscovered, 1750 pt army. Should three of each be allowed? Anyway, it didn't make much difference as only one list had to be changed dramatically as a result. The irony is that the list actually became more "spammy" despite having more variety in the units. Not sure that's what GW intended!!

Right, that wraps up the pie charts I could be bothered to create for you! I find this process quite interesting, especially as someone who's only played in one tournament (that I wasn't running) in 8th. I'm struggling to motivate myself to participate in one but I'll save that discussion for another post. For now let me leave you with the attendance figures updated to reflect DT3. 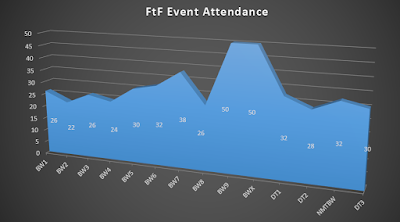 Assuming these were all unique individuals that'd be 446 people. Obviously there haven't been that many as a large amount of my participants are repeat or even serial offenders. Still, it's a sobering thought that I've checked that many lists over the years!!!

At some point I plan on doing a bit of a stats deep dive on all of the data I've got from these 14 events that I've run over the past 7 years. There's something to look forward to eh?

Right, I'm off to look at my Tyranids in despair and decide whether I should do some frantic painting in the next couple of weeks or admit defeat and just use Scott's army which I have on loan. See you all in less than a fortnight!
Posted by From The Fang at 23:43:00 3 comments: