I've never quite felt the love for the conventional DA scheme as the army looks a little disparate with each "wing" in a different colour and little to tie them together. Whilst I realise that's the point, I wanted something different for my army. I still wanted it to have clear "wings" but with something to tie them together. When I got the DV kit I looked through the old codex with the intention of making a successor chapter. The one that caught my eye was the Angels of Redemption with their 50:50 colour scheme so I started to paint up a test model from the tactical squad and here he is: 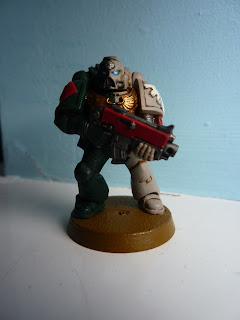 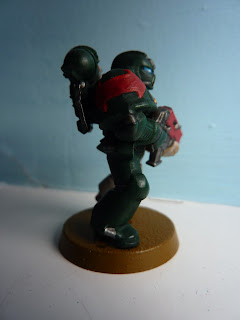 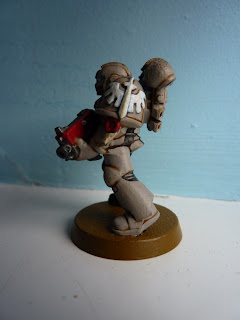 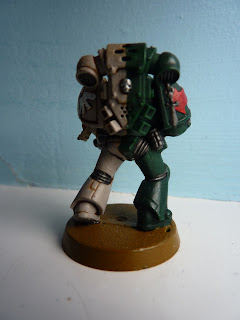 I've since improved on the green portion of the armour by applying a bit heavier drybrushed highlight before the wash to make the detail stand out better. I'm also planning on giving the stone half an edge highlight to make it more of a contrast to the green. I'm happy with it as a first attempt to test the scheme but hopefully subsequent models will be cleaner and sharper. The red guns create a nice bridge between the two halves and hopefully I've avoided the Christmas look. Angels of Redemption are meant to have black guns but I felt the red worked better. The chapter symbol was nearly going to be red too but I actually like how well it stands out even though that side of the armour is light. I think I'll probably switch to a light grey with white highlight though to tone it down. I've used the new paints pretty much exclusively aprt from the metallics which are old pots. I'll post up a step-by-step for anyone that's interested when I start doing the terminators.

I didn't fancy trying to file down the sculpted DA symbol so they'll not formally be the Angels of Redemption chapter but rather just DA in another colour scheme. The fluff loving types out there won't like it but they'll get over it. Now this scheme is pretty easy to apply to the "greenwing" portion of the army with 50:50 tanks etc. I've decided to make the cloaks purple which works nicely with the scheme. The traditional creamy coloured robes just don't work with the 50:50. How to apply it to the rest of the army is another matter. There are no hard and fast rules for how successors apply their equivalent RW/DW schemes but since I'm keeping the DA logo I'll need nod to their traditional colours.

I actually think this scheme reflects the character of the army well. The dark green conveys the mysterious forests of Caliban whilst the stone is the "light" of Imperial truth on the Rock! It also conveys their duplicity in that they nearly turned traitor and you aren't really sure if they're totally back to being loyalists.

Anyway, if that last paragraph hasn't made you dry heave, here's my plan to apply it to the rest of the army:

Ravenwing bikers - black bike with 50:50 rider - I've seen full 50:50 versions and they give you a headache.
Ravenwing black knights - black bike, black rider - should make them stand out nicely. I might throw in a 50:50 portion somewhere to tie them in.
Ravenwing vehicles - again black with 50:50 drivers, the flyer might look nice 50:50 but frankly I like the look of it in all black. Speeders might look a bit wrong with two 50:50 drivers side-by-side but we'll have to see.
Deathwing - still trying to figure it out but probably same 50:50 as the tac squad as I want plenty of models with this scheme to make sure it comes across.
Deathwing knights - probably still 50:50 with purple robes but it depends how the test model comes out.
Librarian - same scheme as DV as the robes already work but might try 50:50 robes too.
Chaplain - not quite decided yet but not sure I'll be using one anyway.
Other HQs - I'll stick close to my 50:50 schem depending on their wing or what models they'll join
Normal marines and vehicles - will all be 50:50 as above which I hope will let the scheme come through despite the other wings.

How successful this scheme will be remains to be seen. I can almost guarantee I'll wish I'd just stuck with the normal colours after I've painted a few units! The whole point of doing this project is to develop my painting skills and I usually play safe and copy codex art so this is relatively new territory for me. I hope it will be interesting to read about my progress. Either way it's a good excuse to get more "hobby" content onto the blog which I've always been meaning to do.

I haven't forgotten my plans for the scenery by the way. The idea is to paint a DA unit then take a break by doing some scenery so that I don't get too fed up of power armour again!
Posted by From The Fang at 17:00:00