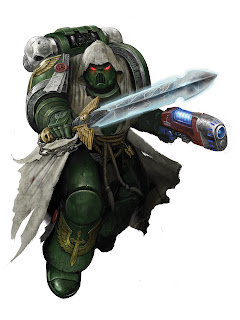 I'm still in the process of trying to write lists for my DA army. I've been making my usual spreadsheet for list building. I start with all the options and then try and thin it out to stuff I'm actually likely to take. This makes list building quick and easy as you don't need to decide on all the options every time. Anyway, to that end I'm trying to look at the Wargear section and figure out what will be useful. I don't think we'll know about some of the stuff until it's been playtested a bit but here's my current thoughts. I'm not going to describe what each weapon does because you can read that in the codex for yourself!

Special Issue Wargear
Auspex - I can see this being useful to make a burst of rapid fire really effective against some infantry huddled in cover. For 5pts its worth throwing in to most lists.
Combat Shield - Same as ever and can't really see the point unless you've 5pts spare but I'd rather have an Auspex in that situation
Infravisor - Being able to gain Night Vision for 5pts is great, especially when you stick it on a libby in a devastator squad!
Melta bombs - same as ever but as usual, very situational so only really worth it if you've already bought an Auspex!
Digital weapons - if you've pimped out a character with a nasty weapon it's probably worth giving them this (assuming that weapon isn't high strength). Librarians might find this useful to maximise their chances of a force weapon insta-death. Bit pricey though for a single re-roll per phase.
Porta-rack - unless we start seeing more armies with teleport homers/locator beacons then you're basically paying for the Preferred Enemy bit. Fear isn't much good against units that you'd actually struggle with in combat either. Pretty situational again. Can't see me using it.
Conversion field - 4++ save for 15pts. Most of the time this will be good. Causing Blind could be great provided your own unit passes the test with its re-roll! Worth considering.
Jump pack - doubt we'll see many assault squads in DA armies but might find some use with Battle Brother allies.
Space Marine bike - I think the most common unit here will be a libby on a bike. It's a shame about the Company Master but using a cheap chaplain/libby/techmarine can add some survivability to the RW command squad.
Displacer field - Bit of a strange one. For similar points to a storm shield (why couldn't they have just given us them instead?) you get a 3++ save but might bounce around the table a bit. Can't really see the displacement causing many problems as it's reduced if you land on something. Have to try this out in practice really. The question is how will coherency be affected? Be shame to lose Look Out Sir! if you scatter the wrong way.
Power field generator - great for shooting but of dubious use in combat. Chances are you don't really want to give your character's enemies a save too, especially since he's probably got a power weapon that'll be gimped by it! Only useful if you don't intend to get him stuck in. For example, cheap libby with Divination (Prescience) sat with devastators.

Overall an interesting selection but I think there's probably only the Auspex, Digital Weapons, Infravisor, Conversion Field and Power Field Generator that will get much use. Oh and the bike of course! The Displacer Field is a bit of an enigma at the minute. Could be great but might end up annoying.

Chapter Relics
Foe-smiter - pretty expensive for what is essential the same as a 3 shot storm bolter. If it were AP3 then I might take more notice.
Lion's Roar - basically a short range plasma cannon with a scatter re-roll. In the right situation could be great but I think for 20pts it's of limited use. Essentially paying 5pts to reduce range and gain a re-roll.
Mace of Redemption - In the hands of most characters this will be a pretty lethal tool. If you've done some toughness reduction it'll be insta-deathing marine characters too. Especially good against CSM. Blind & Concussive will severely hamper a big MC if it survives.
Monster Slayer of Caliban - 15pts more than the Mace and could end up being a power sword! Bit of fun but not that great.
Shroud of Heroes - not sure whether this will be good or not. 50pts seems a lot to me when half of its benefits won't get used most of the time.

Overall there's probably only the Mace and maybe the Lion's Roar that'll make an appearance in my army. Hope this little rundown helps people make their selections.

Right back to the army listing. I'll post up some of my ideas when I've actually made some I'm totally happy with!
Posted by From The Fang at 17:00:00