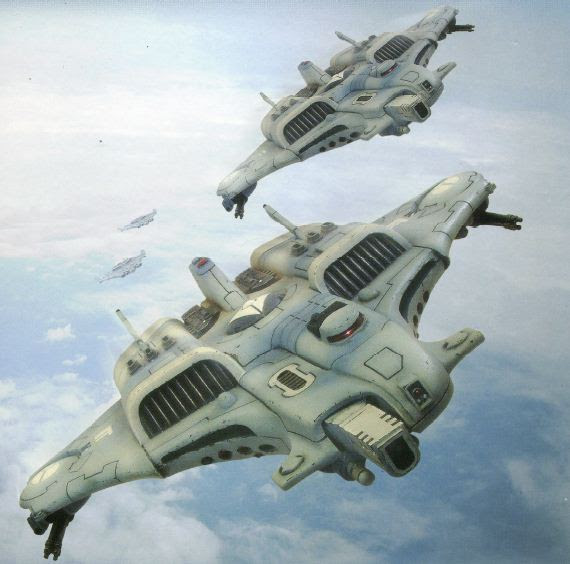 Hopefully you've already read the first part of this article but if not, take a look first and come back. Right, this part will begin to look at the options available to us to deal with enemy flyers.

Dogfighting - Air to Air Combat
The most obvious way to deal with enemy flyers is to take some of your own. That's assuming of course your army has some to take! Some flyers are better than others at dealing with their opposite numbers (e.g. Stormravens and Vendettas) and should be able to kill an enemy flyer in a single volley, others (like the Stormtalon, Nephilim and Razorwing) might get lucky but the rest will really struggle.

How do you maximise your chances of achieving air superiority? The key is to make sure you get your flyer onto the table after they get theirs on. Might sound obvious but for most players the first target of their flyers is going to be any enemy ones they can pick on. Having some kind of reserve manipulation from Warlord Traits, Astropaths, etc. is pretty useful here. There's nothing like seeing your opponent proudly zooming his flyer onto the table only to have him take it away again in your turn!

The other useful tool here is Hover mode. Whilst it won't help you take down an enemy flyer (since you'll lose Skyfire in most cases) it can allow you to re-position behind an enemy flyer ready to take them down next turn and perhaps help you avoid their guns too. Obviously this puts you at an extreme risk from ground troops but you'll still have your Jink save to minimise the damage. Putting yourself in a position where you force your opponent to Hover can be a good option too.

The problem with using flyers to counter other flyers is that you aren't necessarily helping the overall war effort. Sure you're taking out a threat but you're risking points in the hope that your flyer will kill theirs before it dies. Most flyers offer a dual role though so you can probably justify them. Either way the better dogfighters are the ones with AP1/AP2 such as the Stormraven as they've got the best chance of getting that all important explosion.

Anti-Air Ground Support
With each new codex there are likely to be more and more ground based anti-air options becoming available. Having said that GW aren't going to want to totally gimp flyers by allowing reliable, low cost, anti-air in every codex. What's more likely is that you'll have to sacrifice a chunk of points in the hopes that you face enemy flyers and hence you haven't wasted these units.

At the moment there are only a handful of proper dedicated anti-air units out there so let's take a look at them. Firstly, the ubiquitous quad gun. Every army has access to one of them (despite the model looking a bit out of place in some armies) so they're the go-to-guys for token anti-air weaponry. You have to pay for the Aegis line though and 100pts for the set isn't cheap. Luckily the Aegis line has its uses but actually how useful is the gun? Being able to use Interceptor can help take out a flyer before it's even had chance to be an annoyance but they aren't all that reliable.

As regular readers should know, I'm not a fan of mathammer but here I think it's important to make a point. Really you want to be blowing the flyer up as it won't care if it loses a hull point or two. A quad gun operated by a BS4 model has a roughly 1 in 5 chance of destroying an AV11 flyer in one shot and a 1 in 10 chance of doing the same to an AV12 flyer. That's not all that great! Essentially, your quad gun will kill one flyer a game by straight explosion. The problem really is the lack of AP 1 or 2 to ensure a boom. Now as with all mathammer that's assuming a lot e.g you're in range, he doesn't manage to Evade or make any other kind of save and of course that he hasn't already killed your gun (which isn't that hard to do). For 50pts though it's not a bad option if you can find a use for the defense line. At least it has some utility outside killing flyers too and you might strip enough HP from a flyer for another unit to finish the job.

Moving on, the only pure Skyfire unit out there (to my knowledge) is the Imperial Guard Hydra. This is essentially just a quad-gun on a tank though and whilst it doesn't cost much more it's limited use outside anti-air. If you know you're likely to face flyer-spam then maybe but most IG generals will probably prefer to rely on Vendettas.

Finally, we come to Flakk missiles. When these were first spotted in the rulebook there was a lot of excitement about them and who would be able to use them. With the CSM and DA codexes we discovered that they're going to be pretty widely available to marine armies but at a hefty cost. Each missile launcher will set you back 25pts and whilst you still get all the advantages of the standard launcher you're making yourself public enemy number one. Most players will focus everything on taking out these units early before they can cause a problem for their flyers. The DA book allows for several launchers to be dotted around your army in scout, tactical and devastator squads. I have to wonder if it's worth it though. Coming back to the dreaded mathammer a 5-man (4 launcher) devastator unit costing 170pts will only give you a 15% chance of blowing up an AV11 flyer. Granted they're a bit harder to stop than the quad gun but they're also a lot more expensive.

So what's the solution here? Well as with most things in 40K if somethings good take several. Anyone who's basing a significant portion of their strategy around flyers will be looking at your list for the anti-air threats. If you've got that one quad gun then you can kiss it goodbye almost straight away. You're then faced with the next 4-5 turns taking pot shots with other weapons and hoping. By taking your own flyer, a few flakk missiles dotted here and a quad gun you're unlikely to ever be left without some kind of useful firepower. Mind you you'll have also blown a lot of points and regret if when your opponent hasn't got a single flyer!

Essentially what I'm trying to say is that by choosing these units to tick the "I can deal with flyers" box is a bit of a nonsense. Quad guns, flakk missiles and Hydras really can't reliably deal with them. I mean granted nothing can at the moment but you have to weigh up if you can afford the cost.

In the next article I'll look at other ways of dealing with flyers outside the obvious.
Posted by From The Fang at 18:00:00