Well here we are again and it really hasn't been long since the last Obligatory Pie Chart Post(TM) which was just three months ago. I remarked at the start of that post that it was only my sixth post of the year. I've hardly been prolific since as this will be my 12th post of the year with September just around the corner. I'm hoping that once DT4 is out of the way I'll be able to make more hobby posts. Speaking of which I might find time for a post on Friday night with my hopefully finished Armiger Helverins. Fingers crossed.

Anyway, you came for the pie not for the rambling. As is traditional I want to thank everyone for submitting their lists on time. I'm a little late putting this post together as up until yesterday I was still trying to secure an additional four players. I'm happy to say I was successful so DT4 will have 28 players in attendance. As I'm sure you know by now, this is my final event so I can officially say there's never been a female gamer at one of my events. That's a huge shame I think but I guess I should just be happy with some international guests over the past few years. Before I dig into today's pies, maybe you'd like to whet your appetite with the DT3, DT2 and NMTBW pies.

The Pie Charts
For one final time let's look at the Faction Breakdown pie first: 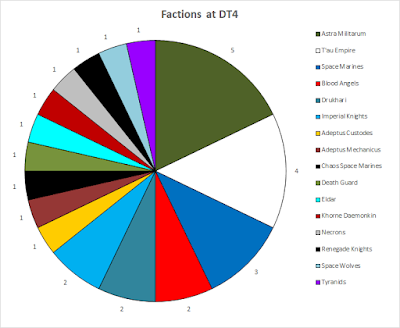 Just like at DT3, Astra Militarum are the most abundant faction but T'au have snuck in between them and the Adeptus Astartes. Those three factions account for nearly half of the armies in attendance so expect to meet them at least once over the weekend. I'm pleased to report that Space Wolves are finally back in the pictures but still no Grey Knights or Dark Angels. Eldar are back too but still outnumbered by Drukhari. With a Renegade Knights army making it's first appearance I'm still pretty confident we've seen every single faction at my events at some point over the years. 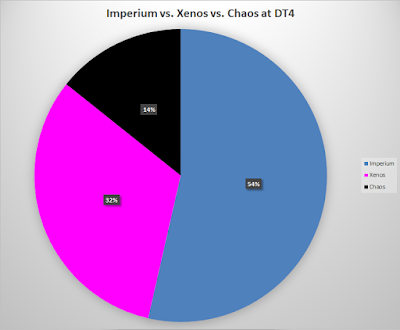 Slight increase in Imperial forces at DT4 compared to the last outing but the proportions are almost identical to DT3 otherwise. The Imperium remains popular but it's hardly surprising when there are so many factions under that umbrella. Not many Space Marine armies with only 9 of the 28 being clad in power armour (including DG and CSM) which I'm all for. Since I sold my DA there's just my Space Wolves that fall into that category.

Moving onto army composition, I again didn't restrict people too much at all with Battle Forged being the only requirement. There's an interesting shift in the detachments used though: 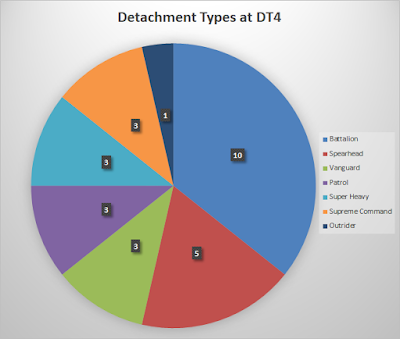 A huge chunk of Battalions are gone and a much greater variety of detachments in general. I think this bodes well for army variety too as there's less need to spam certain unit types. Supreme Command detachments didn't feature at all at DT3 but show themselves this time around. You'll also notice three Super Heavy detachments and it doesn't take a genius to figure out that means two IK lists and one Renegade Knight list. They're not the only titanic units though: 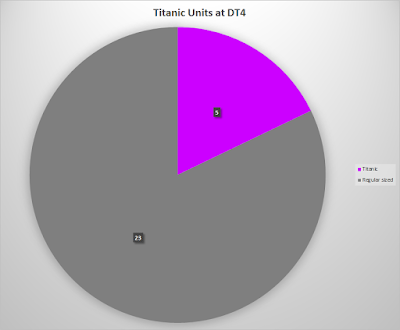 Far more big stuff roaming around the battlefields then. It'll be interesting to see how they shake out in the standings. I'd be surprised if they do all that well in the Master Tactician award but I'd expect them near the top of the Genocidal Maniac rankings. I just hope that people enjoy their giant killing rather than finding them too much at this level. Speaking of too much: 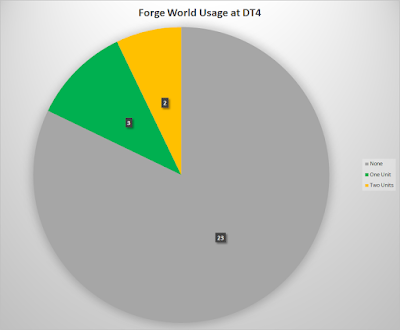 I've never made a secret of my dislike for Forge World but at DT3 there wasn't much of it on display. DT4 sees nearly triple the proportion of armies featuring at least one FW unit. We'll see how much difference they make. As above, my hope is that it doesn't have a negative effect on the enjoyment of the people playing against them.

Another interesting thing to look at is the amount of spam in the lists: 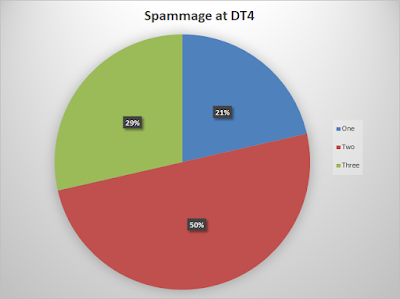 No one is taking more than three of anything (hardly a surprise given the points limit) but in general there's less spam in the lists which I hope makes for more interesting games. Speaking of which there's also been a shift in the unit sizes: 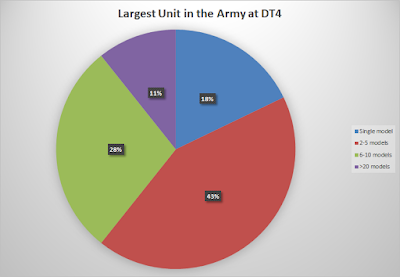 There are extremely few armies that feature units with more than 10 models in them, in fact there are just three lists with units with more than 20 models (none with 11-20 models). It's interesting that one of the criticisms laid at 8th edition is that there's a lot of spam and a prevalence of hordes. I can't say I play much, if any, competitive 40K any more but it's certainly something that put me off. This is hardly a fair sample when there was just 875pts to play with but at least it means games should be quicker if nothing else.

That's it for the pie but I'll leave you with the usual look at the attendance at my events over the years: 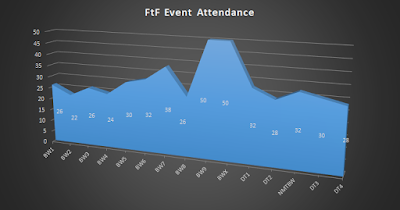 That's the better part of 500 tickets sold for my events. I think it's important to point out that I've never made much money from doing this. If I offered the bare minimum in prize support then I might've done so but for the hours I've put into this over the years it probably still doesn't represent minimum wage! Anyway, suffice to say I'm not in it for the money! I'd rather give away a silly amount on the raffle. Speaking of which the top two prizes this time are over worth £170 at RRP!

Anyway, it's not long now until my 15th and final 40K event. I'd hoped to see more of the veterans there but sadly I was limited on my choice of date at the venue which meant either perilously close to my wife's due date or the end of the Summer holidays. Obviously the safe choice was the latter but I'd have preferred late Oct/early Nov as usual.

To those that are coming along this time I look forward to seeing you all on Saturday. To those who would've liked to make it but couldn't, thank you for your support over the years. I may be biased but I think this is certainly the friendliest 40K event on the calendar and that's mostly down to you guys showing up and entering into the non-competitive spirit of the thing. 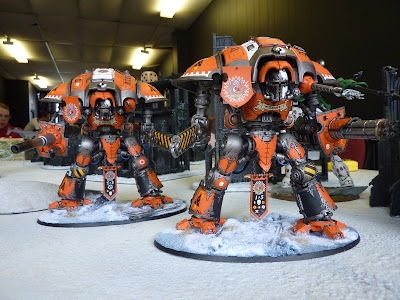 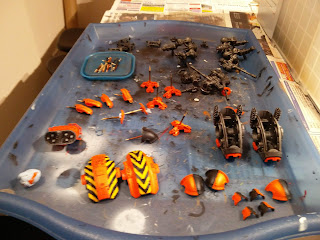 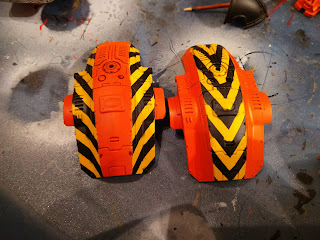 Looking forward to seeing what you guys will be bringing along.
Posted by From The Fang at 13:11:00 1 comment: