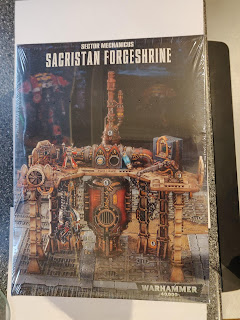 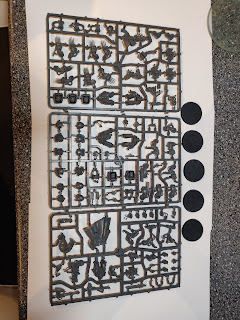 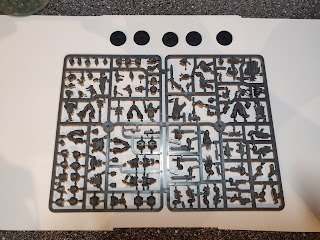 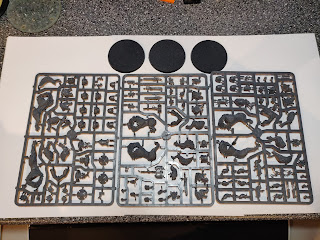 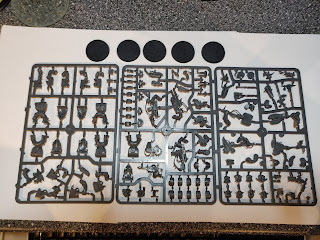 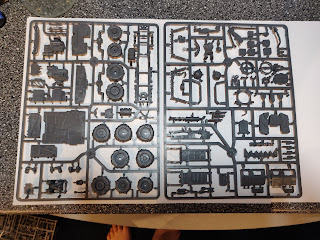 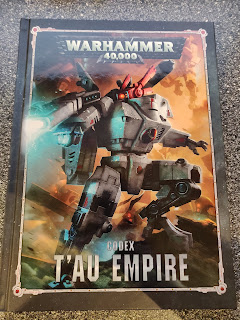 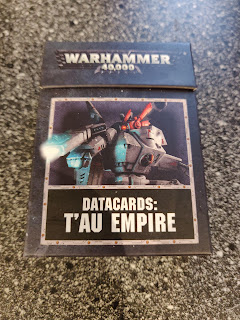 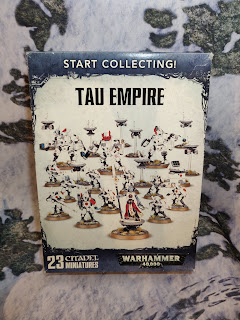 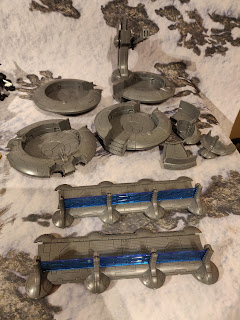 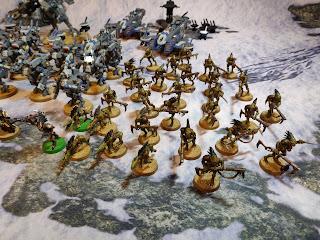 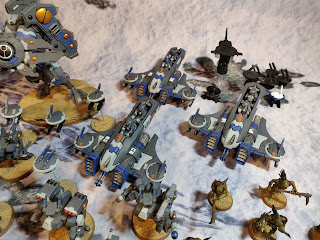 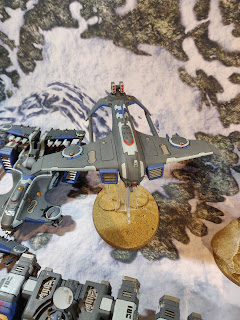 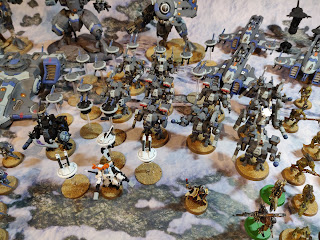 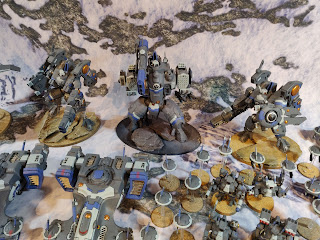 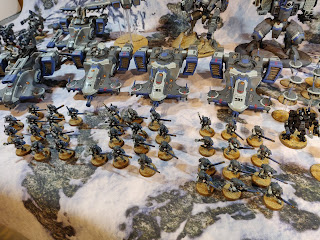 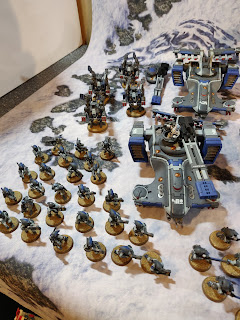 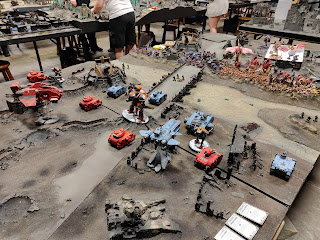 The report of my death was an exaggeration - Mark Twain

Well it's been a while at least! There's a reason I haven't been blogging about 40K recently is because I simply haven't been playing it! Part of that is a result of having a second child but the major factor is the number of excellent board games I now play instead. I'll have to post a top 10 or something similar soon so you can see what I've been playing.

Meanwhile we kept our annual(ish) tradition of Matt, Jamie, Dan and I meeting up at Warhammer World for a big game. This time round it was Matt and I versus Dan and Jamie and we decided to have a 5,000pt game. Space Wolves and Blood Angels (Bloody Wolves for those of you who remember our Doubles efforts) would take on Tyranids in a modified version of Relic. There'd be a central objective as usual but there'd also be five teams three of guardsmen to represent the PDF running from the Tyranids. The Adeptus Astartes had come to liberate the planet from the Tyranids but the PDF had vital intelligence crucial to their efforts. The guardsmen would advance every turn back towards the Imperial lines and could only be killed in combat. Each surviving unit was worth points to us and any unit wiped out was worth bonus points to the Tyranids. We aren't a fan of all the complicated stratagems so decided to stick to the rulebook ones but without the restriction of one per phase. 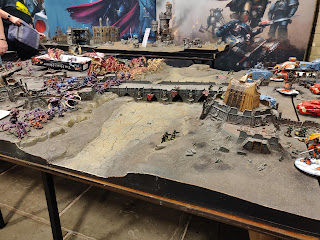 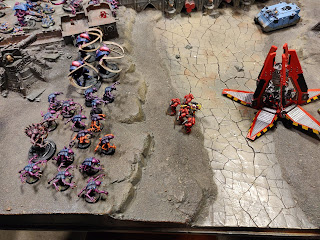 Battle took place on the excellent J'migan Bridge board which we played lengthways to give us more close quarters fighting. The forces deployed on either side of the dry river bed and the Imperials would be taking the first turn. We somewhat foolishly decided just to pile headlong towards the Tyranids with the bulk of the Space Wolves force. The Knights and BA predators hung back to give artillery support. The early volleys managed to take down the tervigon, a venomthrope and a handful of gaunts. I was also able to rack up some wounds on the tyrannofex and the harpy. On the other side the Blood Angels weren't faring so well, the tactical squad that drop-podded in barely managing to kill any genestealers. 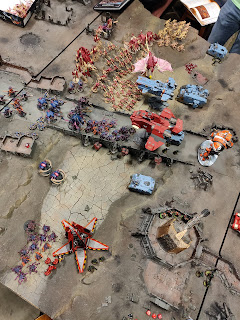 Speaking of 'stealers, Jamie used his large horde of them to tear open the grey hunters' rhino. Fortunate for me that he did since otherwise there'd have been no escape for them. As it was I managed to just squeeze them into a gap to allow them to disembark. Meanwhile the tyrannofex sprayed acid at the already damaged stormwolf and brought it crashing down. Fortunately the Wulfen survived (with help from some re-rolls) and we spent some command points to allow them to attack and kill the harpy before it could swing. Elsewhere the genestealers made short work of the drop pod tactical squad.

It didn't go well for them after that though as the combined fire on the left flank was able to wipe them out, followed by the screamer-killers, taking out the major threat on that side of the battle. The Wulfen charged headlong into the termagants to stop them firing off their weapons, killing them in great swathes. Njal and his terminator brethren piled out of the land raider to go to work on the other gaunts, broodlord and carnifexes. The fire from the knights made short work of the tyrannofex and remaining venomthropes. The most dramatic events were taking place on the bridge itself though. The death company dread managed to take out old one eye only to be killed by the broodlord and Swarmlord, the resulting explosion damaging both in return. This left the blood claws (who'd recenlty left their razorback) and the knight warden to deal with the wounded tyranid monsters. Dante and his assault squad arrived behind the tyranid lines but Dante failed his charge. Astorath and his tactical squad did even worse and both failed to make it into combat. 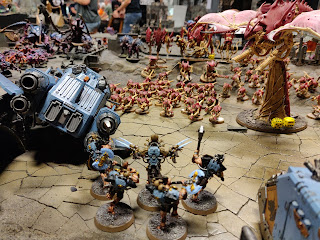 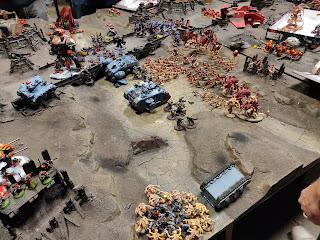 At this point we were feeling pretty good but there was an ominous pile of Tyranid models that had yet to be deployed. Two trygon primes, a hive tyrant,  some raveners, deathleaper and three lictors all now entered the fray. With the genestealers tackling one of the armiger helverins too it looked like we'd soon be surrounded. Unfortunately for Jamie and Dan, most of their reserves failed to make it into combat. This also resulted in them taking some unnecessary wounds to overwatch. This was probably the tipping point of the battle. The Imperial firepower was able to clear out the trygons and lictors keeping the predators and remaining helverin safe. The blood claws dispatched the genestealers on the bridge and the warden made short worth of the swarmlord and broodlord after some poor luck on the invulnerable saves. 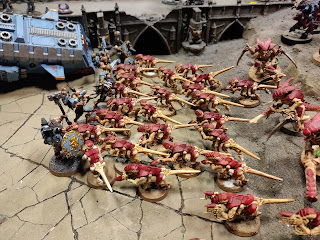 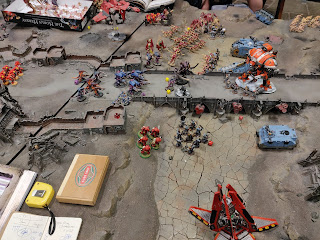 Meanwhile the wulfen continued to cut swathes through the hordes of nids before them, downing a warrior brood before smashing into the zoanthropes. The terminators struggled against the carnifexes but not before Njal had managed to down the broodlord with Smite. The assault squads finally started to do their job cleaning up some other warriors and more gaunts. Dante wasn't so lucky though as the hive tyrant made him look silly. In fact, the way Jamie was rolling his invulnerable save probably extended the game for a good hour! He eventually succumbed to the warden though and by this point it was essentially game over. The remaining firepower mopped up the last of the genestealers and carnifexes. Deathleaper had one final stand against the terminators though, killing Njal but falling to the pack leader's hammer. With time running out, we decided to wrap it up there. It was a clear victory for the Imperium. 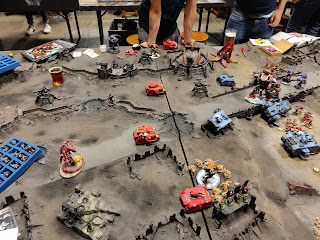 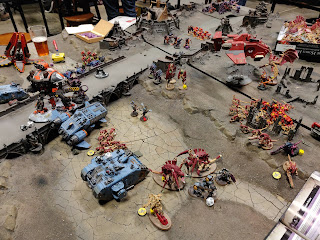 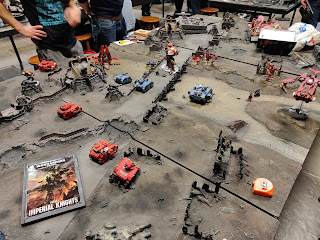 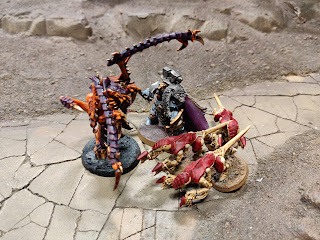 Conclusions
I have to say I enjoyed that more than I thought I would. There's nothing quite like 40K for creating those epic scenes of two mighty armies clashing. It helps a lot when you're playing on beautiful scenery with painted armies obviously. There are some awesome looking photos from the game. The scale is always fantastic and it still creates those moments when a unit achieves something you wouldn't expect it to. I'll happily play the odd game now and then.

However, it hasn't reignited my passion for the game. We weren't rushing but it still took us six hours or so to get through the game. Yeah, we could've played a couple of games with smaller armies but the big draw was the scale of it and being able to play doubles. I had really high hopes for 8th edition. When we went to Coventry for Warhammer Fest, just before the launch of 8th, I remember listening to the speakers and thinking, "they finally get it". Fast forward to now and I think the game has a lot of the same problems creeping back in. When the indexes first came out we had a very streamlined game, albeit with a lack of flavour. We're now back to a similar level of silliness with stratagems, faction abilities, etc. In 5th and even 6th edition, I could show up to a tournament, look at my opponent's army and know exactly what to expect. That just isn't the case now. Only someone who lived and breathed the game (and played several times a week), could hope to remember all the combos of armies, stratagems, etc. That takes away a lot of the strategy and puts too much emphasis on list building over generalship.

I was glad, therefore, that we didn't use any of the faction stratagems. Even so, all the re-rolls and modifiers still make things complicated. This is a problem GW created by sticking with a D6 system. I'd hoped we might see a return of D4, 8, 12, 20, etc. That would give more options for differentiation between units and weapons without having to add re-rolls. There's also some of the same nonsense that has always plagued 40K. Why would a unit of marines sit in their rhino, surrounded by genestealers and just let them tear the vehicle apart killing them in the process. They'd throw open hatches and fire off their bolters or slam the ramp open, squashing a couple of aliens and come out guns blazing. It's moments like that which ruin the flow of the game and detract from the willing suspension of disbelief. It's like the moment in a film where the hero makes a miraculous recovery or similar, jarring against the immersion of an otherwise entertaining movie.

There are a lot of positives to be taken from the current "new GW" though. They're engaging the community in fantastic style, something I never thought I'd see from them. Not only that but they're taking ownership of the competitive scene and tinkering with rules to try to keep certain builds from dominating.

All that being said, it just isn't a good enough game to take my attention away from the huge array of excellent board games that are frankly much more enjoyable. Like I say, I'll try to post up some reviews, top 10s, etc. In the meantime, I've put quite a chunk of 40K stuff up on eBay to cut down my collection significantly. I've amassed quite a pile of Tyranids too as I'd intended them to be my new army for 8th. I still enjoy the hobby side of things so they might get painted up. Facing them in this game has definitely made me want a fully painted horde. Just a shame they won't see battle much.
Posted by From The Fang at 13:03:00 2 comments: