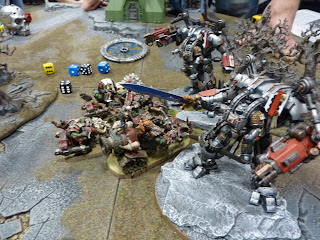 Our first game on the second day of the tournament saw us facing Will and Andy and their Ork army. We'd be playing Crusade (3 objectives) on Hammer & Anvil deployment. Before I get into their list it's worth mentioning that the Will in question is Will Hayes of Forgeworld. The man responsible for some of the best Forgeworld models including the titans, Tau Manta, a lot of the Ork stuff. It seems, looking now that he's actually design most of the stuff on the FW site!! Talented guy, that's for sure.

Anyway, onto the battle itself after that spot of man-love. WIll and Andy were fielding (again from memory and getting hazy at this point):

Battle Report
We won the roll off (yet again) and decided to go first. We deployed pretty much identically to how we had in all our games. Dreadknights, TWC and purifiers in the middle right on the edge of our deployment and everything else in various forms of reserve. Will and Andy deployed one boyz mob with Zogwort on their left flank with the rest of their army over towards the right. They rolled for their controlled objective and got a Skyfire Nexus which would come in handy later as the dakkajets were, of course, in reserve. 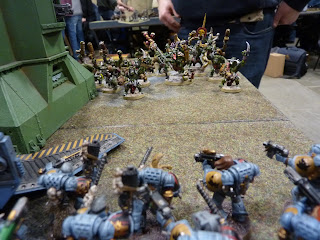 I brought the drop pod down in front of Zogwort hoping to gun down a good number of orks. I managed to kill 7 which was about average and would help a lot in the inevitable assault. The dreadknights teleported forwards and incinerated a few bikers but could only score a single wound on the nob bikes. Everything else just advanced as fast as possible.

In return Zogwort unleashed his psychic potential. He got off his psychic attack and rolled "Frazzle" which is an S6 AP3 blast. I'd failed to spread out my grey hunters and when he hit with the template I took off 7 models. I was whilst I was doing this that I remembered Deny the Witch and, much to Andy's frustration, I rolled a 6 and promptly put the models back (it was good of them to allow us to do this). The rest of the mob made up for it though by managing to kill 5 grey hunters with shooting after I failed all but one of my saves. 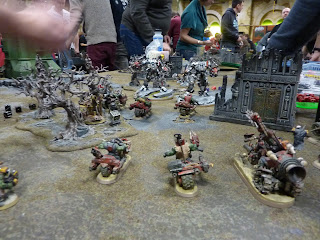 In the centre, the nob bikes drove straight round the two dreadknights and lined themselves up to charge the thunderwolves. Their shooting managed to kill the storm shield bearer outright and the resulting charge was just as effective. With their Hammer of Wrath attacks they were able to kill another wolf! I was left with my power fist which, with its S10, should be able to cut down a few bikes. Unfortunately, I only managed to hit with one attack and the return hits from the powerklaws made short work of the wolves giving our opponents First Blood.

Elsewhere, Andy was asking about the dreadknights and sighing every time we told him about their rules. In particular the fact that they're characters. This makes them excellent in challenges. He also wasn't pleased about them being S10 AP2 and striking at normal initiative. We pointed out that Will should take it up with Matt Ward next time he saw him. Needless to say, being Orks they warboss still charged and quite rightly challenged leading to his swift demise. This made his remaining warbikers flee the field. The large ork mob charged the remaining drop pod hunters and miraculously they survived and killed a few orks in the process.

The purifiers were able to gun down the nob bikers without the need to charge them. The combination of the wolf priest's preferred enemy fire and the dreadknight was enough to not only kill off a fair chunk of the remaining boyz mob but also kill a biker and force them to continue fleeing. The remaining boyz were cut down in an assault from the dreadknight. Meanwhile Zogwort and co. were finishing off the grey hunters. One of the two dakkajets arrived and put some wounds on the purifiers. Brilliantly, Matt had put Coteaz at the front who was lucky not to be insta-killed by the supashooters. 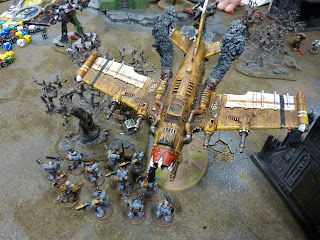 The dreadknights headed over to help finish off Zogwort and his boyz. Matt attempted to gun down the dakkajet but could only strip a hull point. However, he had, at least, managed to make him Evade. This saved the wolf priest's grey hunters from getting gunned down. They responded by using the skyfire nexus to full effect and blowing up the stricken dakkajet. The second dakkajet arrived and this time was able to gun down Coteaz and a couple of purifiers thanks to a Waaagh! volley. A ranged attempt to down a second flyer from the Wolf priest's squad managed to inflict a Locked Velocity result. This meant that he'd need to move 36" in the next turn. Whilst all this had been happening we'd been merrily walking on our warrior acolytes onto an objective. The dakkajet was forced to zoom over their heads though and would fly off in the next turn. Our opponents conceded here and with two objectives in our control we secured a solid 8-2 victory.

Conclusion
To be fair to Will and Andy this was the sort of army that will always struggle to deal with ours. They were pretty unlucky to give us a skyfire nexus but by that point it wasn't likely to matter as at some point the dakkajets would either leave the table or else not be in a position to shoot us. 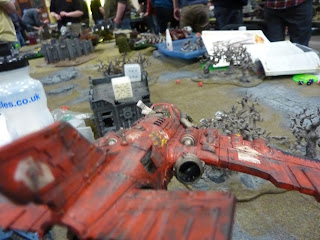 They did give us a scare though. The loss off the thunderwolves was a shock and had I not made that Deny the Witch roll the grey hunter pack would've succumb to orky shooting and hence Zogwort's mob would've been much stronger when they met the purifiers/dreadknights. To be honest there was no need to put the drop pod that close and frankly I perhaps should've focused more on the objective that we never managed to secure. In a tournament where absolute victory points are being recorded, this is the kind of thing that makes a big difference. From their position on the flank, Zogwort's mob would've had to slog it over to our lines whilst we were dealing with everything else.

This was certainly our most visually stunning game. The Forgeworld ork bikers (designed by Will I think) are gorgeous models and their painting had certainly done them justice. The dakkajets were both beautiful examples too. They were quite rightly nominated for the best painted army (more on that soon).

Another thoroughly enjoyable game for us. I'm not convinced Will and Andy had much fun as we told them about the, frankly ridiculous, dreadknight rules!
Posted by From The Fang at 19:03:00