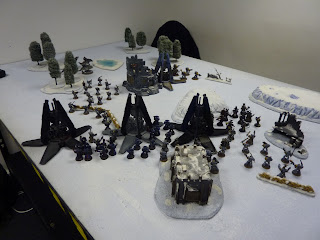 This post was delayed a little bit by the DA models but I still wanted to get it up as my first detailed report from 2013.

Having only recently discovered that The Outpost in Sheffield existed (it's been around for 18 months), Jamie and I decided to head down there last Thursday to check out the gaming facilities on offer. I'll get to that after the report though. The game itself saw my attempt at a foot wolves list take of Jamie's crimson fists drop pod extravaganza. I'd got 3 full grey hunter packs, two 5-missile long fang packs, rune priest, wolf priest with saga of the hunter, 4 thunderwolves and Arjac with some terminators in a drop pod. Jamie had 5 drop pods (2 tactical, 1 dread, 1 sternguard and 1 command squad) plus a land speeder tornado and land speeder storm.

Battle Report
We were playing Relic on Dawn of War and at this point I didn't know what Jamie had in his list. Sometimes this makes the game more interesting as you have to react to what appears out of the figure case! Anyway, Jamie won the roll off but unsurprisingly gave me first turn. I deployed nice and spread out and then started to realise what Jamie was bringing when he only deployed the land speeder storm. My drop pod slammed in near the speeder but scattered meaning there were trees between me and the skimmer. The long fangs took a pop at it but thanks to heavy cover they failed to hit the mark. 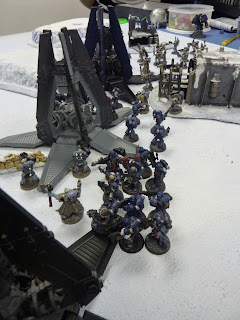 Jamie's first wave of drop pods hurtled down from the upper atmosphere and their explosive bolts blew to reveal a tactical squad, sternguard and Pedro Kantor's command squad. The sternguard made short work of the rune priest and one of the long fang packs whilst the tactical squad inflicted heavily casualties on the other The command squad killed off a handful of grey hunters. The drop pods were pretty close to my deployment zone which left my thunderwolves and terminators well out of the fight for the time being. Having lost one long fang pack entirely and most of the other things weren't looking great. I also wasn't sure how I was going to take on the command squad with all of their power weapons.

The wolf priest outflanked his pack (I actually used the Acute Sense re-roll!) and with help from the other hunter pack they rapid fired the command squad. Sadly thanks to poor rolls and artificier armour there were only minimal casualties. The remaining two long fangs managed to take a hull point from the land speeder storm but little else. Meanwhile the last of the three grey hunter packs turned back towards their deployment zone and unleashed a punishing salvo of fire which killed one of the sternguard combat squads outright.

The final two drop pods arrived with a dreadnought stomping out of one and a pair of tactical combat squads from the other. The dreadnought's shots went wide of their target as the dust settled from the drop pod crashing to earth. The tactical squad were similarly unlucky and between them and the remaining sternguard only a handful of grey hunters perished.  The command squad shot and then charged the already dwindled grey hunter pack on the right flank and easily killed them off but lost one of their number to overwatch and a further marine in combat. The wolf priest's squad were shot and assaulted by the scouts who'd hopped out of the speeder but overwatch killed a couple and the remaining scouts were smashed down by the wolf priest's crozius arcanum. 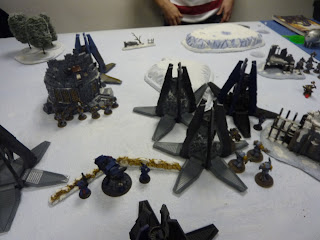 A terrifying volume of fire from the wolf priest's pack saw the command squad totally destroyed. The terminators were now back in the fight and easily killed off a tactical combat squad in combat. The grey hunters multi-charged two more combat squads and finished them off over a couple of rounds. A charge from the thunderwolves was thwarted by the dreadnought smashing the fist wolf before he could strike (I really shouldn't have been greedy in multicharging) but the sternguard suffered casualties.
The dreadnought killed off the remaining thunderwolves who failed to kill the remaining two sternguard.

With our time running out (on the car park) we decided to call the game there. The grey hunters held the relic and with the terminators roaming free with little the remaining Crimson Fists could do about them it was unlikely to take long for the Fists to triumph.

Conclusion
Well at least I've managed my first win of 2013! It was a fantastic, dramatic game with the advantage swinging back and forth. When the first wave of drop pods came down and I lost most of my long fangs I worried that the sheer weight of fire from the sternguard and power weapons from the command squad would prove to much. Unfortunately for Jamie the command squad was too good at their job and easily killed the grey hunters leaving them vulnerable to return fire.

After the game we discussed the effectiveness of our respective forces. I think the amount of fire and versatility of the drop pod list could be too much for some armies but there was a big advantage from me not knowing what I was facing. Had I known then I'd have castled around the relic and made it very difficult for Jamie to wade through my force to get to it. The speeders are a bit of a weak link in some ways but the scouts in the storm could be useful for some late objective claiming if the speeder can survive long enough. I suggested that with a lot of flyers around Jamie might be better ditching the speeders and his librarian (in the command squad) in favour of a couple of stormtalons. This would allow his entire army to be in reserve as well as adding some much needed heavy firepower and anti-aircraft support.

The footwolves worked pretty well but an army that came to them wasn't really a test of their weakness which is obviously in trying to cover ground. The outflanking and drop podding shenanigans help buy some time but despite a high model count the other hunter packs may struggle to reach their enemies in one piece.

A final note on The Outpost
The table we played on had a nice ice theme and overall the scenery on the tables around us looked decent. The tables were set a little high but there was plenty of room underneath for our stuff. Call me a lazy git but I was a bit disappointed that there weren't any stools. I do spend a lot of the time on my feet but find it's nice to take the load off, especially if it's going to be an all day session.

It was nice to have a change of scenery (literally) but since you either pay £2 each to play or £100 for a year's membership I think I'm unlikely to rush back. If I played every week that'd still only be the same as playing the £2 every time. The discount on tournament entry isn't worth much unless you want to be playing in one a month and other stores in Sheffield offer a better discount without having to pay upfront (not to mention internet retailers). I think, in a hobby that's expensive enough it's a shame to add another cost. I will be heading back in late February however to try out one of their tournaments mind you.

Overall I can't complain at having a facility like this in my home town but I think their pricing structure is a bit steep even if you played once a week. Now I understand that they lack the bar that makes other venues their money but still. I suppose if you weigh up the cost of building your own table and supplying scenery then it isn't much different. With the money they're presumably making from the membership I'd expect the tables to be of a higher standard too. At the end of the day centres like this are great for the local gaming community but I'm not motivated to head down there, pay to park and then pay £2 to play when I've got a table at home. To those that don't then fair enough but for me it's a no brainer.

And finally....
I've actually made a start on my scenery after months/years of procrastination! 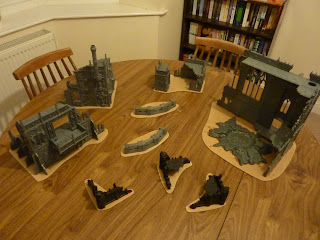