First Gaming of the New Year 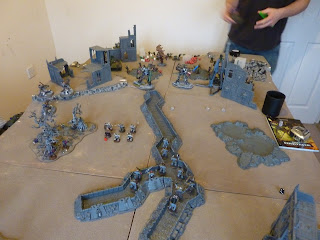 Matt was over today for our first gaming session of the new year. We managed to fit in two games of 40K and two bloodbowl matches. Here's a brief rundown of the games.

Game 1 - SW/GK vs IG/Daemons (40K) - 1500pts
As testing for the Battle Brothers tournament at the end of the month we pitted our Titanic Fenrisians against IG with daemon allies. The game was The Scouring on Hammer and Anvil deployment. I took the first turn with the SW/GK.

A drop pod slammed down near one of the traitor guard's chimeras. The occupants made short work of the transport and the occupants took casualties in the explosion causing their nerve to break. The two dreadknights teleported forwards and incinerated further heretical infantry. The bloodthirster and daemon prince arrived in Matt's first turn. The bloodthirster scattered leaving him impotent for a turn. The daemon prince incinerated 5 grey hunters with its Breath of Chaos. Fire from the guardsman wounded one of the thunderwolves. 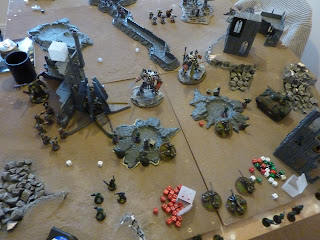 The purifiers who'd been advancing up the centre failed to blow up the remaining chimera meaning the thunderwolves were forced to charge it to destroy it. The grey hunters in the centre managed to shoot down the deamon prince and cause it a wound as it slammed into the ground. The dreadknight set it alight but caused no damage. The resulting combat saw the dreadknight defeat it over a couple of turns. The other dreadknight incinerated a heavy weapons team. The thunderwolves took casualties to the guardsmen who'd been evicted from the chimera. The bloodthirster then easily finished off one of the dreadknights. A little while later it did the same to the other dreadknight.

The thunderwolves only killed a single guardsman in combat and somehow managed to die in the process. This would be the turning point of the game. The plaguebearers arrived on a 4 pt objective controlled by some warrior acolytes. Over the remaining turns the vendettas arrived and dealt some damage. The bloodthirster killed off the purifiers and with the grey hunters struggling to shift the plaguebears the match was comfortably won by Matt's army.

Game 2 - Orks vs Humans (Bloodbowl)
As a bit of a warmup to remind ourselves of the rules we played the classic matchup of humans and orks. My humans struggled from the start with me failing crucial rolls left right and centre. The orks scored one touchdown in each half and I struggled to even make a consolation point. The problem I have is that I'm simply not used to playing games with passing teams as I usually favour dwarves or orks. 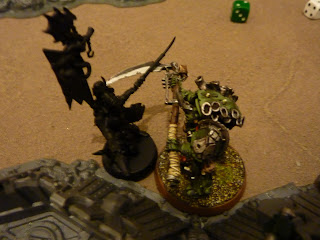 Matt fielded a typhus zombie horde, 57 strong, with a heldrake, obliterators, daemon prince, vendettas and plenty of guardsmen in support. I'd be fielding my current favourite DE list with Duke Sliscus and trueborn in a raider, 2 wych raiders, 3 kabalite venoms, 3 ravagers and 9 reavers. I managed to get a free pain token for my Combat Drugs and also seized the iniative which filled me with hope, at least at first....

The ravagers did what they always seem to do for me and missed most of their shots (I think the forget they're BS4). They could only wound the daemon prince once. The trueborn and the venoms were equally pathetic and only managed to kill a handful of zombies. The return fire from the guardsmen killed a venom and two raiders but with minimal casualties. The wyches were charged by the daemon prince and failed to cause any wounds resulting in their deaths after a second round of combat.

In their second turn the reavers swept from their position on the left flank and hit the guardsmen on the quad gun with bladevanes wiping out the squad. The ravagers continued to be pathetic but between them and the kabalites they did at least kill both of the obliterators. The rest of the army continued to chip away at the zombies. The remaining wyches had managed to avoid being charged by the second horde and therefore easily wiped out an infantry squad. They were then successfully charged by the horde and finished off over a few rounds of combat. The reavers were easily eradicated by the daemon prince and things were starting to look bad. Duke Sliscus and co. were evicted from their raider and hit by the heldrake's baleflamer. The remaining trueborn managed to kill more zombies but little else before they were wiped out by a second blast from the now hovering heldrake.

The DE vehicles were slowly picked off by the guardsmen and with me now lacking the firepower to kill off 30+ zombies in time the relic was safely out of my reach. The only consolation might be that Duke could kill Typhus in combat if he made enough Shadowfield saves. Despite taking Typhus down a couple of wounds Matt kept passing 5++ saves and eventually Duke's shadowfield flickered out and he was instantly killed.

Game 4 - Dwarves vs Skaven (Bloodbowl)
Hoping to at least come away with one victory from the day I was pleased when Matt failed on two successive turns to pick up the ball. I was able to keep the rat ogre down with my troll slayers (though kept failing to break through his armour) and capitalised on Matt's fumbling by scoring a touch down.

Over the next few turns I was able to smackdown more rats and things were looking good as we neared half time. With the final act of Matt's turn 8 he managed to pick up the ball within 4 squares of his endzone, run forwards and throw a long bomb (needing a 6 which he did thanks to a Pass re-roll) to another rat who unbelievably caught the ball despite being in two tackle zones and then dodged out of the tackle zones and went for it twice to score! That's a pretty ridiculous amount of luck on Matt's part and at the half way point I was shocked that the score was tied.

In the second half more gutter runner shenanigans saw me going a goal down. Sadly we ran out of time shortly after but by this point Matt had injured both of my runners and I was struggling to keep on top of his agile rats with 9 men.

Conclusion
Well that's a hell of a start to my gaming in 2013. Nothing from 4 games! I think the Bloodbowl games were actually pretty close on reflection and both were pretty enjoyable with some great moments. It's made me more determined than ever to get my dwarves painted up and start playing more games. They're nearly finished so hopefully I'll get photos up this weekend if I managed to get them done.

It's a shame I couldn't have won with the dwarves. The main problem was with armour rolls. I put down rats left, right and centre but you know things are going badly when you've got more dwarves injured than skaven!! Back to the xbox for some more practice I think!

The 40K games were prett demoralising really. Both felt like they were promising early on but reached a turning point after which I felt like I had no chance of winning. Granted this is normally me attitude in 40K and I accept that it's part of the problem but still I can't say I enjoyed the games.

The zombies have met a mixed reception on the internet. Some think they're brilliant whilst others see them as a gimick that doesn't work in competitive play. I have to say that particularly in games with minimal objectives (especially Relic) they're nigh on unstoppable. If you don't have templates of some description then you'll struggle to chip away at them. Granted I was using mostly 4+ poisoned fire so some armies would find their T3 less of a problem. My wyches really needed a bit more punch to deal with them in combat and S3 didn't really cut it.

As with any horde they require a large volume of fire to put down. The difference with these guys is not only do you have to shift 30 bodies but also they're Fearless. Now, I think the changes to the Fearless rules are the biggest mistake in the 6th edition book. Allowing units to gain a significant benefit from a rule without an obvious downside is always frustrating. In 5th edition you could hope to cause a lot of casualties in combat but now you can settle down for a looooong slog to try and whittle them down.

Well let's just hope that my second day of gaming in 2013 (tomorrow with Jamie) works out a bit better or I might have to rethink this hobby malarky!!
Posted by From The Fang at 17:00:00