In the old days the Troops section was the real meat of the book. This was, of course, due to only Troops being scoring units (well mostly at least). If you're taking a Combined Arms detachment there's still some call for them to take advantage of Objective Secured but in a faction specific detachment they're less of a necessity. Indeed, if anything they feel like a tax you have to pay to be able to start taking some of the good stuff. This was never the case with the old SW book as you wanted to take plenty of Grey Hunters since they were frankly awesome. Let's see if that's still the case but there's the small matter of the Blood Claws first. 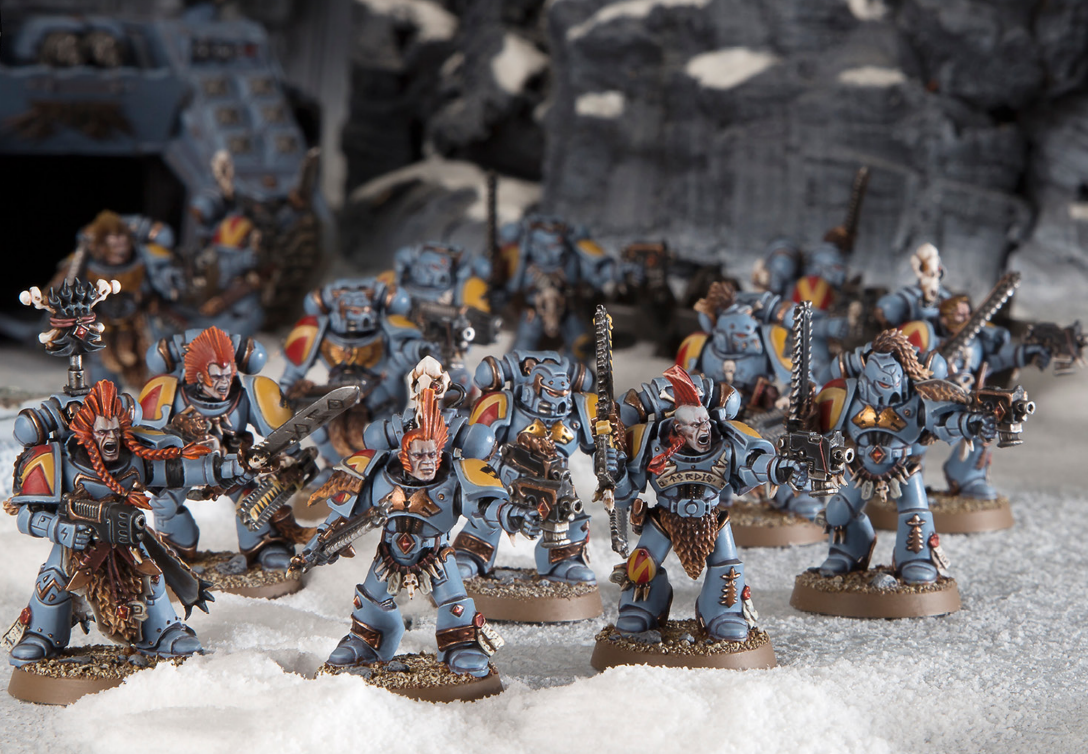 These guys were nearly always overlooked in the old book thanks to Grey Hunters being vastly superior in a number of ways. That's set to change with the new book as they're no longer the same price. I'd like to point out that contrary to the picture in the codex, you don't have to be ginger to be a Blood Claw. Anyway, they're now 2pts a model cheaper than the basic Grey Hunter. They start with a pistol and chainsword which means they're already getting 2 attacks which increases to 4 on the charge with Rage. That's pretty good for such a low cost.

Of course their WS and BS are lower than a Grey Hunter but I'm not sure that's such an issue and their other stats are identical. The problem used to be Headstrong which meant you couldn't really control them unless you had a character. That's gone now so their low cost makes them a compelling choice. They lose an attack if they take a special weapon though and you need 15 of them for a second both of which are more expensive especially the second weapon which used to be free. You can now upgrade a model to a wolf guard to give them Ld9 too. You pay for the Blood Claw and the upgrade which makes them more expensive than the old wolf guard.

Coming back to the WS/BS thing. They've only got pistols so BS3 isn't a huge problem and you could take a flamer as the special weapon negating the BS completely. The WS is barely an issue when attacking but it makes them more susceptible to hits in response but you could take more of them to compensate. Using a LR Crusader or Stormwolf seems an obvious choice and they can now take the latter as a dedicated transport which is tempting. I'd personally run them with a single special weapon and a wolf guard in a pack of at least 10 (unless you're going for minimum troops of course). 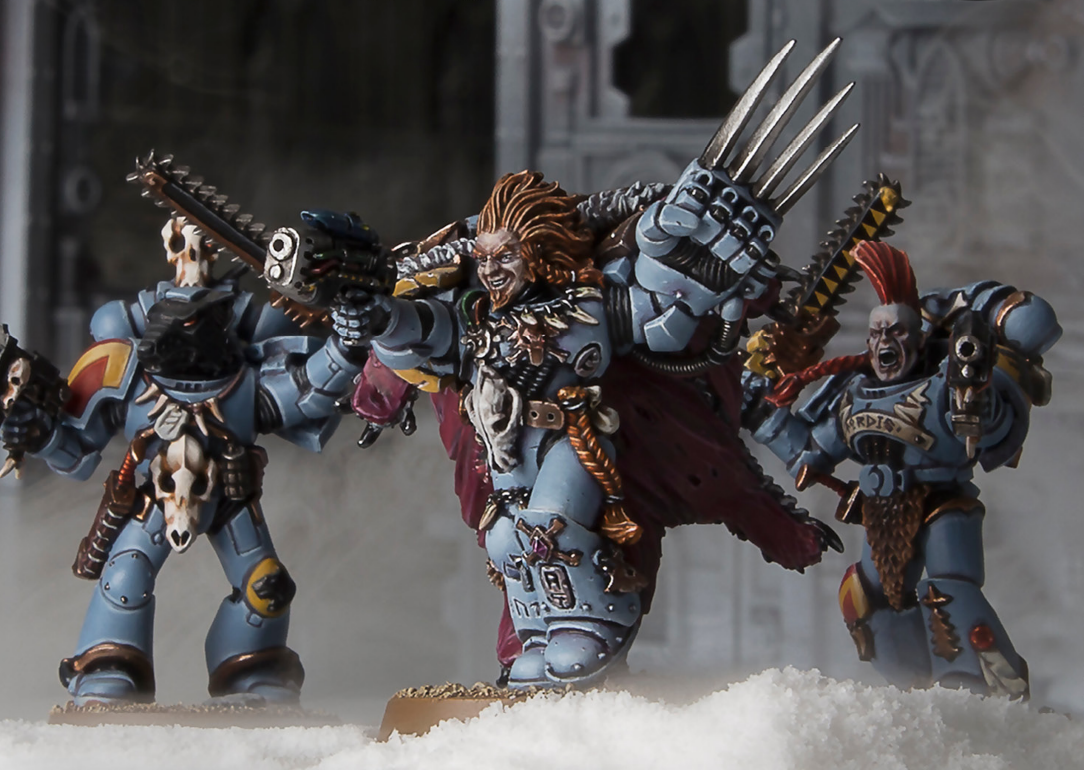 In the old book Lukas was an upgrade character for a squad of Blood Claws meaning he couldn't be challenged out etc. He's now a fully fledged IC with all of the problems and rewards that brings. He must join a unit of Blood Claws though but doesn't take up an FOC slot.He's pretty much half the price he was before which is awesome and makes me pleased I didn't sell the model I've had for a long time unpainted.

Despite the massive price difference he's actually just as good if not better than before. His Rebellious rule still prevents Ld higher than 8 (not a huge loss) but his Last Laugh is now slightly worse as you have to win the roll off whereas before you could draw. Still, the potential to remove an enemy character even when you lose the combat is almost worth his points alone. Challenge a Bloodthirster, lose and then literally have the last laugh if you win the roll off! His Pelt is slightly different now in that it reduces the enemy's WS by 3 instead of forcing re-rolls to hit. That's pretty powerful and without doing the maths probably works out better than before a lot of the time.

I like Lukas a lot and with Blood Claws being more likely to feature in my lists I can see me using him finally and I can't wait. 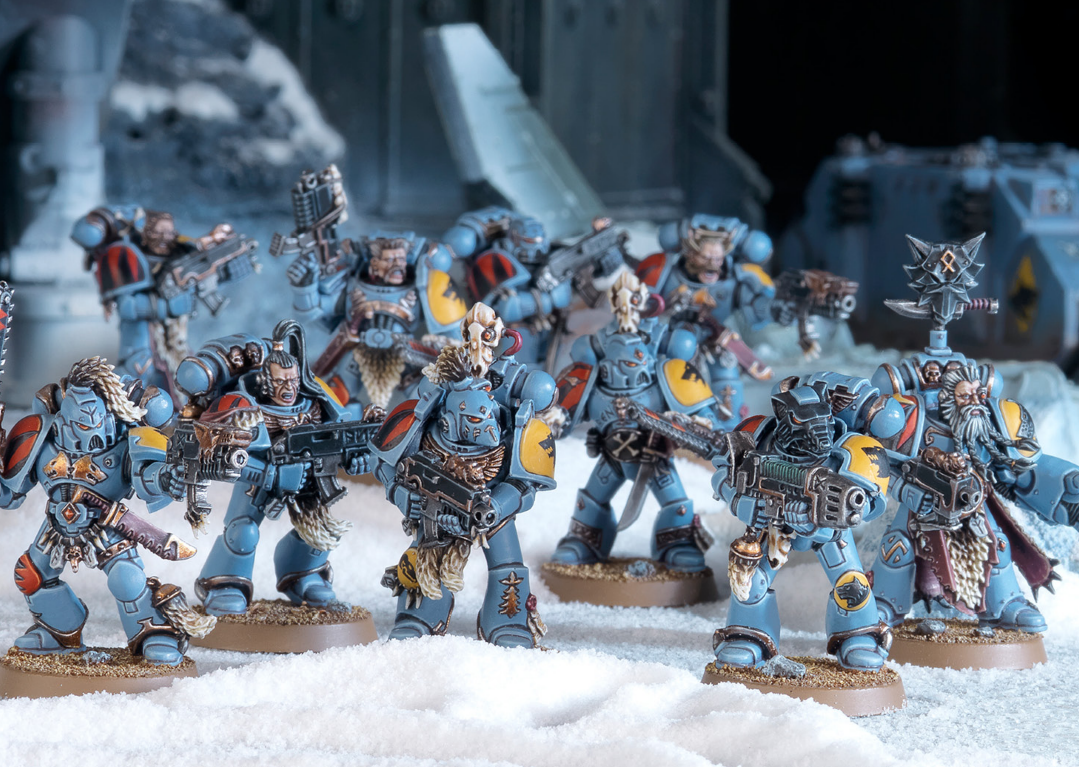 The rumours about Grey Hunters losing their extra weapon were pretty scary to a lot of Space Wolves players. Thankfully, as we hoped they can still take both a bolter and two melee weapons but they took a 1pt increase to do so. You can run them without of course but then they're just tactical marines with Counter Attack. If you're not just taking mandatory minimum troops then I think it's worth having that close combat weapon nearly every time. They're better off in the thick of it rather than shooting anyway. The basic grey hunter, though slightly more expensive, is the same guy we know and love then.

What's changed though are the upgrades for the squad. For starters the special weapons base cost has increased by 5pts across the board (bringing them in line with other SM armies) and the second weapon is now longer free. That means the basic squad is even more expensive then. The other weapon upgrades (i.e. power weapon/fist and plasma pistol) are the same cost though. You can now upgrade a model to a Wolf Guard but they work out even more expensive than the Blood Claw one which seems a bit off when they're effectively the same. The standard power fist and combi-melta loadout is 10pts more expensive too with the model coming in at a whopping 59pts which is about a third more expensive.

The big deal for me though is the loss of the wolf standard and mark of the wulfen. In the old book these two things made an already great unit feel pretty unstoppable. The standard may have only lasted for one assault phase but during that phase the hunters felt invincible. The wulfen was a great way of potentially getting some more AP2 hits and gave more attacks if nothing else. The current for of the wolf standard has been made one per detachment and is 15pts more expensive. It no longer gives re-rolls of 1s but instead gives a 12" morale re-roll bubble and a 6" bubble giving an extra attack. It's difficult to sit down and work out if this is better or not as although the new standard is less powerful it can work for the whole game potentially. It's a bit more of a problem losing the model with the standard now though.

Conclusion
If you aren't interested in Troops for anything other than the mandatory compliment then Blood Claws are going to be the way to go. Blood Claws used to lose out greatly to Grey Hunters but with the hunters losing a lot of their good stuff and claws being cheaper it's now more difficult to choose. I'm pleased that you can now reasonably include both without feeling like you're gimping yourself as it lends itself better to the fluff if nothing else. I don't think us SW players can really complain about the hunters. Yes, they're more expensive now and less deadly but they're still an awesome troop choice that a lot of armies would kill to have.

It's a shame the wolf guard have become so much more expensive and it feels a little ill thought out. I suppose it brings them in-line with other armies but that isn't something I like the sound of. Of course you still get the option of terminator armour which other armies can't do but that's adding further expense. I'm not convinced it's always worth taking the wolf guard any more except for the extra character to protect an IC from challenges. It's good to note though that the wolf guard is included in the squad size for taking a second special weapon though so you can have two meltas and a combi-melta in the squad.

Finally, I think Lukas is something you'd take for a bit of fun. I'd be tempted to chuck him in a Stormwolf with some Blood Claws and throw him at the most dangerous character you can find just for the chance of removing it from play!

Right, that was a nice short section. Onto the vastly oversubscribed Elites section then....
Posted by From The Fang at 17:00:00