This is the final post in my review of the Space Wolves codex and I come to Logan Grimnar who is probably the most controversial model GW have released in a long time. The community seems to be split on what has been dubbed "Space Wolf Santa" but let's see if the rules might sway people. I'll also talk about the formation in the codex and the rules from the supplement. 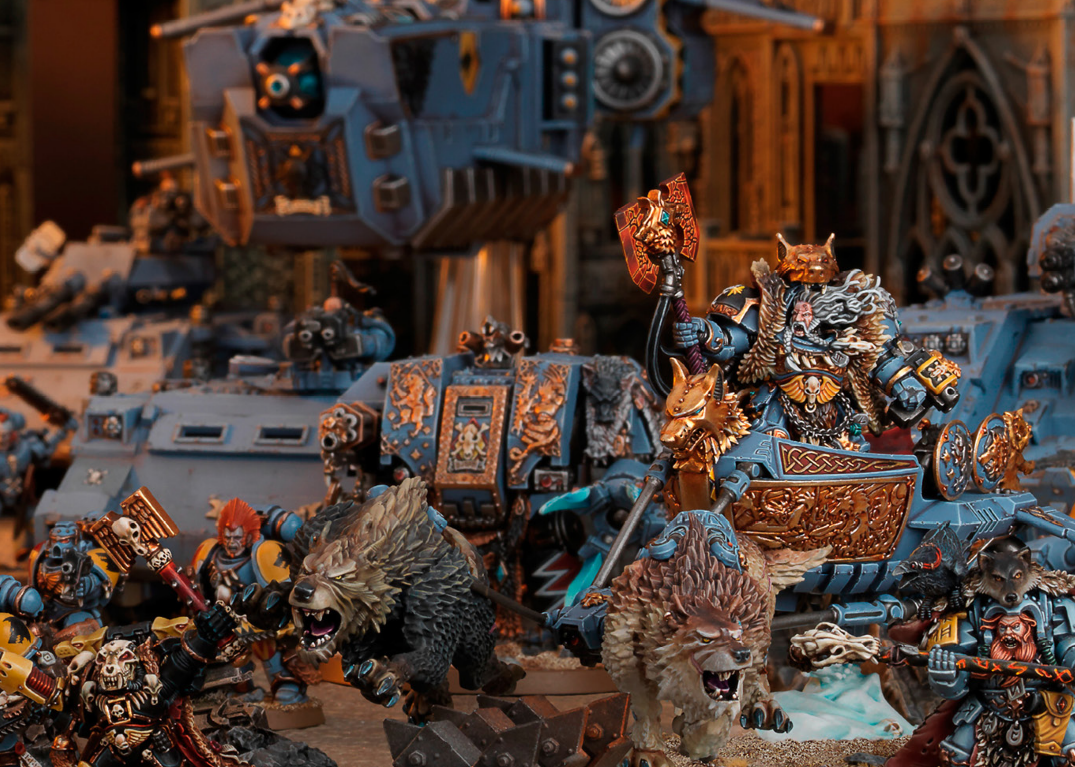 Frankly, most people took Logan in the old codex just for the chance to run an all terminator army as he made Wolf Guard troops. That rule has gone now but since everything is scoring it doesn't make much difference. Of course it stops you running more than three units of terminators though (outside of the the supplement - see below).

The man himself has dropped in points significantly but there's a reason for this. His Living Legend and High King abilities have been completely removed. It seems Logan has become a lot more selfish. Otherwise he's still an Eternal Warrior (with an extra wound thrown in) and has kept his other generic special rules. His warlord trait replaces his old saga, increasing its range to 12" and adding re-rolls for Pinning too. The Axe Morkai, like other frost weapons, now gives +2S making him S6 AP3 at initiative 5 which is great considering he gets 6 attacks on the charge. If you choose to use the two-handed version he's essentially got a power fist as before. Effectively he's still the same in combat then but he's lost the potential for Preferred Enemy that High King used to grant.

Let's talk about the elephant in the room then, his chariot (or sled depending on your view). It comes with a hefty price tag but is an AV12 3 HP vehicle with a 4++ save and also converts pens to glances. The wolves pulling his chariot also give him an extra four S5 AP- Rending attacks at I5. Of course this all means he's on his own though as he can't join units when mounted on Stormrider. It's worth having a read of the chariot rules at this point as they've changed from 6th. For example you can assign hits from shooting to either the chariot or Logan which can effectively give him a couple of extra wounds. Also you get D6 S6 HoW attacks on the charge. That makes him pretty badass if you ask me. He'll be pretty tricky to shift and will cover ground pretty quickly to smash into combat.

I guess it all comes down to whether you can stomach the model or not then. Personally the chariot is growing on my but I think I prefer the old Logan.

Great Company Formation
Before I move onto the supplement I just want to briefly talk about the only formation in the codex. It involves taking one of everything except TWC. There's quite a list of units there and even without upgrades you're talking around 1,000pts. Depending on the points limit that basically means this formation is your whole army. I personally find the formation a bit restrictive as there are units in there such as wolf scouts (and to an extent long fangs) that I probably wouldn't take. You get exactly the same benefits as the Wolves Unleashed detachment but also everything causes Fear (which is rarely useful) and has Furious Charge (which is pretty good). I'm just not sure Furious Charge is worth the restrictions. I'll have to give it a go at some point though I suppose.

An army chosen with the formations or detachment in the supplement gets a few special rules. Sagaborn means all characters must issue or accept a challenge. It clarifies quite nicely that you can choose which character accepts but generally I'm not a fan of being forced to challenge. Of course, knowing this rule is in play you'd equip your characters accordingly. Also, it isn't as big of a deal as it was with the changes to challenges so that attacks spill over into the rest of the combat. What helps too is First Among Equals which gives wolf guard and TWC characters Preferred Enemy (Characters) in challenges. 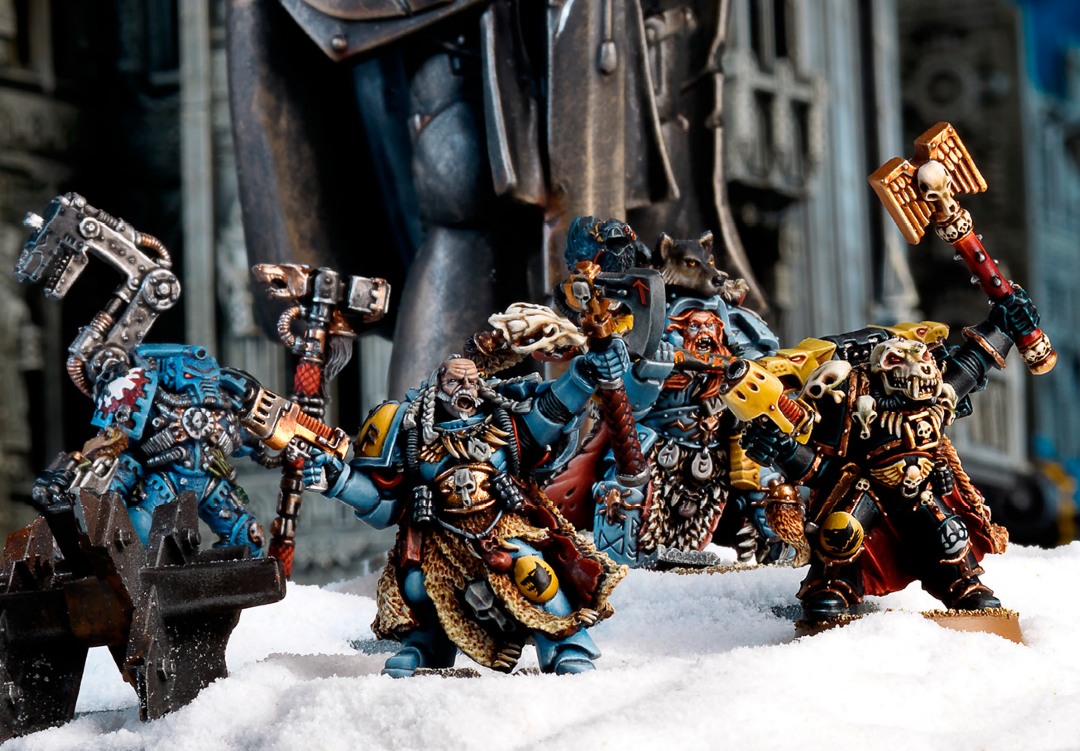 There are some decent offerings here. Re-rolling a single saving throw every turn could be awesome for a 2+/3++ character. Re-rolling to wound isn't so great as you're already getting Preferred Enemy, like wise Master-crafted is only a minor buff at best. The last three are better giving Outflank, Fearless or Preferred Enemy to the warlord and his unit. Basically then a 50:50 chance of something useful which makes them better than the standard codex options most of the time. It's worth bearing in mind that you can still take traits from the codex or rulebook instead if you wanted.


Generally speaking they're better than the codex relics but I still don't see a lot of point in splashing out on them in competitive play.

Company of the Great Wolf Detachment

This is essentially the mechanism for getting an army of terminators with 1 HQ and 2 Elites as the only compulsory requirements and a further 6 Elites been an option. Troops are limited to 3 units and you can take upto 4 HQ but there's still 3 fast, 3 heavy, 1 fort and 1 lord of war. Obviously you get Sagaborn and First Among Equals but in addition you get the standard trait re-roll (only on the supplement traits) plus the Kingsguard special rule which gives +1 WS to Wolf Guard and TWC.

Kingsguard Stormforce (Formation)
This formation consists of Logan on his chariot, some terminators in a land raider and a Stormfang in support. Basically "please buy the new Logan and flyer models". The formation gets First Among Equals, Kingsguard and Sagaborn plus the terminators get Furious Charge and a charge range re-roll when they hop out of the land raider. In addition you can have the Stormfang arrive when you want. That's pretty good for the Stormfang as you can guarantee to get it after an enemy flyer has arrived to try and take it out before it targets you. 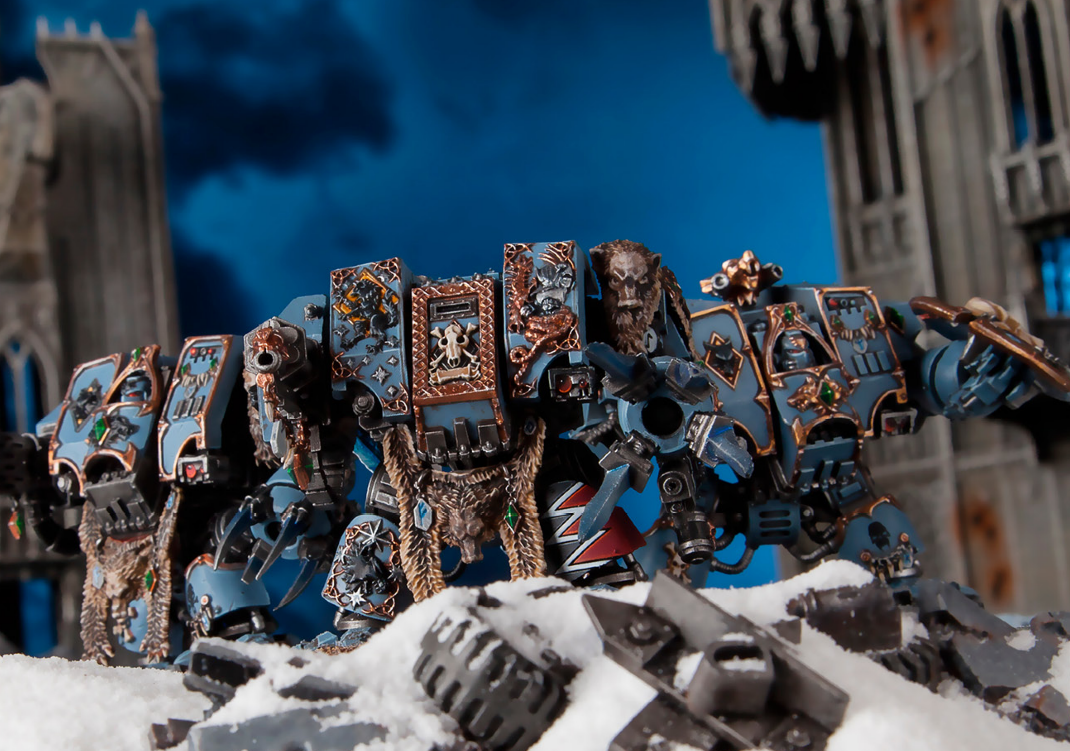 Brethren of the Fell-Handed (Formation)
Just Bjorn and two ven dreads (which I'd be putting in drop pods) which get Sagaborn and Adamantium Will. The other two dreads get a 5++ save if they're within 6" of Bjorn and all three of them re-roll to hit in combat. That's pretty effective but it does force you to bring all of them down in the same part of the battlefield or, if you're brave enough, walk them up the field together.

Wolf Guard Voidclaws (Formation)
As you might expect this is just five terminators with wolf claws. They get First Among Equals, Sagaborn and Kingsguard and allow you to re-roll reserve rolls. In addition you can re-roll when they deep strike on the first turn. This is actually half tempting as you get to drop them in turn one but I'm not confident they'd survive long against a lot of armies. Reserve roll manipulation is nearly always a good thing though.

Grimnar's War Council (Formation)
Superfriends unit of Ulrik, Njal, a rune priest and an iron priest (although they can be split up). Personally I'd split them as they could give 4 units Fearless that way. If you do keep them as a unit and throw Logan in too they get Zealot but I don't think it's worth the trade. What's great is that you get to re-roll for deploying first and add 2 to Seize with the Wise Counsel rule. That alone makes this formation worthwhile to me as it could easily be game changing. Njal may not be especially great but the other characters are worth taking if you stick the Iron Priest on a thunderwolf (as I mentioned in the Elites section review). 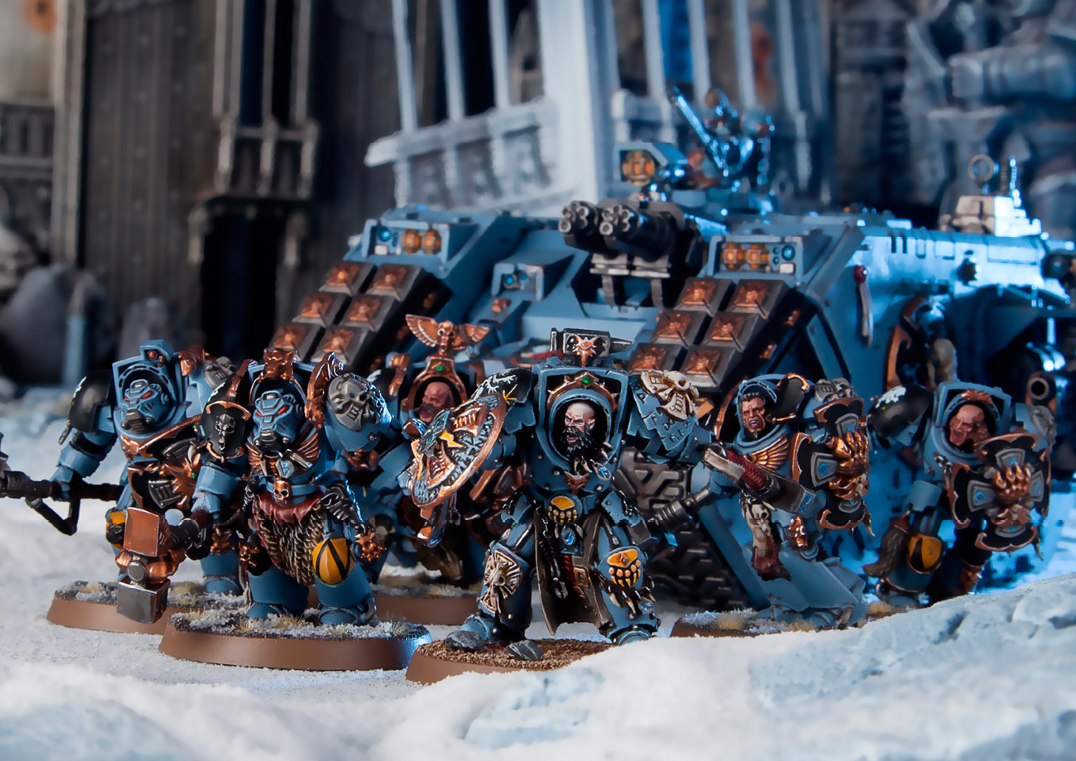 Arjac's Shield Brothers (Formation)
Arjac with some TH/SS terminators in a land raider crusader. They get First Among Equals, Kingsguard and Sagaborn plus Hammer of Wrath. In addition they get Fearless whilst Logan is alive and Zealot if he's killled. They also get Shieldwall which is the same as the Deathwing Knights rule but if you make close combat invulvnerable saves on 6s you inflict S8 AP2 hits in return. That could be awesome against some units but isn't especially reliable.

Wolf Guard Thunderstrike (Formation)
10 wolf guard in a pod plus some terminators. The formation gets twin-linked on the turn they deep strike but all arrive on the same turn (single reserves roll). Pretty good if you're throwing a lot of melta into the units but with the increase in costs it soon gets pricey.

The Champions of Fenris (Formation)
An interesting idea this. Basically a formation of formations with all of the special rules from the individual ones plus some extra rules. This is all centred around the War Council. If Logan is alive they get re-rolls to hit in combat, if the iron priest is alive vehicles get IWND, if Njal is alive they get Ad Will and if Ulrik is allive they get Preferred Enemy. That's a pretty impressive combination of special rules but since you have to take one of each of the above formations it's probably a bit too restrictive. I might give it a try at some point just for the novelty.

Conclusion
As with all of the formations and detachments I feel like GW is basically trying to persuade you to buy models you probably wouldn't have. I don't see why Logan's company should have bonuses to TWC except to encourage you to buy them. Some of the formations are better than others but generally speaking I'm not a fan of being so restricted in my army selection. I'm very tempted to try them out though as the bonuses they give are too good to pass up.
Posted by From The Fang at 17:00:00