This is certainly going to be a mammoth post as on the face of it there's a disgusting number of units competing for the slots. Having said that a few of them are effectively the same thing though so it isn't quite as tough a decision as it would appear. 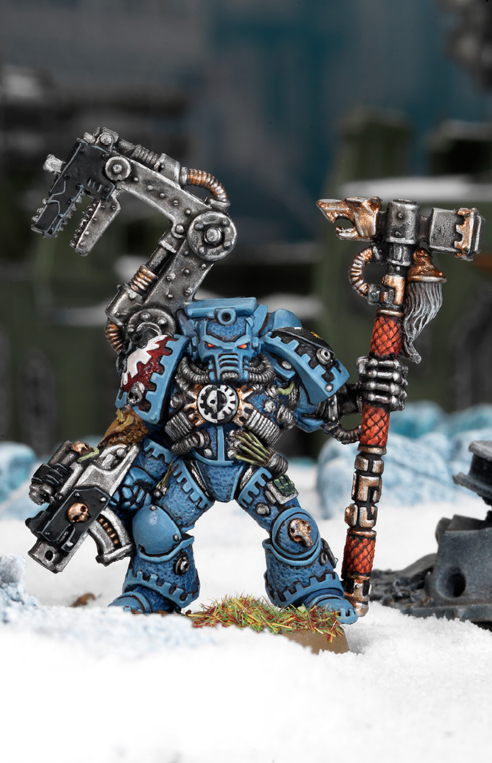 Curiously the Iron Priest became 10% more expensive than before and I'm not really sure why other than to make his cost more in line with a techmarine. You could think to yourself that he's a bit useless but when you factor in a thunderwolf mount I'm not so sure. That would give him 5 S10 AP1 attacks on the charge from his servo-arm (2 base, 1 for charging, 1 for TW and 1 for two specialist weapons). That's certainly not to be sniffed at. The mobility the thunderwolf would grant him would also allow him to run over and repair a vehicle should the need arise too.

You could also consider running him and some servitors in a flyer to keep it afloat. Seems a bit of an expensive option though. Servitors are a bit useless otherwise and need to be taken with a priest to avoid Mindlock.

Wolf Scouts
The new book is a bit of a mixed bag for Wolf Scouts. Their old rules used to allow them to arrive from reserve behind your opponent but that's gone now. It wasn't as good as it used to be anyway since they stopped assaults from reserve but it's a shame to see it go. What we're left with are essentially just WS/BS 4 versions of the scouts that appear in every other book (plus Acute Senses and Counter Attack of course) as they now have access to camo cloaks (yay!) and shotguns (meh). They're not particularly expensive but still more than Blood Claws and with 4+ armour.

I think basically the only time we'll see them is as sniper scouts with camo cloaks in the same role as you would in a marine list except without the benefit of being Troops. Of course that doesn't matter outside of Combined Arms but still. They also work out about 15 pts more expensive than SM scouts but they are superior. I think there are better ways to spend your points though. 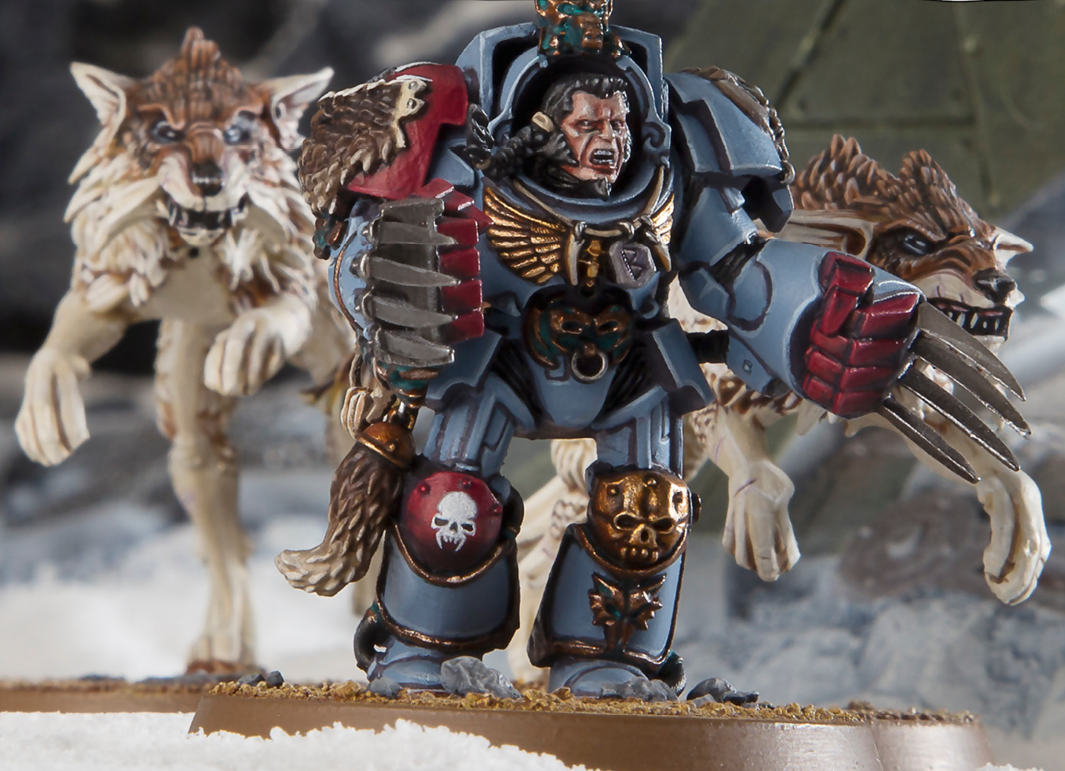 These were pretty ubiquitous in the old book. Despite the rumours they've retained Eternal Warrior and the basic model is still a bargain price. Beastslayer has been replaced with Monster Hunter which is perhaps a slight nerf but you no longer lose a kill point if he survives. The trade off is that a lone wolf is never scoring.

The big issue for a lot of people (myself included) is that you can no longer run them with a chainfist and stormshield (gutted that I spent so long making right handed shields). To be honest though you can just run him with a hammer and he's almost as good and 10pts cheaper for your trouble. I'd even be tempted to throw in some fenrisian wolves too.

The good news for lone wolves is that since you can now take drop pods in a Fast Attack (more on that in the next post) you can stick your lone wolf in one and not worry about spending all game trying to get him into the action. I really think a lone wolf is still an awesome choice and he won't struggle too much against most vehicles with a hammer instead of a chainfist. 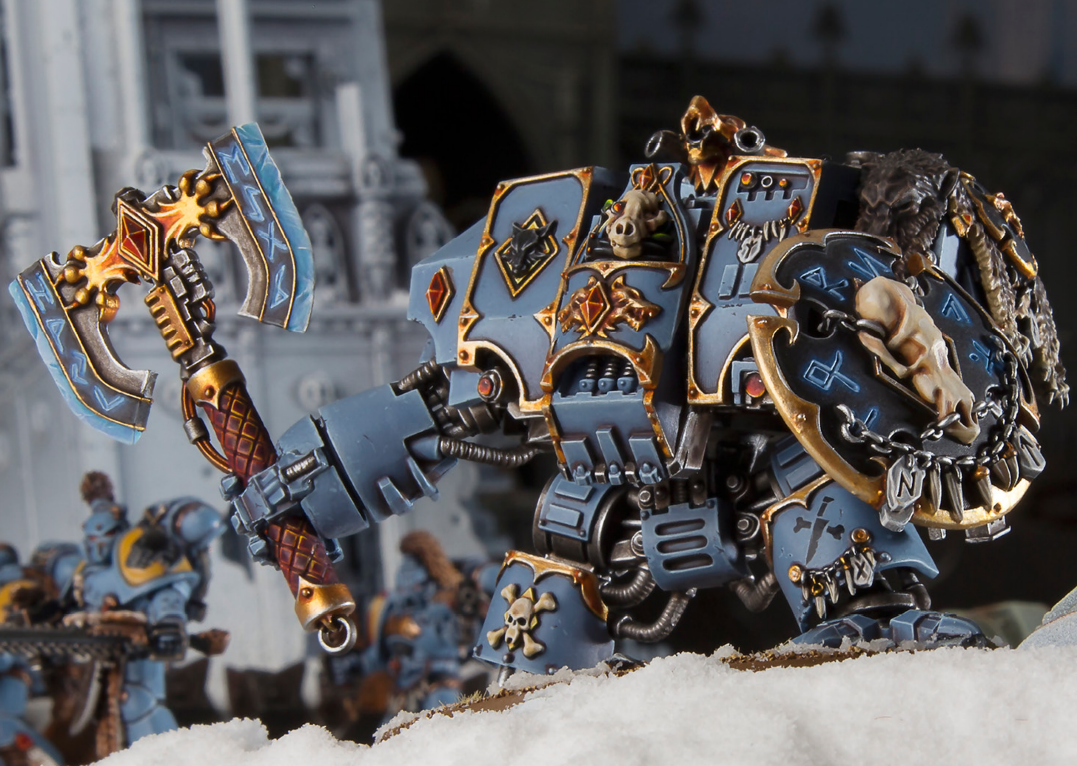 I think with the changes to vehicles in 7th edition we might see dreadnoughts more often as they're certainly more viable. Of course they can still be glanced to death but they're less likely to die to a single shot. The basic dread is 10pts cheaper and the venerable one is about 25% cheaper than before. It's great that you can now take a helfrost cannon too and some of the other weapons have become cheaper. It's very tempting to give the dread a great wolf claw which is basically 5pts for Shred. Extra armour is also cheaper and combined with Venerable makes for better resilience.

The axe and shield combo is an interesting one. The axe is just a master crafted power fist but having a 3++ save to front armour is huge especially in combat. It makes the dread pretty pricey though and it can still be taken down by hull point stripping like anything else. Not to mention I think it looks a bit daft and I'm not a fan of the wolf skull head option. 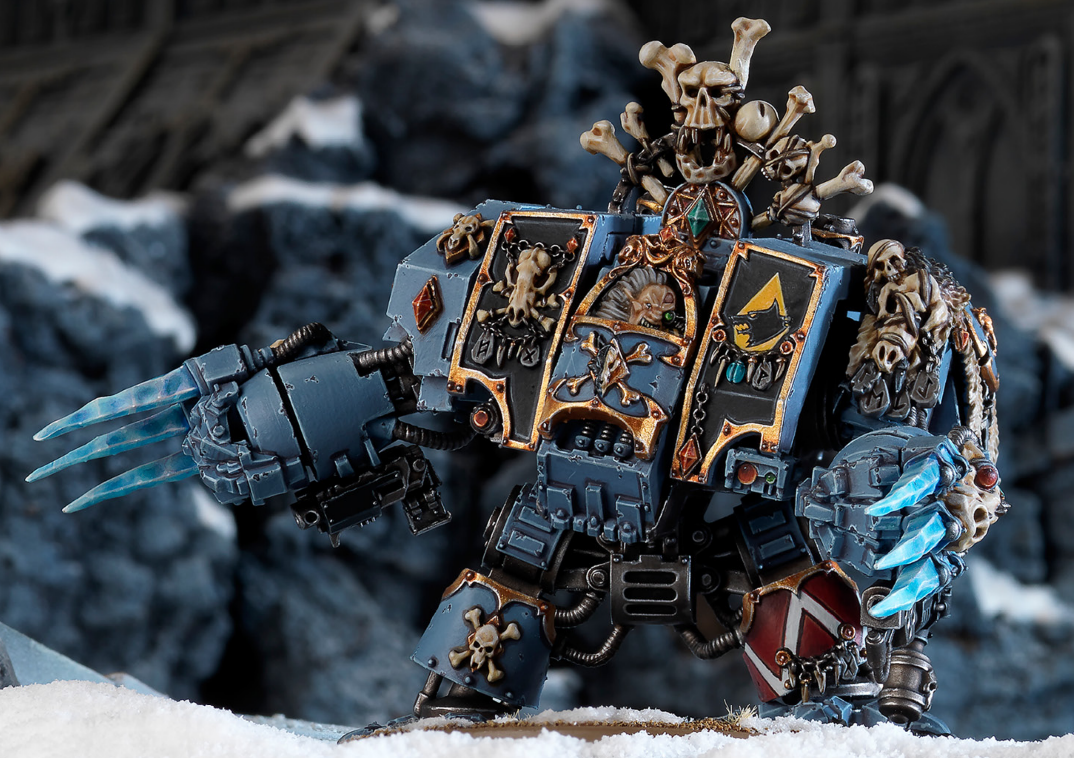 This guy might have a stupid name but he makes up for it with his rules. Put him in a pod, drop him into your opponents lines and watch them desperately try to down him before he can cause havoc. He get's IWND and an immunity to shaken/stunned which means a decent chance of him getting into the thick of it but you need to be careful where you drop him to protect him from melta etc. Should he get to charge he get's a disgusting number of attacks (potentailly 10) that strike at S8 on the charge with re-rolls to wound and a re-roll to hit. Very little can stand up to that and with character he can be challenging out power fists and things to make sure they die.

I'd find it very difficult not to include him in a list for the points although I would feel like I'd fallen victim to the classic GW move of make the rules awesome to sell a new model!

Wolf Guard
It's tricky to figure out why you'd take wolf guard now as you can't split them up to join units. They get an extra attack over Grey Hunters but lose a ranged weapon for the privilege. The whole unit can take pretty cheap jump packs or bikes though which makes them a very tempting prospect as an alternative to swiftclaws and skyclaws. Their combi-weapons became more expensive which I'm sure will frustrate a lot of people who used to run pods of them with melta alpha strike.

Generally speaking I think you're better off with hunters unless you want jump packs or bikes for them. 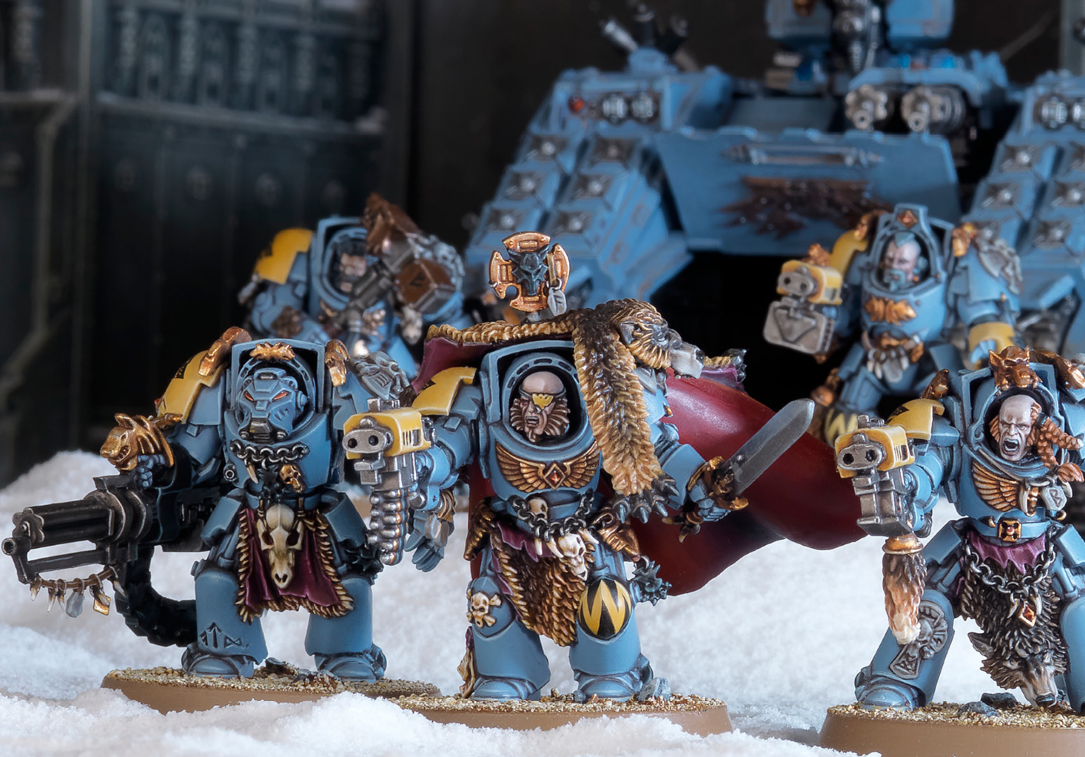 The big news is that WG terminators can once again deep strike. I'm sure you've not missed that in the rumours though so let's move on. Before I do though I'd like to remind people you could still take a drop pod in Fast and use it for the terminators if you so desired.

As we've already seen with wolf lords and lone wolves, some of the weapon combinations are no longer available but generally speaking the weaponry is cheaper. Their base cost is the same though which means you're getting a much better terminator for only slightly more than a regular SM one. It's nice that you can equip them with TH/SS for a much lower price now too. The assault cannon and cyclone missile launcher are cheaper also.

Terminators are awesome on paper but with the massed firepower some armies can bring to bear it often feels like that 2+ save isn't enough. You need a decent delivery mechanism such as a stormwolf or land raider but that bumps the cost up further. 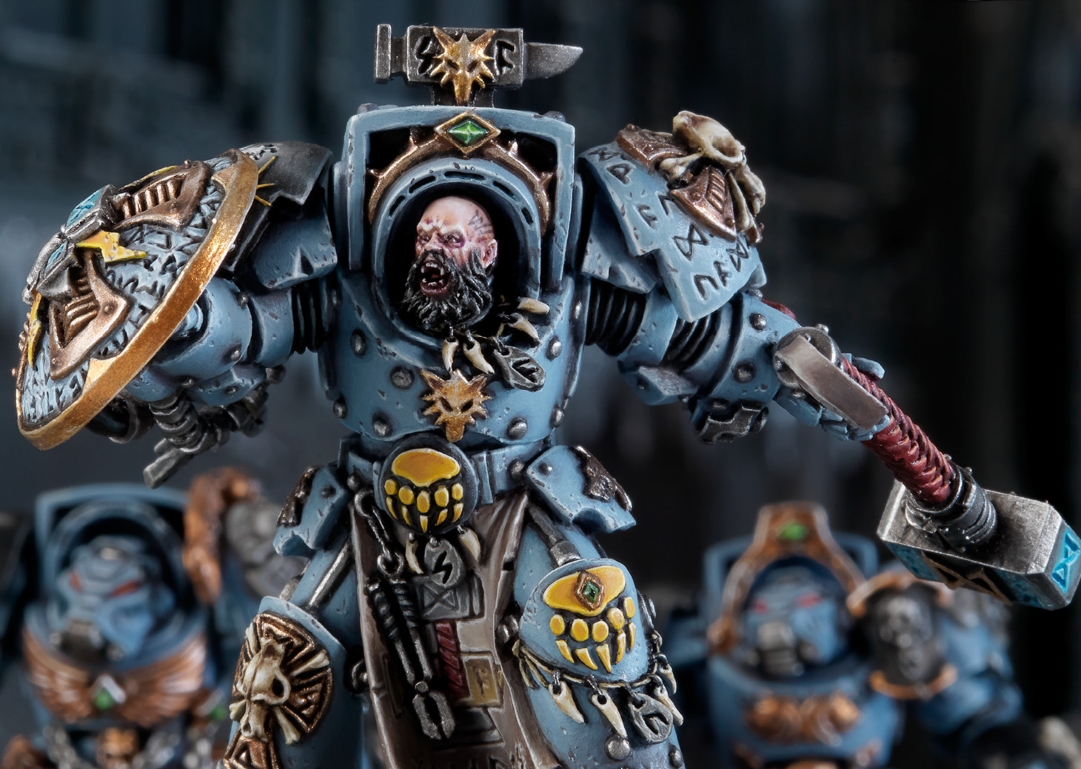 By far my favour special character in the old book and still a beast. Arjac used to be an upgrade for wolf guard which meant he could join grey hunters but you're now forced to run him with wolf guard. I know a lot of people are writing him off as they did in the old book as he only has two wounds but trust me he's still great (although not quite as great). He's taken a massive price reduction of around a third and retained his 2+/3++ with EW.

His re-roll to hit is now only in challenges which makes him a little less useful against single MCs but still awesome against other characters. His shield no longer gives him an extra attack but instead gives Hammer of Wrath which could potentially help him out. Foehammer can still be thrown 6" but has been downgraded to AP2. He may not be quite the man he was but he's still a fearsome prospect and especially with the reduced costs.

Conclusion
Well that's one hell of an Elites selection. There's probably only the wolf scouts that I wouldn't want to take most of the time. The idea of running three dreadnoughts is hugely tempting and I'd even consider Bjorn as a fourth. Dropping him and Murderfang in turn one would be pretty terrifying especially when followed by another couple of pods in later turns. I'm already thinking I need some more drop pods!

It's a shame I can't run Arjac with grey hunters now but it won't stop me including him in the vast majority of my lists. The Iron Priest is actually tempting me now too. Damn you GW.

Next up, Fast Attack which is again pretty bulky!
Posted by From The Fang at 17:00:00