After Action Thoughts on the New 7th Edition Ork Codex

Apologies for not posting more this week. I've been using what little free time I have to paint up my new Morkanaut which still isn't finished. However, with the new Space Wolves codex arriving tomorrow I thought I'd take this opportunity to wrap up my Orks stuff with some thoughts about the new book having played some games with and against it. Hopefully after SW I'll get a bit of a breather between codex releases to spend some more time talking about 7th edition in general. Anyway, onto the Orks, I'll do this unit by unit, obviously I haven't used everything yet. I'll try and keep things brief and limit this to specific experience. If I don't talk about it I haven't used it.

Warboss
I've been running him with mega armour and Lucky Stikk. This makes him pretty invincible to anything but AP1/AP2. Great to have at the front of a boyz mob but bear in mind he's slow and purposeful so they won't be using the Waaagh! to full extent. With a klaw he's a beast in combat especially against anything without a power fist! Nothing new really compared to the old book I suppose but the Stikk makes him pretty awesome. The Kap could be great for a regular warboss but if you're giving him mega armour the Stikk is just too tempting for me.

Weirdboy
I've found the weirdboy a little frustrating really. Against psychic armies he just gets shut down to easily. I think I've been unlucky not to get the powers I needed most of the time but sadly I think the weirdboy is overshadowed by other HQs. He just isn't effective enough. That won't stop me using him for fun games but competitively he's probably not going to feature in my lists.

Big Mek
Still a regular in my lists. I've been having great fun with a Shokk Attack Gun in a squad of lootas but you're relying on popping transports with the rest of your shooting which isn't easy these days and especially not with Ork shooting. The KFF is still great. Of course it isn't as effective in some ways but now that it's a 5++ save you can use it to make your meganobz into two-wound terminators. I haven't had the opportunity to repair much stuff yet but that was rare before as well. Still a great unit and likely to feature in nearly all of my lists.

Painboy
Seems to have missed out versus a warboss and big meks but he's doing what he always did. Only difference now is you have to sacrifice and HQ but this does mean you can add him to meganobz to make them disgustingly difficult to take down. 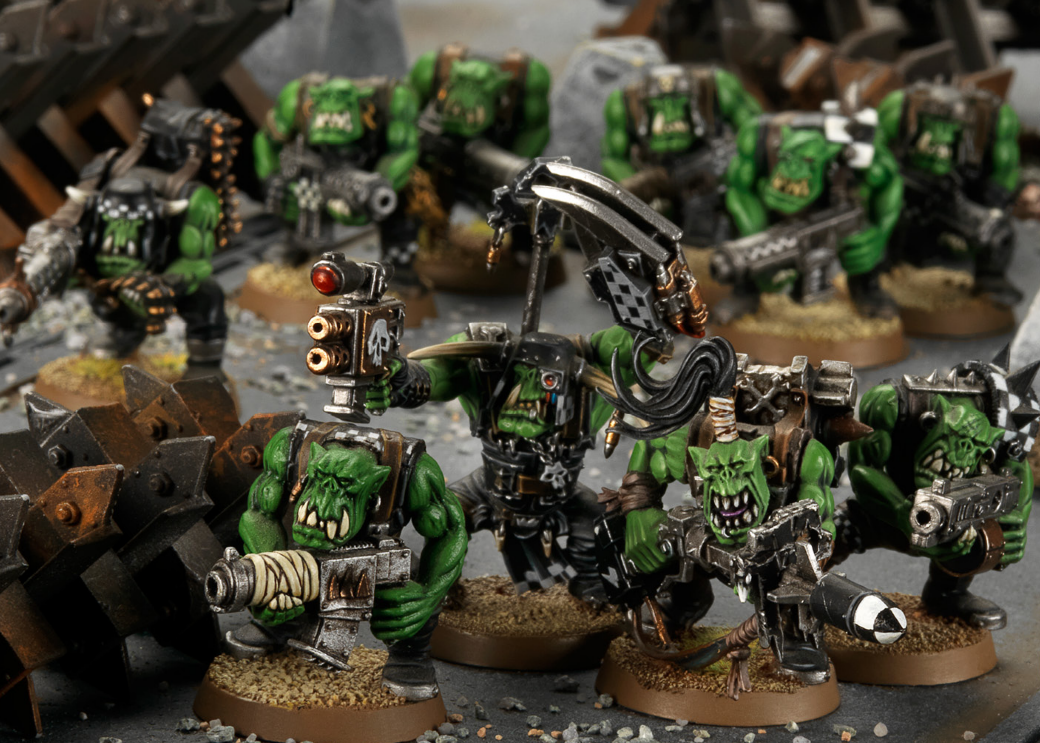 Pretty much the same as they ever were. I think in the current climate you're best taking them in trukks as I think Mob Rule benefits smaller units more than larger ones now. Obviously having 10+ models is still useful. Incidentally I haven't found Mob Rule to be as bad as the nay-sayers thought. It's basically Fearless most of the time but with the odd Ork being sacrificed for the cause. Of course in the old book 11+ mobs were properly Fearless but the new Mob Rule actually works just as well for small mobs. No-one likes killing their own models but being able to pass Pinning or Morale Checks at the right time can be awesome and worth the cost. You just have to accept Mob Rule has changed and move on. Essentially 50% of the time you're Fearless now even with just a handful of boyz. Mobs of 10+ help but mobility is always an issue and there's a lot of shooting to survive these days.

Trukks are just as flimsy as ever and with the changes to ramshackle they go up with a bang more often. Being open topped makes it possible to get an Explodes result with even AP- weapons and explosions hurt with S4 to occupants and surrounding models. Still, if they survive you're still gaining a huge boost in effective range and having those free rokkits can be great.

Burna Boyz
The only time I've used them was in a Morkanaut (more on that in a bit) but I think they could be pretty effective in the right situation. Still don't think I'd take them over other units though.

Tankbustas
The only game I used them they ended up running from the board before firing a shot but I intend to put them in more lists as Orks need a decent source of ranged anti-tank. 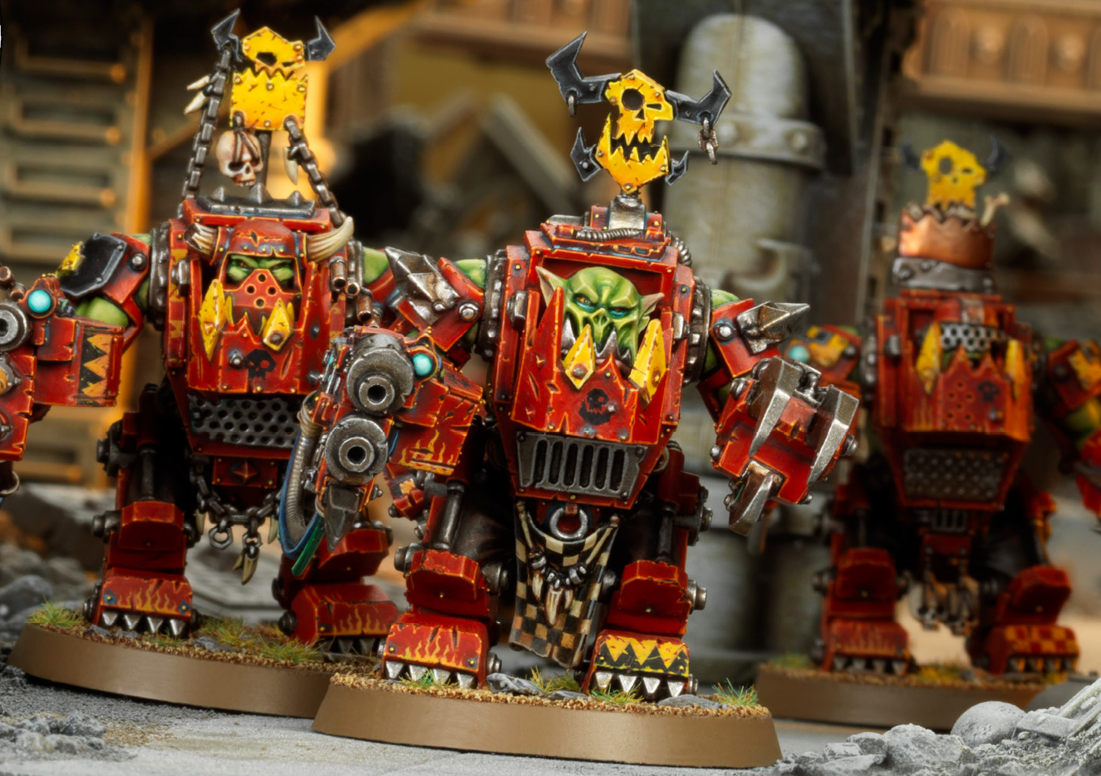 Nobz & Megnobz
Plain nobz are overshadowed by meganobz in my opinion. They can still be pretty effective but they die too easily before they get to strike so they're limited in effectiveness. Meganobz on the otherhand seem excellent to me. Obviously they aren't hugely different but being able to stick a Painboy and Big Mek in a squad for 2+/5++ and 5+ FNP feels pretty disgusting. Expensive mind you. I ran a large mob of meganobz in a wagon but I reckon you're best running two smaller squads and I'd even consider putting them in trukks to keep costs down.

Deffkoptas
Love them. They feel like a bargain for 30pts and with Jink they can stand up to a decent amount of fire. I've been running two squads of 3 koptas with rokkits. Reasonable anti-air, able to get side/rear armour easily on normal vehicles and great for charging in to harass opponents if necessary. Let's not forget late game contesting/controlling too. Your opponent has to do something about them and all the while the rest of your army is advancing unscathed.

Dakkajet
With the changes to both Waaagh! Plane and pretty hefty price tag I'm struggling to find a use for them. They feel like too many points off the table and don't do enough when they come in.

Blitza Bommer
The couple of times I've used them they've been excellent. They're pretty useless once they've dropped their two bombs but attract a lot of attention and can be devastating if things go according to plan. Any AP2 weaponry is a bonus and having S7 Armourbane is excellent too. Don't expect them to survive long but have fun zooming around for a couple of turns if you're lucky.

Warbikers/Nob Bikers
The only time I've used bikers they were again forced to flee pretty early on so I didn't get to try them out properly. Still, they're nothing special but they're more models getting into your opponents face early and forcing him to act. Going to look at using some Nob Bikers soon as I think they'll still be great.

Battlewagon
Undeniably pricey and slower than a trukk but AV14 and 4 HP is pretty tough to shift without AP1 weapons. That means your cargo is likely to get delivered safely. Run them as cheap as possible though. 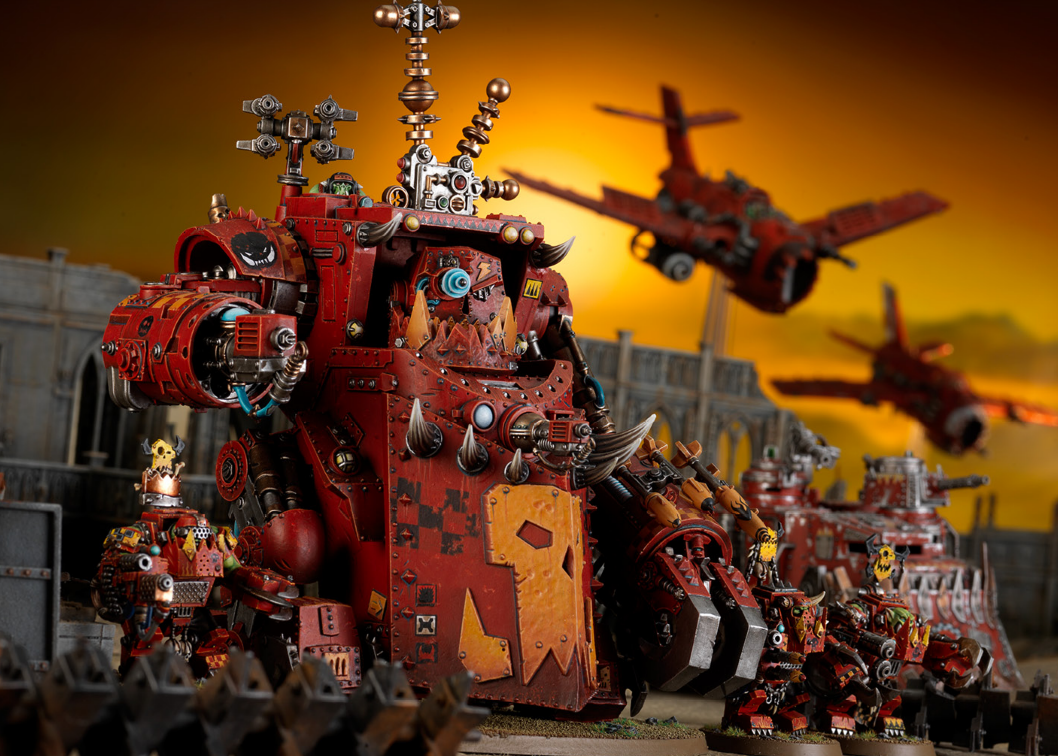 I ran it with the Mek/Burnas inside but to be honest my opponent barely targeted it as he felt like it was wasted shots since it wasn't doing a lot and could repair easily. It's a lot of points to sink into something so slow but having that KFF range is nice. I was pretty unlucky with it in my games with the blast scattering every time and taking a multi-melta from a stormraven which exploded it. Obviously it's vulnerable to being one shotted by a melta but so is every non-superheavy vehicle. My main issue is the lack of assault vehicle but I still think there's potential for it. Not so sure about the Gorkanaut though. I love the model so I'm determined to use it more but perhaps I'm being daft.

Lootas
Nothing has really changed I suppose but I still like lootas. They're a good option for anti-air most of the time and giving a mechanism for destroying vehicles. Again, I can think of better ways to spend the points but putting a SAG big mek in with them is fun at least.

Ghazghkull
Not the man (well, Ork) that he was but having him and another Warboss in a list is a hell of a dual threat. Making meganobz run could be great too. Still, he's a lot of points so he wouldn't be my first choice.

General Thoughts
Orks will always suffer in this world of shooting as they have an over reliance on combat. It's a lot easier to get plenty of anti-tank weaponry into your lists but with poor BS you just can't rely on it. There were several occasions where I set myself up to charge the occupants of a vehicle but failed to destroy it. Your boyz are as vulnerable to fire as ever. I tried out 'ard boyz for a game or two but found that I was sinking too many points into them.

When you play against Orks there's still that feeling of inevitability about it all. You're going to get charged by all these boyz at some point but you need to thin them out as best you can first.

I've been using the Ork Horde detachment nearly all the time as having 3 HQs is very handy. The formations in Ghaz's book look tempting at first but I'm frankly not prepared to shell out the money for the models needed to use them and I suspect a lot of tournaments will restrict formation use anyway.

This post sounds a bit down on the Ork book but actually I've had a lot of fun using them again. They'll never be a top tier army that can compete with some of the stuff around at the moment but I don't mind really. They're still one of the most enjoyable armies to use and they're powerful enough to give you a good shot against most lists. I'm finding it fun to write lists at the moment as I think there's a lot of depth to the book and there are some combinations hidden in there that can be excellent.