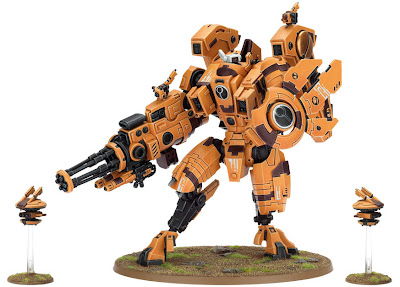 Following on from Monday's post about the new Tau flyers here's another about the most talked about model of the new release, the XV104 Riptide. Before I talk about how it plays, let me say that it's easily one of the best GW models I've ever put together. If you stick to the pinned pose then it goes together incredibly quickly. Even when pinned there's still some pose variety possible as the torso can swivel and the arms are able to flex at the elbow and move freely at the shoulder. In my case I built it onto a scenic base (some slate from the garden) and posed it using free movement on all the joints. It's a stunning model. Slightly smaller than I'd hoped but still an imposing sight on the battlefield. I'll post up some shots of it when he's finished (don't hold your breath!).

Anyway, onto how he performs in the game. The internet has been built up into a frenzy with people talking about how they're going to be an automatic choice and how 3 of them will be in every Tau list. Personally I don't see it. Don't get me wrong they're far from a bad choice but let's look at them in more detail to see why I don't think they're as hot as some seem to think. Let's start then by talking about the best build for them.

Loadouts
There's no denying that they're an expensive unit. Starting at 180pts and costing anywhere up to 290pts when fully equipped. The basic Riptide is already incredibly durable with T6, 5 wounds and a 2++ save. Add to that the JSJ move than Tau are synomymous with and he's pretty tricky to deal with. There'd certainly be nothing wrong with running him in his vanilla form.

However, the first thing I'd do is swap out the heavy burst cannon for the ion accelerator. The burst cannon isn't bad but even when "nova'd" it's only putting out 12 rending shots that, without markerlights, only equate to 6 hits on average. Factor in the risk of failure to nova (and losing a wound) and that is far from worth 180pts. The ion accelerator is far better for the simple reason that most of the time there's no point using Nova on it. By Overcharging the weapon becomes S8 large blast. Nova makes it S9 ordnance. Great for taking on vehicles of course but both types of shot are AP2 so if you're firing at ground targets why risk the Nova? This means most of the time you aren't risking losing a wound at all. Get's Hot really shouldn't be an issue with a 1 in 6 chance followed by a 2+ save.

The missile drones are expensive but 50pts for a more durable riptide isn't bad in my opinion. They add two 4++ saves and at T6 they're not hampering the suit itself. They're not just hovering round like conventional shield drones either with a missile pod each. The secondary weapon is probably best as a fusion blaster. In an army that used to have no issues with AV14, you now find melta to be important once again. Given that it's free, has 18" range (9" for melta) and twin-linked it helps the Riptide in it's role of armour suppression. The SMS isn't good enough despite having longer range and not requiring line of sight. The plasma rifle is similarly a waste of time.

The next question then is which two support systems to go with. Straight away we can rule out the target lock, advanced targeting system and positional relay, none of which are any real use given the weaponry and role of the suit. Overwatch isn't worth it with so few shots and odds are you'll have some supporting fire should it come to it so ditch the counterfire defence system. If you're taking a pair of drones then I think the drone controller is worth it. Essentially you're paying 4pts per drone to give them an extra hit between them with their missiles. Interceptor is cheap but you're just stopping yourself firing in your own turn. That being said a cheeky AP2 large blast on a recently deployed drop pod unit is a nice thought. That leaves the Velocity Tracker and Stimulant Injector. For me 35pts is a lot to spend on FNP even if you're pretty much getting it on every shot. If you aren't fielding drones then with the points you save, go for it but realistically there are better things to spend the points on.  Therefore for me, this is the ideal build if points aren't much of an issue:

Pretty fecking expensive right? If you take the Ion Accelerator with Interceptor & Skyfire and no drones then it's 210pts but they're still spendy.

It's worth mentioning at this point that there's some debate about whether the drone controller can grant the missile drones BS3 when they shoot flyers. Personally I think it's unlikely to be FAQ'd that way (if FAQ'd at all) as the shooting at flyers rule goes "can only fire Snap Shots unless it has the Skyfire special rule" or words to that effect. Since the drones don't have Skyfire they'd be BS3 but reduced to BS1 when they fire at the flyer. Interesting question though.

Before going on to whether I think they're worth it I need to cover the Nova reactor so here's my take.

Use of the Nova Reactor
There's 4 options for its use which are: 3++ save, 4D6 thrust (snigger), double support shot, Nova-charge main gun. Most people will go for the nova-charged gun I think. As I've said though S8 to S9 isn't worth the risk unless tank hunting. The other "powers" are situational but, in my opinion, better.

If you know you're going to take a lot of AP1/AP2 fire then 3++ saves are good. Moved too close to a land raider and melta'd it to death? Jump back 4D6 to prevent revenge charges. Skyfiring at something other than a stormraven/talon then go for the Ripple Fire and melta the f**ker.

Now you aren't going to even attempt to use the reactor if you're down to a couple of wounds but the rest of the time I'd advise risking it as much as possible. If not then you're just not getting your points-worth.

Conclusion
Undoubtedly the main strength of the Riptide is its durability. Couple that with the fact that it's a big target that people are going to want to bring down and it actually provides a good sponge for enemy fire. It's far from indestructible though and a huge chunk of points to lose. Dreadknights may be dwarfed by it but they'll piss on it in combat. Even units that won't necessarily kill it instantly will tie it up in combat pretty easily. With a Boost or even a standard thrust move it should be hard to charge it but not impossible.

The problem is that despite hanging around a long time it won't really be doing much whilst it is. Against MCs neither gun is particularly effective. Against infantry your opponent will likely spread out enough to minimise effects. Essentially you have to hope you're playing mech then the Riptide and have some fun. Otherwise it's just never going to make itself worth the points even when you factor in the distraction effect.

I'm still going to be throwing one into my lists for fun but competitively there are far better options in the codex I reckon. My opinion might change on these guys because it's still early days and we haven't seen all of the combinations yet (or even come close). For the moment though they're just too pricey and not effective enough.

Feel free to disagree with me here. Is there something I'm missing about them? Are you going to run 3 of them? Try and convince me.
Posted by From The Fang at 17:00:00