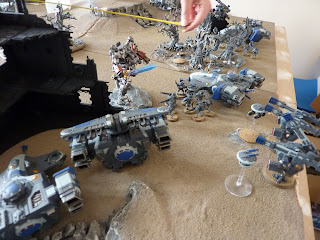 As you may have gathered by now I'm obscenely excited by the release of the new codex. I've already posted my first impressions but over the last week I've played 4 games at 1,850 with them. The first three games were used to try out as many different units from the new codex as possible whilst the fourth game saw me use, what I think is a really competitive list and table Matt's competitive CSM/Daemons force. Here's my experience of the different units so far. I'll be covering each in more detail as part of my Unit Reviews series but these are some after action thoughts.

HQ
Farsight - the main reason to take him is the "bomb" of suits he can accurately drop in. Frankly once he's done that he's a waste of points though. He doesn't have Iridium armour (probably because he's an outcast) but this means for me a normal Commander is better. Besides some of the Warlord Traits are just as good as the no scatter one.
Shadowsun - a better option than Farsight I reckon. She gives her unit Stealth and Shrouded and with her twin-fusion blasters and advanced targeting system she's a threat to enemy chars. Once again she's competing with Ethereals and Commanders, both of which can be excellent.
Aun'va/Aun'shi - not had chance to try them yet
Darkstrider - BS5 markerlight is great but better in a fire warrior unit than pathfinders as his -1T rule is wasted when using markerlights. Could be used to devastating effect with Outflank.
Ethereal - weak if not hidden in a unit but Ld bubble is handy. You're pretty much always going to use the extra shot on pulse weapons as it's brilliant for both shooting phase and Overwatch. Question is whether powers can be used from within a devilfish though. Nothing saying it doesn't unless they FAQ it.
Cadre Fireblade - good for ranged shooting with Fire Warriors and has BS5 markerlight but Ethereal gives wider effects. Combination of both could be devastating though.
Commanders - could spend ages working out all the combinations but with some of the Warlord Traits him and his unit can be excellent. Bodyguard aren't really worth 10pts extra despite auto-LoS.

Troops
Fire Warriors - same as ever but Supporting Fire with Ethereal can be great with good unit positioning. Big squads are the order of the day.
Kroot - cheap outflanking scoring units are great but don't expect them to survive long

Elites
Crisis Teams - team them up with a commander and there are some seriously nasty combinations. Not having to pay for multi-trackers allows more twin-linkage.
Stealth Teams - when they're trying to compete with Crisis there's no contest and 30pts is far too much for single wound models. Sadly they don't do anything the rest of your army can't do.
XV104 Riptide - as I've discussed in my post they're fun but expensive. We'll see them in competitive play for a while but I think people will realise they aren't the dog's dangly bits as they first thought. Certainly nice to have one in friendly games though.

Fast Attack
Pathfinders - love them even more than I did before. No compulsory devilfish means they're much more appealing. Only drone I find useful is the grav one though. Keep them cheap because they'll be priority targets.
Vespid - not tried them but struggle to see a place for them. If they'd been given two shot guns then maybe.
Drone Squads - could add 4 BS2 markers for 56pts but pathfinders are cheaper. Not much point taking them since they can't score/deny.
Piranhas - cheaper than they were but with BS3 they need markers to make a mess of AV14. 100pts to kill a land raider is good.
Sunshark bomber - killed a full unit of cultists with the bomb but most other targets would shrug it off. Drones are great as they give you the ability to fire at different targets with Skyfire.
Razorshark fighter - lacks punch vs AV12 and I think the bomber is more flexible

Heavy Support
Broadsides - I do miss S10 but S8 AP1 vs flyers is good. Nasty even with a single markerlight. Should've done a lot better in my games but I kept rolling 1s on damage table.
Hammerhead - only tried it with Longstrike but he's a beast. More on him soon but without him it still suffers from the same issues and has to compete with Broasides.
Sky Ray - great for hitting flyers with markerlights to boost your broadsides but has to stay still to be effective with missiles meaning it needs cover or else is vulnerable with a lack of Jink.
Sniper Drones - didn't try them but can't see them finding a place in a strong FOC slot

Conclusion
I was worried that I'd find using the new Tau army a little boring as it's essentially roll dice until things die. However, the combination of Ethereal, Supporting Fire and Markerlights takes some skill to get right. Planning your shooting phase can be difficult. Spent most of the games with a grin on my face as I picked up handfuls of dice. 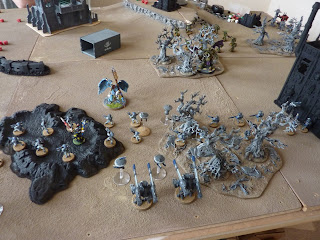 I was mostly playing against AV12 flyers and flying monstrous creatures so given how well the broadsides faired against them they're going to be brutal against AV10/11. Matt only crashed one of his MCs despite one taking 7-8 tests. Had they fallen they'd have certainly been gunned down by massed pulse fire. Old Tau games were very much a see-saw effect where you felt you were doing well early on as your broadsides gunned down vehicles. Later in the game the assaults were crippling though and the game was often lost as soon as your opponent reached your lines.

I have to say I love the way they've sorted Tau in assaults. They should never have become assault masters but needed some kind of protection. The free photon grenades for pathfinders and fire warriors, devastating Supporting Fire volleys and drone shenanigans make them pretty slippery. This can often lure an opponent into the open to try to charge only to find himself out of range and gunned down next turn. Matt regularly had MCs on a single wound and was scared to charge fire warriors for fear of Overwatch. That's a great feeling as a Tau player.

It's a bit sad that the new units (flyer/riptide) aren't better but they're far from awful. The HQ slot is probably the most difficult one to decide. Pretty much everything in there could be good. I'd love to take an Ethereal and Fireblade but a Commander is just too tempting. Next battle I have (probably against Jamie) will be given a detailed battle report.
Posted by From The Fang at 17:00:00