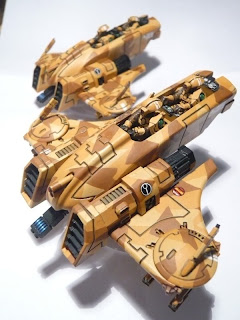 I've already talked about the new flyers and the revamped Pathfinders. Therefore I've got three more units to cover to complete my review of the Fast Attack section. This is a pretty bloated section of the book but most people will be looking at Pathfinders over the rest I reckon. Anyway, here's my thoughts on the comparative underdogs of the Fast Attack slot.

Vespid Stingwings
I don't think I've ever seen these models in the flesh as no-one ever takes them and I never bought any. If these guys were Troops then I think we'd see them more thanks to their mobility and AP3 weapons but as a Fast Attack choice they'll nearly always lose out. At 18pts a piece they stand out as being expensive in this book. For that you get a fairly decent statline though. They may be BS/WS 3 but with T4 and I6 they aren't totally useless. They're almost a combat unit with Fleet and Hit & Run but with only a single attack each I wouldn't get too excited. The normal Vespid are Ld 6 which means a Strain Leader is a must. With Stealth (Ruins) they could be difficult to shift and likely to get ignored anyway. S5 AP3 shots aren't bad for killing off small marine teams but I think you're paying too much for the privilege and hoping those marines aren't in cover.

I can't help but think that if they'd just made their guns Assault 2 or given them some sort of CC weapon they might've been useful. As it is they're a strange combination. I6 makes you think assault but they've got a single S3 attack (plus HoW). Their jump packs given them mobility but then they get Stealth meaning they want to stay in cover. They get Move Through Cover to let them land in ruins without dangerous terrain at least. They don't really excel at anything though which is why I'm unlikely to pick any up even if I did like the models - which I don't.

Drone Squadrons
Essentially these can be thought of as either a Fire Warrior or Pathfinder unit that trades BS for mobility/survivability and increased cost. Gun drones put out the same amount of fire as the same number of Fire Warriors but are 5pts more. Assuming no marker support, 12 gun drones get around 13 hits which is one more than 12 carbine Fire Warriors. Even with marker support they still only score one extra hit compared to the foot sloggers but have an effective 24" range for two shots each. They're T4 and Jet Pack based though so they're more likely to stay alive and can reposition more easily.

The marker variants will put out a lot less marker hits than the same number of pathfinders and will be 30pts more. Being able to Jump-Shoot-Jump is great for markerlights though and means they have greater range and they're more likely to be around in the later turns. They also have T4 and 4+ to the Pathfinders T3 and 5+.

Tacking on a commander with drone controller could be great but will make either unit very expensive. Ultimately it's a play style consideration again. Drones are probably more likely to be overlooked by opponents though. More on drones in a different post (I keep saying that!).

Piranhas
This is probably the most underestimated unit in the book I reckon. In the previous codex they were mainly used as blocking units to shield your army from assaults. There's still a place for them in that roll especially in a large unit. The big deal about Piranhas is how much of a bargain they are now. In the old book a Piranha would set you back 60pts. They're gone down by a third which is a huge amount. Not only that but with carbines being two shots and burst cannons four they've got an extra 3 shots over the old version.

Running them totally vanilla is a possibility. For the same price as the bomber you can have 4 Piranhas with burst cannons. That's 32 shots at effectively BS3 (drones are T-L BS2) meaning about 17 S5 hits. Not bad at an effective 24 inch range. They're certainly a good harassment unit which is what I used them for in the past.

The other option is taking them with fusion blasters. If you're using them in this roll then I'd recommend ditching the drones pretty early on and having them irritate your opponent whilst the skimmers go tank hunting. With the loss of the S10 Broadsides Tau actually find themselves struggling with AV13+. Piranhas provide a great solution with effectively 21" melta guns. Sadly you can no longer give vehicles +1BS so you'll probably need marker hits.

With the exception of perhaps Sensor Spines and maybe Flechette Dischargers/Point Defence (if you're running them as blockers) I wouldn't spend too many points on the piranhas. Their appeal is their low cost so spending too much on upgrades defeats the point. It's a real shame vehicles can't contest any more....

Conclusion
Drone squadrons are interesting and, in another book, Vespid might be useful but of the three underdogs I think it's Piranhas who are the surprise package. They put out a similar number of hits compared to the same points-worth of Fire Warriors and are a lot more manoeuvrable. They're not too difficult to take down but with everything else in your army posing a similar threat they might be ignored.

Nearly there folks. The final post in this series will be on the Crisis and Stealth suits. After that I'm going to do some specific articles about commanders, drones, crisis loadouts and close combat. At this rate I'll be done in time for the Eldar codex....
Posted by From The Fang at 17:00:00