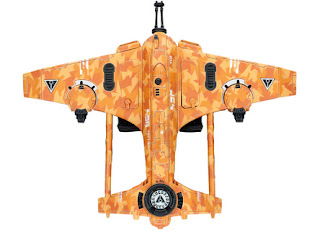 This will be the first in a series of posts looking at the units in the new Tau codex. I'm starting off with a double talking about both of the flyers. The reason being that I've had three games with the new codex today against various opponents and it's made me think about what the two different Tau flyer variants have to offer. Now I'm sure, like me, at first glance the fighter seems like the obvious choice right? Well I'm leaning toward the bomber actually so maybe I can convince you as well.

First off, the two flyers are both 11/10/10 in terms of armour and are both BS3. These facts alone mean that neither of them are particularly brilliant when compared to some of the other flyers out there but nethertheless they're our only choice if we want a flyer but don't want allies. Remember some armies will still struggle even if they have a quad gun. Against other flyers though, these two are pretty screwed. Even so, I think they can be useful. In terms of Vehicle Battle Systems, there's only really one worth taking which is the Decoy Launchers. This can prevent those pesky quad guns from destroying them before they even get to shoot. For 3 pts I think it's pretty much compulsory with the number of aegis lines around. Everything else is either too expensive or useless for a flyer.

Now let's look at the two flyers in isolation and what you get for your points.

Razorshark Strike Fighter
Stock equipment is a quad ion cannon, two seeker missiles and a burst cannon. You don't need me to tell you that a missile pod for 5pts should be automatic. There's no point having S5 on a flyer if you can swap it for S7. Anyway, that brings us up to 153pts with the decoy launchers. You've then got two S7 shots from the missile pod and 4 S7 shots from the quad cannon to take down enemy flyers. That's 3 hits on average meaning probably only a single penetrating hit. Combined with a seeker missile hit (assuming you fire both off) and you might kill the enemy flyer but will struggle in subsequent turns.

Against ground targets the missile pod and quad cannon could combine beautifully to kill off tightly packed tanks or infantry. Even so it's hardly devastating.

Sun Shark Bomber
Again you pretty much want to always take the twin-linked missile pod upgrade meaning with the decoy launchers you're paying 168pts i.e. 15pts more than the fighter. The seeker missiles are still here but this time we're getting a pulse bomb generator and two interceptor drones. The pulse bomb is one of those things that could be brilliant but will most likely be ineffective. On some occasions you're going to roll a 1 early in the game and not get to fire it much, if at all. However, when you do fire it you might get a couple of cheeky kills against a different target to the rest of the bomber's shooting.

The twin-linked pod should almost guarantee you at least one hit and with the addition of a networked marker light you can fire a missile at BS5 or even fire the pod at BS4 and be quite likely of getting two S7 hits. Granted you've got to get lucky with the marker hit but essentially you're only losing out on 1 S7 hit compared to the fighter.

You then have to factor in the drones. These guys can be deployed whenever you feel like it during the flyers move without penalty and get a twin-linked ion rifle each. That's two S7 shots with pretty slightly better than BS3. Essentially it's about the same as the quad ion cannon. However, unlike the ion cannon it can be fire at a different target to the flyer. This means if you got lucky with your bomber's missiles then you could still fire the drones at something else. They can overcharge them for S8 small blasts which again make decent vehicle hunters (and counteract the poor BS somewhat) but also have the Interceptor rule. This means you could drop them off, turbo-boost them to your opponents board edge then have a pop at something as it comes onto the board, maybe even an enemy flyer.

The key thing for me is that whilst the bomber itself isn't particularly difficult to take down, the drones can easily be hidden somewhere or might even get overlooked completely. This essentially gives the unit a lot more longevity.

Conclusion
Let's get something straight, the main thing here is that neither flyer is great. They're better than some but AV10 most of the time and mostly S7 shooting isn't great. They have the potential to take down enemy flyers but broadsides do it better for the most part. That being said, I still think there's a place for them in your lists. They distract enemy flyers from ground targets and if your opponent doesn't have much anti-air then they could be terrorising vehicles and infantry alike.

If you are going to take a Tau flyer I strongly urge you to actually sit and look at the bomber vs the fighter. To put it simply the drones provide the same as the quad gun so for your 15pts extra you're getting a markerlight, twin-linkage on the pod and the bomb generator. Not to mention the aforementioned shooting at two targets.

What do you reckon? Have I sold it to you or are you still favouring the fighter? Please feel free to let me know your thoughts on them in the comments section. Next up is the Riptide and why I don't think it's as exciting as everyone else seems to think!
Posted by From The Fang at 17:00:00