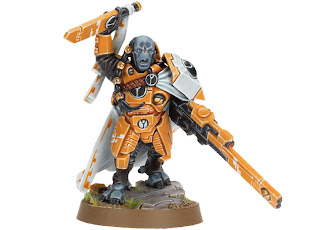 On Saturday I talked about the special character HQ options and for the most part my opinion was that they don't offer enough over their standard version to make them worthwhile in competitive play. So what makes the standard options so great?

Cadre Fireblade
With an identical statline to Darkstrider but a better armour save, the cadre fireblades are already pretty good for their measly 60pt price tag. You still get a BS5 markerlight that can fire at a different target too thanks to the Split Fire rule. His Volley Fire makes him a perfect fit in a big unit of Fire Warriors too. Should you decide to keep things cheap and take a Fireblade and an Ethereal there's the potential for one of your Fire Warrior teams to fire 4 shots each if they don't move. Combine that with markerlights and there's very little that can withstand that volume of fire. The drawback of course is that the unit has to stay still but depending on your play style that isn't necessarily such a problem.

Realistically though you're going to want a Commander so you'll have to choose between an Ethereal or Fireblade. The Ethereal may not do much as a model but the elemental powers have a bigger area of effect meaning a Fireblade will probably be second choice for most people. In mechanised forces a Tau general may decide that neither works that well and avoid both.

That being said, I think we'll actually see quite a lot of this guy (or at least some conversions of him) as he's disgustingly cheap. This makes him a perfect choice for the compulsory HQ in an allied detachment or for the Tau general who wants to splurge on other sections of the FOC. A Fireblade, 12 Fire Warriors with Shas'ui toting a markerlight will set you back 193pts. This gives you two markerlights for a Broadside team in an allied detachment for less than 450pts. Worth considering if your main army lacks anti-air capability like my Space Wolves do.

Ethereal
As I'm sure you're aware by the now the Ethereal is pretty useless as a model in itself. Two T3 wounds and no save means he's not tricky to kill so he's got to be buried in a large unit especially since he gives up an extra VP when he dies. It's worth throwing in a Shas'ui to add another character to accept a challenge on behalf of the Ethereal. I'll talk more about Tau combat in another post but just something to think about for now.

The saving grace for the Ethereal are his elemental powers. Something like 99% of the time you're going to use Storm of Fire but on occasion the others can have their use. Calm of Tides is rarely useful (if at all). FNP 6+ isn't great but if you're fighting Daemons you could end up with a better save if they've used Tzeentch powers! Running then firing Snap Shots could be good if your Ethereal's unit is on its own and trying to stay alive. As I say, Storm of Fire is the clear winner. Arranging your Fire Warriors around the Ethereal's unit will give you a disgusting amount of firepower and make charging your squads a scary prospect with Supporting Fire.

At 50pts it's easy to squeeze an Ethereal into any list but since it's not clear at the moment if his powers can be used within a transport, he's probably only of use in a footslogging gunline style cadre. Hopefully it'll get FAQd but there isn't a convincing argument either way at the moment. Should they FAQ it to allow use within a devilfish then it'll be an almost automatic choice for his unit.

Commander
The Commander is the Swiss Army knife of the Tau codex. Crisis suits have always had a dizzying array of options but the current incarnation of Commanders take it to a whole new level. For this reason he's got several different uses within your cadre. I'm going to write a separate post on Crisis teams and their possible builds but for now I think the key thing to think about is getting the most of the Commander's stats.

Essentially he's the same as a Shas'o from the old books (the Shas'el isn't really needed now Shas'vre are Ld 9) but slightly more expensive. In the old book he was 75pts but you'd normally take a multi-tracker which is included now. Therefore it's only really a 5pt increase for which you get some awesome warlord traits and Supporting Fire.

As I say, I'll talk about him in more depth later on but the internet is alive with people considering the uses for the Commander. In my opinion he needs to be with crisis suits. Giving him a Puretide and sticking him with Broadsides is tempting but then I feel you're wasting his abilities somewhat. As an example though, you'd give him a Puretide, Drone Controller (for the missile drones of the broadsides) and maybe a Sensor Suite. It's also possibly worth giving him iridium armour for this roll to keep up with the 2+ of the Broadsides. This incarnation would set you back 153pts before you give him any weapons (I'd give him missile pods and maybe a fusion). This would make for a broadside team that could deal with pretty much any vehicle (or several with target locks).

The problem is you're providing a very tempting unit for your opponent. He needs to take down the Broadsides to protect his flyers but also may as well shoot them as he can get Slay the Warlord at the same time. I'm not saying it's a bad tactic but I just don't think you're getting the most of him for the cost. Having such a good Broadside unit would mean you could just take a single team though and free up some Heavy slots.

Everything else can wait for the full post but I just want to mention the bodyguards here. Being able to take Signature Systems and auto-passing Look Out Sir! is good but I'm not convinced 10pts extra per suit is worth it. If you're struggling to find space in Elites then maybe but otherwise the standard crisis suits are a better option I reckon.

Conclusion
Taking the Special Characters into account as well, I'll probably be running a Commander and Ethereal. It feels like the most obvious combination though so perhaps I'm missing something. If points are at a premium I'd probably take a Fireblade in place of the Commander but that'd be a last resort as I really love them.

Of all of the FOC slots I think HQ is perhaps the trickiest. I'd love to take two commanders like I used to run but Ethereals are too tempting for how much more effective your army is and how cheap they are. As I said in my previous post, it all comes down to the style of cadre you want to run. Mechanised forces have different requirements to gunlines. The good thing about this codex is that both are viable.

Next up I'll finish up the Fast Attack section which is pretty crowded too! Once that's done I think I've covered everything but Crisis and Stealth suits. Getting there!
Posted by From The Fang at 23:27:00