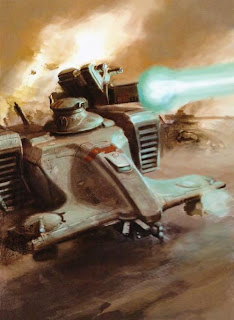 As I mentioned in the Broadside post. The Hammerhead Gunship is now the only place you can find the iconic S10 AP1 railgun that defined the Tau army for the last couple of editions. The Heavy Support section of the Tau FOC is pretty hotly contested but most people are likely to take a couple of Broadside teams supported by a Hammerhead or Sky Ray. The Sniper Teams simply won't get a look in I'm afraid. They're not awful but the other choices are brilliant so they'll lose out.

The Hammerhead Gunship has come down in price quite dramatically, well the railgun variant has at least. The armour profile of 13/12/10 has been retained, as has BS4. Interestingly submunition rounds are now a 5pt upgrade for your railgun but I think they should be always taken as it gives the hammerhead some flexibility.

The gun drones can now be swapped for a twin-linked burst cannon (rather than the two burst cannons previously, which doesn't make much difference) or a twin-linked SMS. Both upgrades are free and both put out 4 S5 shots. However, the SMS has much better range, Ignores Cover and doesn't require line of sight. The importance of this will become obvious later. As with other vehicles, Seeker Missiles can be taken but I don't really see the point.  The railgun can be swapped for an ion cannon but since this is the only place to find the railgun now I can't see many people opting for ion, even with the overcharge option.

The Hammerhead can be given Vehicle Battle Systems but, before we look at them, I need to talk about the most interesting thing about the new Hammerhead which is Commander Longstrike. For 45pts a single Hammerhead can have this little fella in the cockpit. Based on my experience of him in a couple of test games he's pretty awesome.

Longstrike makes your Hammerhead BS5 which means hitting nearly every time. He also has the Tank Hunter rule which means you can re-roll to penetrate vehicles which is frankly disgustingly good on an S10 weapon. Throw in Preferred Enemy (IG) and you're getting through Chimeras/Leman Russ pretty quickly. He also gives the tank a blacksun filter (only 1pt to buy anyway). The other cool thing he does is to give his Hammerhead the ability to fire Overwatch and Supporting Fire. Oh and it can do it several times a turn!! This is why the SMS is better as sometimes a unit being charged might not be in line of sight of the hammerhead but still within 6". The SMS can still hit the attackers even if the railgun can't. This makes your hammerhead a really scary proposition in the middle of your gunline.

Personally, I'm only planning on taking a single Longstrike Hammerhead in my armies so let's look at the Vehicle Battle Systems we can give to the tank. We don't need a blacksun filter or point defence targeting relay. The repair system is a bit of waste of time even for 5pts and we aren't going to reserve it so decoy launchers are out. The advanced targeting systems and flechette discharger are tempting but the hammerhead is already pretty expensive. The only upgrade I'd give a Longstrike Hammerhead then is the disruption pod as, if you can find some ruins to hide behind you can claim a near permanent 3+ cover save. Otherwise you're still getting 4+ from Jink.

Conclusion
The tank with submunition rounds, Longstrike and a disruption pod comes to 190pts which is cheaper than a pair of broadsides and probably just as good against ground targets. Essentially whilst it's alive you're killing a tank per turn.

Without Longstrike the tank is still BS4 and can be markerlight boosted to higher but personally I'd rather have Broadsides. Next up we'll round off the Heavy Support choices by looking at the Sky Ray. It's my favourite Tau model but there's stiff competition for it's place in the Tau army.
Posted by From The Fang at 17:00:00