Counters for 40K (or tools for laziness)

When I first got into 40K the boxed set came with counters/markers to use to represent the status of your units. Things like hidden/detected, broken, wounds etc. I still have these markers from 2nd edition but they're less and less useful. During a battle it'd be really handy to glance across the field and instantly be able to see the status of my units. Whilst most people would simply use dice to represent things like wounds, cover saves, etc. I tend to find that they get picked up by mistake when you need all those dice when Ragnar gets +3 to his squads attacks!
The only markers that were still useful from my original set were the wound markers. The problem is that the old markers all look pretty similar with just a differing number on them. Not really a problem until you're fishing through the pot trying to find the last "1" and you keep turning over "2s" and "3s". This issue was nicely solved by the door prize at Freebootaz which gave us teardrop shaped markers for the wounds as well as some nice objective markers. Gale Force Nine who provided the door prize also make a nice range of other counters and gaming aids. I'm very tempted to get some of their smoke and also the deployment zone markers. They also make tokens for the various states of vehicles and infantry. However, I'm thinking I'd rather spend the cash on plastic crack so I had a bash at making my own.

Ron over at From The Warp had produced some very nice designs to print out and stick on 25mm bases. Whilst I'm impressed by the time and effort he's obviously put in I wanted to make my own so that they'd be unique to me. I came up with these: 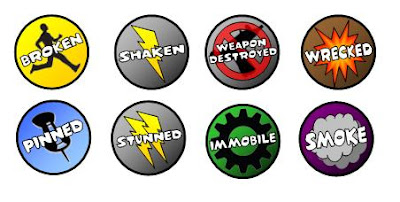 I'm pretty pleased with how they turned out. Not bad for an hour or so on MS Word! Now I just need to print some out and get cutting and sticking! Think I'll go for 3 of each until I figure out which we seem to use most of.
Feel free to steal them if you like.
Posted by From The Fang at 13:53:00