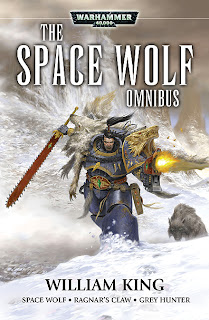 Matt lent me the first Space Wolves omnibus over Christmas and I just finished it this morning when I got home from work. The omnibus contains three books (all by William King) entitled "Space Wolf", "Ragnar's Claw" and "Grey Hunter". This is my first foray into the world of the Black Library so I've got nothing to compare it to but here goes anyway.
I don't want to spoil it for anyone else but a basic synopsis is that the first book tracks Ragnar's progress from being picked up by Wolf Priests from his Fenrisian clan to training and eventual acceptance as a Space Wolf. "Ragnar's Claw" sees our hero as a Blood Claw taking on a mission to secure an important alien artifact in order to save a seemingly doomed planet. Finally, Grey Hunter describes the Space Wolves defending one of their own worlds from an attack by Chaos.

Many other reviewers have commented that the books make the Space Wolves out to be immature, beer swilling space vikings. I personally don't see what the problem with that image is. The Space Wolves are different from the other chapters since they have the canis helix which makes them that little bit more feral in nature. Their background is that of warring tribal clans on a hostile world and it seems they retain some of these aspects when they become Space Marines. Makes sense to me anyway.

I will say however, that at times the book seems to be directed at a younger audience which is again fair enough since let's face it there's a lot of teenagers who play 40K. Whilst it certainly isn't a high brow intellectual read the "childishness" didn't bother me too much. There are times when the banter between the Space Wolves seems a bit unnecessary but I think it's important to remember that throughout all three books Ragnar is still a Blood Claw. Those guys are meant to be immature, battle hungry, moody and volatile as they struggle to get to grips with the changes going on in their bodies - kind of like teenagers!

The internal monologue can get a little tiresome at times. In nearly every situation Ragnar seems to be the ultimate pessimist. I know this is a device by the author to point out the enormity of the situations but it comes across as stating the obvious and puts the brakes on at times. When Ragnar isn't being all doom and gloom he's thinking he can take on the world which again is fine as part of the Blood Claw process.

The action in these books is, for the most part, well written. There are words and terms that seem to get overused but then I suppose it's difficult to come up with enough metaphors for the way in which someone's head gets split open. The writing conveys a good sense of pace and there are times when you genuninely wonder how they're going to get out of it. In the end you know he's going to survive because the whole story is written in flashback form where Ragnar is remembering how he got to where he is today as a Wolf Lord.

The main thing I like about the book wasn't really the main plot itself but rather learning about the background of the Space Wolves. There's that little bit of fluff in the codex but otherwise we don't get told all that much and I can't say I've read it all anyway. There were things I'd never thought about like why Space Wolves tend to avoid wearing their helments and the hierarchy within each great company. In addition I'd never really considered the role that wolf priests, iron priests and rune priests take outside of a battle setting.

There's a good few days reading here and for the most part it's enjoyable. It's definitely made me want to buy the second omnibus and read some of the Horus Heresy books. I think as long as you aren't expecting a literary masterpiece and you go into it open minded then you'll enjoy the Space Wolves Omnibus. It's cemented my love of the chapter and inspired me to get cracking painting the models that I've got, particularly Ragnar!

Overall I'd give it a 7/10. Enjoyable to read for the most part but there's excessive description at some points. Clearly aimed at a slightly younger audience but it doesn't detract too much from the action.
Posted by From The Fang at 18:30:00