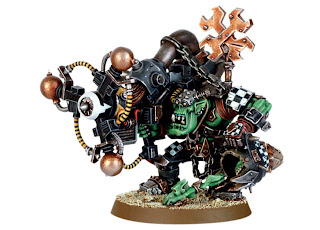 Since I finished the Special Characters series a while a go (there's links to each article on the right). I decided I needed a new running series. Welcome to Know Thy Enemy. Each post will cover a different race from the WH40K universe and what you can expect when facing them with your Space Wolves army. Whilst these will obviously geared towards SW players, anyone reading with another army will certainly find something useful from each post. Without further ado we'll start with everyone's favourite greenskins, the Orks!
The Basics
The Orks are certainly the comedy army of 40K. I don't mean that they aren't a serious threat just that there's soo many random things that can happen when facing them that it can sometimes be comical! They're an all out assault army that likes nothing more than getting right in your face as early as possible. Their average BS of 2 means that it's unlikely they'll give you any problems at range (although you'll be surprised how many 5s & 6s Ork players seem to roll) but once they're in combat with you it's very hard to shift them.
There are probably three main types of Ork armies out there. The most basic of which is the footslogging army with large mobs of boyz who weather a hail of fire as they charge into combat with you. The second is based around hordes of trukks or battlewagons filled with various nasties and finally the more dark sider stats army, the bikers army.
Strengths and Weaknesses
As I've already mentioned Orks are excellent in hand-to-hand combat but struggle when it comes to shooting. Their average troops are pretty cheap (6pts each) which means you should expect to face a lot of them. The combination of furious charge and a Waaagh! (which I'll cover in a bit) means you really need to be denying them the charge or peppering them with fire so it doesn't hurt as much when they get to your lines. The problem is that if a unit of orks is over 10 models strong then it becomes fearless which means you're unlikely to make them run.
The only bonus is that as Space Wolves it doesn't matter so much if they do get the charge (which they mostly will). Ork boyz only have an initiative of 2 (3 on the charge) which means that if you get a nice counter-attack you can thin them out pretty well before they do you too much damage.
The Waaagh! is what converts a strong combat army into a deadly one. Once per game your opponent can call a Waaagh! which means most of his army becomes Fleet allowing him to reach your lines from upto 18" away. It's even more impressive when you throw Ghazghkull into the mix but I'll get to that later.
Finally, their unpredictability is both a strength and a weakness at the same time. Sometimes things can go horribly wrong and units can take themselves out. Other times they pull off a devastating move which you had no way of protecting yourself against. It's worth bearing in mind that most of the "random" units get overlooked by internet lists as they're just too unreliable. I think it's a real shame since it's what makes Orks fun to play against.
5 Units to Watch Out For 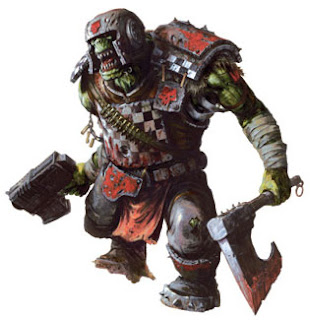 1. BOYZ
Perhaps the most lethal unit in the Ork army is it's most basic troops choice, Boyz. On paper they don't seem like much but when you consider that you can have 30 of them in a mob who'll be fearless until you kill 2/3 of them it soon becomes clear that they're not to be scoffed at. They've got a handy WS of 4 and 4 S4 attacks each on the charge. A totally vanilla 30 strong mob (costing 180pts) puts out 120 attacks then! The only saving grace is that initiative that I've mentioned.
Your best bet for dealing with them is plenty of pie plates and rapid fire. Thin out their numbers before they get close. Easier said than done on the Waaagh! though.
2. BIG MEKS
These basically come in two different flavours. Kustom force field or Shokk attack gun. The former grants all units within 6" a 5+ cover save and vehicles are counted as obscured targets. This can make it surprisingly difficult to blow up trukks/battlewagons before they get to you. The Shokk attack gun can either be devastating or provide you with some fantastic comedy moments. It's strength is determined by rolling 2D6 each time it fires and on doubles some funny things can happen such as the big mek being launched into the middle of his target unit. Less funny when a whole unit is removed from play though!
3. NOBZ
Nobz are the Ork equivalent of our Wolf Guard. They act as an upgrade to several of the basic units. These are most often used with power klaws in mobs of boyz. There isn't anything to like about a guy who has two wounds and 4 S9 power fist attacks on the charge! Not fun when your opponent takes a full squad of nobz with a painboy giving them feel no pain. They can be very hard to shift. As I've mentioned these are also used as bikers. This gives them two wounds at T5 and 5 attacks each on the charge (without klaws). Couple that with the speed at which they can reach your lines (with a 3+ cover save on their approach) and they can be really nasty. This is why nob biker armies are pretty deadly in tournaments. Another alternative is meganobz, a bit like terminators but without the invulnerable save. The only saving grace is that they're slow and purposeful so you can usually keep your distance.
4. BATTLEWAGONS
Along with their less well armoured cousins, trukks, battlewagons are an essential part of any mechanised ork force. What makes them ideal for the orks is that they are all open topped and the trukks are fast. This means that the they can move 12" (18" for trukks) and then the occupants can disembark and still assault 6". This gives the unit an effective range of 20" (26" for trukks). Battlewagons are AV14 on the front which means they can be used to protect the trukks for the first turn or two. Battlewagons can also have a fearsome array of weaponry. The killkannon is an S7 AP3 ordnance weapon, the Zzap gun has 2D6 strength and AP2 and the death rolla inflicts D6 S10 hits when tank shocking.
5. GHAZGHKULL THRAKKA 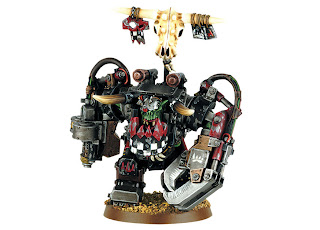 This guy is just unreal. Whilst in most armies it often isn't worth the cost to include a special character, Ghazghkull is all but essential at around the 2K mark. He's got 7 S10 attacks on the charge. He's also pretty difficult to kill. Assuming you wipe out the probably hefty unit he's with you'll be facing a 2+ save and Eternal Warrior to remove his 4 wounds.

What makes Ghazghkull worth taking though (if the above wasn't enough) is his special Waaagh! This lasts two turns and makes all ork units fearless as well as giving them a guaranteed 6" run and therefore 18" charge. That ork army that seemed far enough away to deal with suddenly got real close.

Oh and it makes his 2+ save invulnerable for the two turns the Waaagh! is in effect. That means in order to kill him during those two turns you'd need to inflict 6 hits per wound (on average). My advice, don't even try to take him down during the Waaagh! focus on everyone else and come back to him once he's not so insanely hard to touch.

Speaking of which I notice Ghazghkull has been thrown into the Arena of Death over at Claws and Fists.

OTHER NOTABLE UNITS
Kommandos when accompanied by Snikrot can come on from any table edge without having to roll for it when they come in from reserve. Stormboyz with Zagstruk can deep strike and assault the same turn. A full squad of Lootas can potentially put out 45 S7 shots per turn. Tankbustas are a squad full of the equivalent of a krak missile launcher for 15pts each. Finally, Killa Kans are cheap dakka considering the number of S6 blasts they can pump out.

How to beat them with Space Wolves
The key to our success when fighting Orks is to not fall into the trap of sitting back and letting them come to you. It's unlikely you'll thin them out enough to stop them being a real handful in combat by standing your ground. The best bet is to take the fight to them and try to deny them the torrent effect, making sure each of your units is only engaged by one of your opponents.

Try and distract them with fast moving units such as land speeders or even drop pods. This will split up their force and make the Waaagh! less devastating. Protecting your long fangs from their reserves will not be easy so a couple of squads is probably advisable. Template weapons are your friend against foot slogging armies so plenty of missile launchers.

Stop transports in their tracks as early as possible. Whilst this is obvious against any mech army it really pays off against Orks. Try and blow up the front line of trukks so that the rest have to steer around wreckage or difficult terrain. If Ghazghkull is in a transport (and he probably will be) then make that a priority. You don't really want him getting anywhere near you and better to have him slogging it on foot (slowly) while you take away his bodyguard.

Whilst it may be tempting to ditch the transports in favour of getting to shoot at them for longer I'd keep them so that he has to demech you thus denying him the furious charge.

Jaws of the World Wolf is going to cause havoc against orks. Try and target the power klaw nobz and you'll probably take a good number of boyz down with him. Without the nob the squad is a lot less potent and more likely to break (if he had a bosspole). Murderous Hurricane can really hurt a boyz squad, in the initial attack isn't successful then your opponent still has to choose between staying still or risking losing a good few orks to dangerous terrain tests.

The only special character I'd bother with is Ragnar. His flurry of attacks and furious charge will make mincemeat of Orks should he get the charge!

Right, time to put my money where my mouth is. Me and Matt are having an Orktakular day at the weekend. I'm playing his Orks with 2K of my Wolves and then I take over the green tide and take on 2K of his blood angels. Let's see if my tips to take them down are actually any good! I predict I'll fail miserably and you'll all lose what little respect you may have had for me!
Posted by From The Fang at 18:23:00