It's that time again. Time for more crusty pie chart goodness. Since it's the tenth Blog Wars I thought we needed an extra helping of pie so it's going to be a bumper post! For those of you who don't know already, whenever I run Blog Wars I keep a note of the armies that everyone is going to use (I check lists in advance). I then correlate all the data and produce some delicious pie! You can see previous events' pie offerings for BW5, BW6, BW7, BW8 and BW9 by clicking.

Thank you to everyone for submitting their lists. I've now checked them all and fairly early on wished I'd remembered to ask people to send them in Battlescribe format. It made things soo quick last time and I regretted not mentioning it this time around. I think it's going to be a strong tournament but hopefully one that people can still enjoy. There are some tough lists in there but they are balanced by other tough ones in my opinion. At least I hope so, there's no way of telling who will match up against who. Enough of that though. Let's tuck into some pies.

The Pie Charts
As ever let's start by looking at the most popular choices for first detachment at Blog Wars (I'm avoiding using the term "Primary Detachment" as these aren't necessarily). Unlike last time we haven't seen such a huge wave of new books in the run up to the event with Space Marines and Dark Angels coming later in the same month BW9 ran but neither of which having new units to speak of. 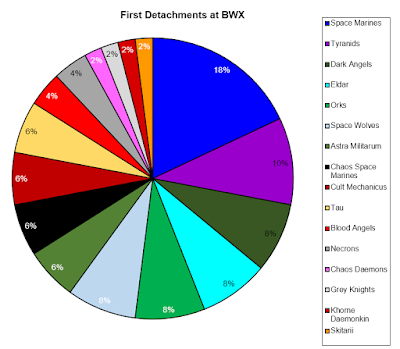 Unsurprisingly, Space Marines have remained a popular choice with nearly 1 in 5 of the armies at Blog Wars fielding them as their first detachment. When you factor in the Dark Angels, Space Wolves, Grey Knights and Blood Angels we've got around 40% power armour (45% if we include the CSM). Eldar have a similar share of the pie but Necrons have dropped pretty dramatically with just two lists compared to six at the previous event. There are more Xenos hordes around though with an increased number of Ork and Tyranid players. We've also got our first Khorne Daemonkin army plus an increased number of Mechanicum players. The most notable absence here of course is that there are no Imperial Knights as they can only be taken in Oathsworm formations this time around. The main thing to note again though is there are a huge number of different factions represented so even if you get hammered in all three games it should be by a difference race each time!!

As for second detachments, BWX army selection was a little different as for the first time the same detachment could be taken twice. There were only a handful of players who went for this option though as we'll see later. Anyway, here's a breakdown of the second detachment factions: 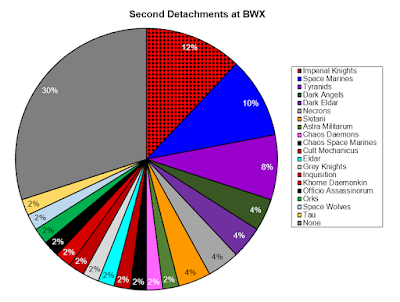 The share given over to Imperial Knights hasn't changed from last time but the most interesting thing is that at BW9 we only have half of the armies featuring a second detachment whereas at BWX we're getting over two thirds with a second. Like last time though there's a huge mixture of races with only Harlequins and Adepta Sororitas (Sisters) not represented. Incidentally, Militarum Tempestus aren't technically represented with their own detachment but they do feature in some of the Astra Militarum lists. If nothing else, it seems 7th edition has encouraged variety, at least at Blog Wars anyway.

For comparison's sake let's look at the Imperium vs. Xenos pie chart again: 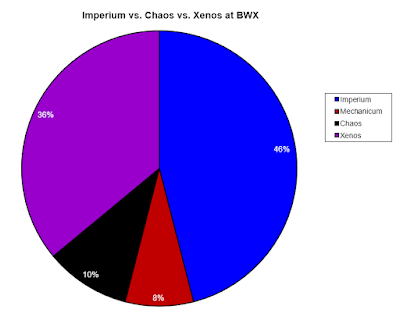 That appears to be a steady portion of 46% Imperial armies compared to last time but that depends on how you group the Mechanicum armies. I've kept them separate here but over half the armies would be "Imperial" if you included them. The chunk of Chaos armies has increased but we've lost about a quarter of the Xenos contingent. Pretty surprising when you consider how strong Tau, Eldar and Necrons are (even without the new Tau book).

Finally, let's look at Lords of War again. They made their first appearance at BW9 with no small measure of controversy so how many can you expect to see at BWX? 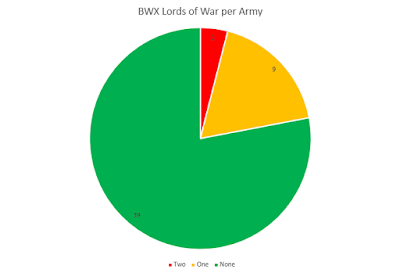 Well actually, numbers are down from last time. Not by a huge amount but they're certainly less popular. That may be because I've limited the use of Imperial Knights to two but nothing else has changed. I think it's probably a good thing though. Even so, let's look at which LoW we'll be seeing: 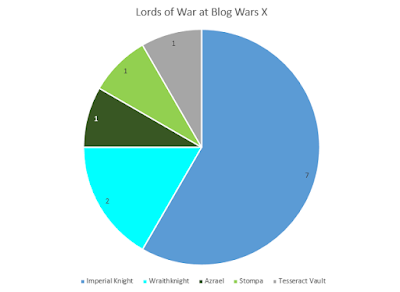 I'm sure people will be pleased to see that Imperial Knight numbers are down from 15 to 7 with only one army (I think) having two of them. I expect they'll be a much less significant part of the event this time and I'd be surprised if we see them on the top tables at the end of the day. It's shame that we aren't getting any Baneblades or Khornemowers but I am glad that there'll at least be one Stompa still!

Special Characters
I've got some more posts planned for after the event looking at the evolution of SCs over the last five years of Blog Wars but they remain a compulsory part of a BW army. Thankfully we haven't seen any more deleted since the last event but nor have we seen any come back sadly. There's still just a handful of armies without them and once again Kor'sarro Khan is a favourite. This time though he's only as popular as Arjac and Yriel, both of which also appear 3 times. There are some left-field choices in there too which is always nice to see but I'll not spoil them for you.

Incidentally, I never did get around to offering an incentive for taking an unloved SC that hasn't been fielded before. My backup list does feature Ragnar though since he's never made an appearance. Of course, he still won't have unless I'm forced to play by odd numbers on the day. I'm hoping this isn't necessary though. Speaking of which....

Attendance
We had originally sold the full 50 but I've had a drop-out and despite my best efforts I've not been able to sell the final ticket. We may event lose another couple because Lufthansa are talking about strikes which would prevent our two international players from attending. Booooo! 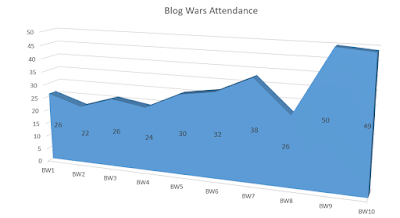 Still, I can't complain about the support you guys continue to give this event. It's reassuring after the comparatively low numbers at BW8. It's also a big deal for the Winter event which has often seen lower numbers compared to the Summer one.

Bonus Pie Charts
Since this is the tenth event I thought I'd throw in some bonus pie charts for what I consider to be interesting things. Since I've allowed two of the same detachment we've seen an increase in uptake of a second detachment: 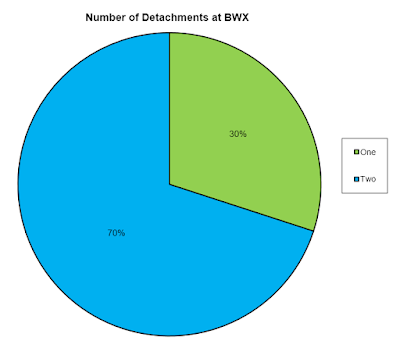 Adding up all the detachments together, and ignoring the 15 "gaps" where just one detachment was taken, here's a look at the types of detachment people are fielding: 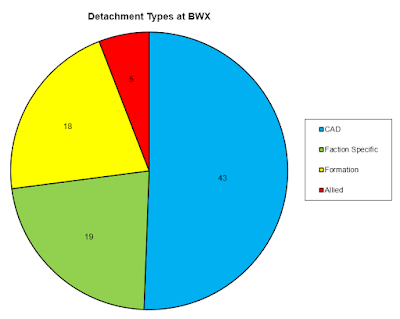 It's interesting that just over half of the detachments are CADs. Of course, some armies don't have the option to take anything else but still, with all of the formations and such around it's still interesting (you may disagree). I'm also pretty surprised that there are still people using allied detachments but I suppose they do still offer the advantages of Objective Secured and a single Troop. Finally for these bonus pies here's one showing the combinations of detachments we're seeing: 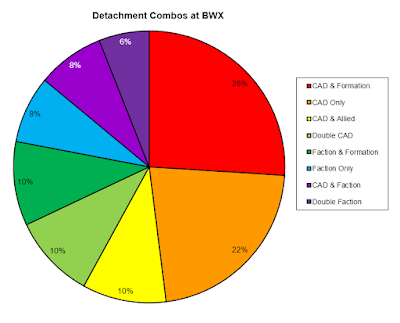 Awww a pretty rainbow.... ahem. There's a surprisingly low number of double CAD armies and not all of them are the same faction. Of all the armies, about a third feature two detachments from the same faction though. Damn, should've done another pie chart to show that!

Conclusion
Right, that's more than enough pie for one night. I'll be victim of a popular football chant if I put anymore up. I hope you enjoy them in all their circular segmental loveliness in the same way that I do. As always I'm looking forward to the event and I hope you all are too. It's going to be interesting to see who comes out on top of the pile.

At this point I'd normally say "stay tuned for the prize announcement post" but I'm not going to this time as I'll keep it all a surprise for the big day. Suffice to say there's a little something extra because it's the tenth event. See you all in a few days! Time for me to go and cut out hundreds of bits of paper!
Posted by From The Fang at 21:44:00