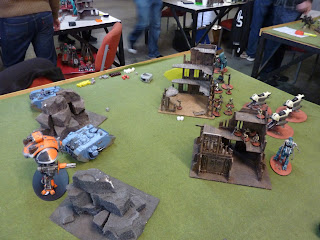 When I had a player drop out a week or two before the event I tried to sell the final ticket but also figured I ought to write a backup army list in case I couldn't fill the slot. Right up until the day I wasn't expecting to play as there's nearly always an on-the-day dropout. Not this time though, the full 49 showed up so I quickly unpacked. Here's my army list. Bear in mind this is just a sensible TO's army. It features very few models (only 3 to deploy), has no psychic powers, no horde and not all that much complication. I basically went for "how quick can I spend 1,850pts?".

Let's start with a Knight Crusader with rapid-fire battle cannon, meltagun and ironstorm missile pod. Throw in a Land Raider and Land Raider Redeemer (with multi-melta) and that's nearly 1,000 spent already. Add in 5 Blood Claws in a Stormwolf (with multi-melta) and Ragnar Blackmane that gives me just under 400 pts to throw an 8-man Grey Hunter pack in each LR (with melee weapons, melta and WG pack leader sporting CM/PF). Obviously, some armies will find AV14 LRs and an AV13 Knight pretty tough to deal with but it's by no means a good list. Let's see how it fared: 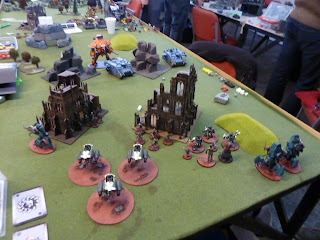 Archie Homer's Dark Mechanicum army was always going to be joy to play against. Firstly because there are some stunning conversions in there and secondly because I've yet to play a game against the new Ad Mech stuff so I was looking forward to it from the off. Archie did his best to explain what everything did but I didn't take a lot of it in and obviously with so many conversions I wasn't always totally sure what was what (despite Archie's handy picture reference book). What I did hear was "they have haywire guns" so I knew what to shoot first! 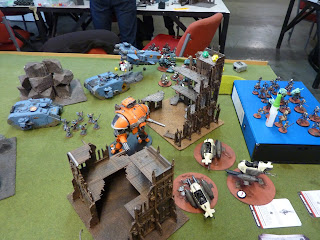 We were playing Cleanse the Xenos (effectively Purge the Alien) on Hammer & Anvil deployment. Archie gave me first turn, hoping it would get me in range without suffering too much damage. However, with PotMS and decent range on the IK I was able to cut down all but one member of one of the aforementioned haywire squads (Skitarii Rangers?). The IK made short work of the Ruststalkers with his gatling cannon too giving me First Strike. He'd infiltrated his Sicarians behind my lines but I figured I'd ignore them and hope to be able to come back for them with my Knight or flyer later on. In response Archie was able to strip three hull points from my LR with haywire from two squads but he needed help from the Dunecrawlers to finish it off. Fortunately for him my Grey Hunters were pinned by the fire coming in from all sides. 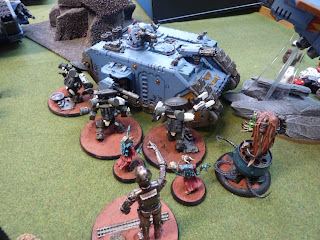 The Space Wolf response was pretty brutal with the Sydonian Dragoon falling to the IK's gatling cannon and all the Rangers (?) dying to fire from the Land Raiders and newly arrived flyer. The snipers (Rangers/Vanguard?) also met their demise with fire from the Knight and the Redeemer. The Kastellan Robots loomed menacingly close to the Redeemer but fortunately for me failed their charge. This bought me time to finish off the Dunecrawlers with the Knight and the Ironstriders with the flyer. The Robots would be easily in charge range this time though and tore the Redeemer apart. That left them wide open for a charge from both Grey Hunter squads and the Imperial Knight meaning the game would end in a brutal battle royale! 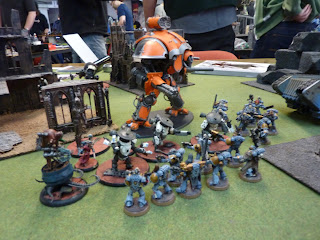 Ragnar did everything he could to try and kill the Dominus in a challenge but it just kept passing saves. Ragnar did the same though, using his Incredible Reflexes to make a crucial re-roll. The IK managed to get three stomp attempts but sadly no 6s appeared so the combat resulted in a narrow win for the Space Wolves. They then caught the Robots in a sweeping advance. I protested that they must be Fearless but Archie couldn't find anything saying they were (he realised later in the day unfortunately). It was a shame to end the game on a false victory but it felt very one sided by that point anyway. I walked away with a 1755 to 716 (27-11) victory and 25 of a possible 30 tournament points. Not a bad start eh?

Conclusion
I'll cover the rest of my battles in the next post. I wish I'd seen more of the Cult Mech and Skitarii stuff but once the Haywire was gone they really struggled to do any damage to me and the Knight was too dominant. It's only the second time I've used the Knight and I thoroughly enjoyed it. As I learned later in the day they can be pretty fragile but in that game it felt unstoppable and probably did most of the damage.
Posted by From The Fang at 17:00:00