Blog Wars X - The Aftermath (End of an Era)

Yesterday saw the tenth and final Blog Wars event take place at the NWGC in Stockport..... Wait. Did he say final?!? Yep, that's right (I did hint with the "X"). After a lot of thought and discussion with my wife and friends on the subject I decided that it was time to put Blog Wars to bed. It's been five years now and a lot has changed in that time. Not just with 40K but with my life too. I wasn't even married when I started it and now I have a very nearly two year old!!

The name doesn't make much sense any more since the proportion of bloggers isn't as high. I think it might put people off despite me trying to make it clear it's open to anyone. It's also getting harder to field a special character since GW keep deleting them. Ultimately though, I feel the format is becoming stale and I don't want to get to the point where I don't want to run a tournament because I'm sick of the format. The good news is that I'll still be running two events next year but they'll be very different in some ways and similar in others. Still with the same ethos of friendly gaming over no holds barred competition but I want to try some new ideas out. Fluffageddon will probably still take the November slot (it's up to Matt) but there'll be an event there either way and something new (and hopefully exciting) in June. The guys at BWX already know what's coming but I'd appreciate it if they avoid blogging about it so they don't steal my thunder!

Anyway, I'll be writing a series of posts recapping Blog Wars over the last few years (with pie charts!) but for today let's find out what happened at BWX. Whilst I just said I'm growing tired of the format, I still tried some new things out. Most notably a scoring system I stole from Matt's postponed event, Fluffageddon and a change to the way the painting competition works. I'm sure you all came here to find out your results though so let's get that out of the way: 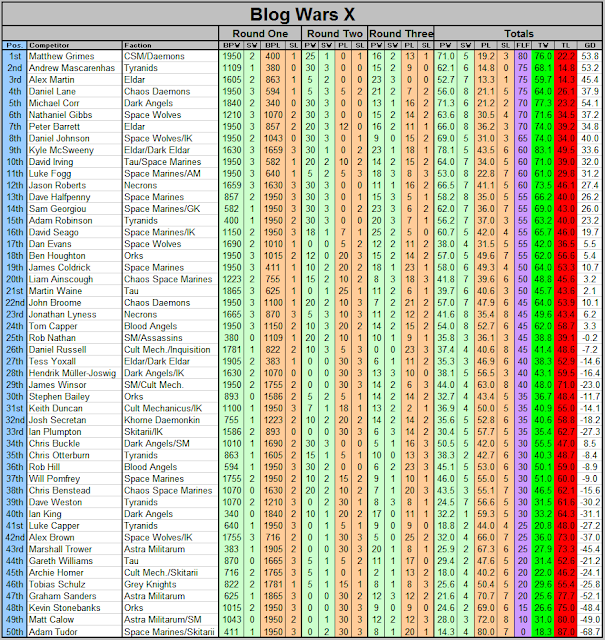 We managed to have a top three made up of people who've either never played at Blog Wars or never placed. Congratulations to Matthew Grimes on winning with his Chaos Space Marines and Chaos Daemons on just his second visit to BW. I believe he played Ravenwing in the final and was helped massively by his AP3 flamers! Former champion, Dan Lane, finished just out of the podium positions in 4th. Luke Fogg was probably instrumental in denying him the top positions with the near draw in game two!

I'd originally decided that I wouldn't be playing in the event since I'd again sold the full 50 tickets. However, when I had a drop-out, and was unable to sell the final ticket, I cobbled a list together designed to have very few units to make my games as quick as possible. I will, of course, be posting that list and full battle reports but you can see from the results table above that I was nowhere near repeating my mistake of winning it again! It was quite a mission to keep the event running smoothly and concentrate on my games but as far as I know there was no controversy surrounding the results (which is a nice change - let's hope nothing comes up). We did run a little bit behind schedule mind you.

I didn't hear any particular complaints about filthy lists (barring a couple about the Tyranids flyers and people cursing bikes) which is a promising sign. I know of at least a couple of players who told me they'd toned things down a bit this time which I appreciate.

The real winner of the day was Ian Plumpton though, he walked away with a Tau Stormsurge kit (RRP £90), despite finishing 33rd. I think that sums up pretty nicely what BW is supposed to be all about! In fact everyone won something for the first time in BW history as I gave away a set of custom BW objective markers to everyone who showed up!

I was also the recipient of some prizes as Gareth Williams took it upon himself to co-ordinate a whip round netting me my own Stormsurge, a Tau codex and a tenner to "use as a bookmark". I can't thank you guys enough for it. I appreciate that you didn't have to put in and for you all to be so generous is really touching. That hopefully means you all enjoyed yourselves!

A massive thank you to everyone who came to this final outing of Blog Wars, particularly Hendrik and Tobias who managed to make it from Germany despite a Lufthansa strike! It was therefore a little funny that Hendrik won the F.A.T. mat meaning I'll need to ship it out to him rather than him trying to squeeze it into his luggage!

As I've said, stay tuned for a rundown of my battles plus, of course, full details of the painting competition (with a different format this time). I have to say I didn't get chance to look at any of the armies so I'm just hoping Liam managed to get some good pictures for me when I passed him my camera!

Let me finish by saying thank you to the 136 different people who've been to at least one Blog Wars event. I never, in my wildest dreams, expected to be sitting here five years on, retiring the event with back to back 50 player attendances! I appreciate all the support and I hope you'll stick with me whilst I try to do something different.
Posted by From The Fang at 21:00:00