The final category in the BWX Painting Competition was Best Hero (formerly Special Character). There were as many entries in this section as in the other two combined. I think this is a good way of allowing people to showcase their skills in painting a single miniature rather than it being lost in a full army. This was a much closer competition too with just a single vote separating first and second. Who knows what would've happened if the full 49 players had voted?!

Incidentally, these figures were displayed on the prize table so you can see what was on offer! Plenty of new Tau stuff, Execution Force and a F.A.T mat. I wonder why people like Blog Wars....

Runners Up
Luke Capper (Swarmlord), Ian King (1st Edition Librarian), Dave Halfpenny (Tigurius), Tom Capper (Corbulo), Will Pomfrey (Sgt. Garadon), Alex Martin (Maugan Ra) and James Winsor (Vulkan He'stan) all get a mention here for their fine entries. All of which are well ahead of anything I've produced! Hopefully I can enter something at Fluffageddon if Matt has a suitable category for me. Just missing out on the top 3 were Rob Hill (Lemartes) and Matthew Grimes (Ahriman). 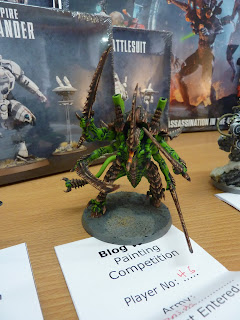 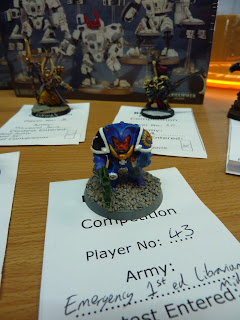 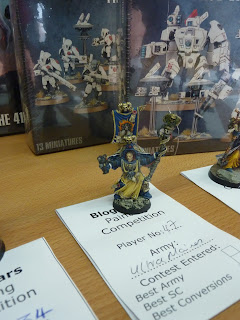 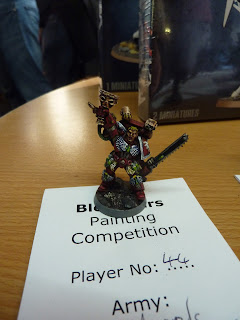 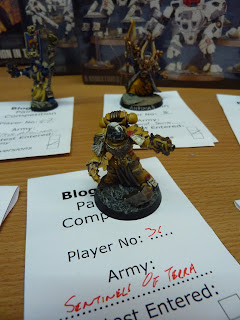 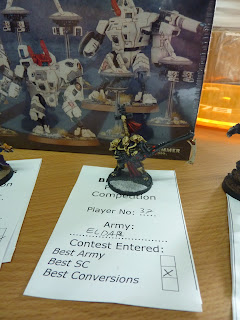 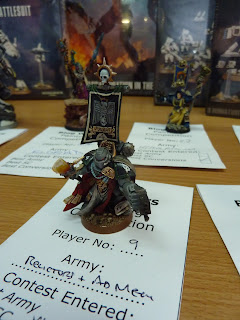 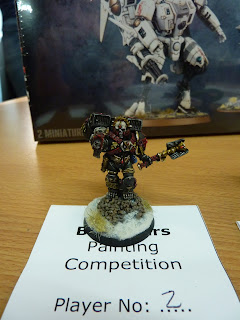 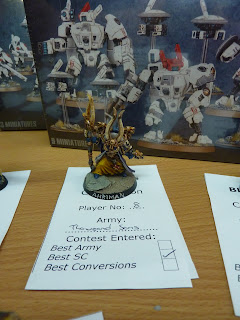 Third Place
I'm pretty sure Chris Benstead has won Best Character with his Abaddon at some point in BW history but nevertheless it still catches peoples' eyes. With good reason too as it's a great centrepiece for his stunning Iron Warriors force (if technically in the wrong Legion....). 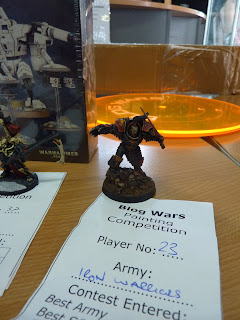 Second Place
Tess Yoxall rather controversially entered his Eldrad Ulthran who wasn't actually his Hero for BW purposes. He had cleared it with me in advance though and I've had allowed anyone else who asked to do the same. It isn't that serious an even follks! Anyway, I think you'll agree it's a stunning piece and was only pipped for first place by a single vote! 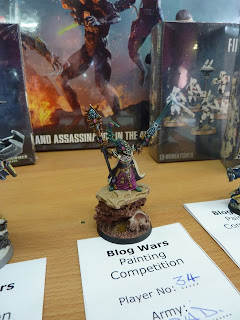 Winner
Rounding out a clean sweep for the "Friends of Dave Weston" crew, Ben Houghton's Ghazghkull (from an equally stunning Ork army) was a well deserved winner. Let's all bask in the Beast of Armageddon's glory: 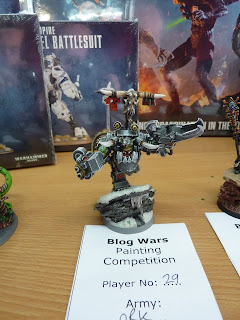