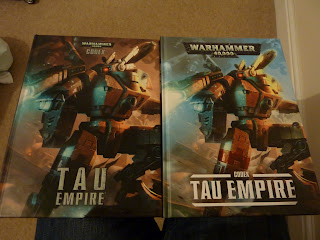 Apologies for the delay in reacting to the new book but thanks to the fantastic people who come to Blog Wars, I'm now the proud owner of a copy of the new Tau codex and a Stormsurge battlesuit. Expect to see more of the latter in upcoming posts but it's the former I want to talk about today. Whilst we've had several 7th edition books that don't feature massive changes, this new Tau codex is the first to see hardly any changes to the existing units. I had a discussion with Gareth Newton-Williams (who kindly organised the whip-round at BWX that bought me my codex) and I was saying that I couldn't really justify buying it. With the rules for the new units published in WD (or in the kits themselves) and pretty much every formation from the codex leaked online it seemed unnecessary. GW also took the strange step of saying you could buy the Kauyon campaign book to get all the new rules instead. The campaign book that costs £45 instead of £30 for the codex. What is a pain in the arse though is that the Tidewall isn't in the codex but does appear in Kauyon but that's no accident let's face it.

Don't get me wrong I'm tempted by the campaign books in their own right but don't try to sell them to me as an alternative to a codex! Anyway, moving on. This will just take a couple of posts rather than my usual several posts since not a lot has changed.

The Book
The cover art is just a recoloured version of the beautiful Raymond Swanland piece that adorned the "old" book. The spines are identical and the inside cover is the same artwork but red instead of blue?!? The most noticeable difference inside is the switch from predominantly ochre Tau to the white colour scheme of the Vior'la sept. Personally I think it's a nice change to break up them monotony of the yellowy-brownness. I like how the new kits look in white and I only wish I'd persevered with white Tau instead of copping out and going for grey. Otherwise the big change in the book is the now familiar switch to dataslates. I've already expressed my views on this but I'm slowly coming round to them. There are also some of these 2D colour scheme pictures which are essentially page fillers as far as I'm concerned. 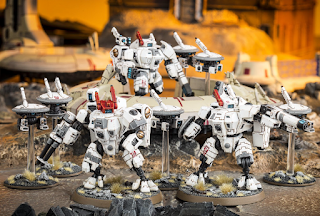 It's great to finally have some new kits for Crisis suits and the Commander. The interim new commander kit that came in finecast was a bit of a disappointment for me. I bought one but never assembled it so it went on
eBay. The new crisis suits are great though. I was worried they'd change to the more curvy aesthetic of the FW suits but I'm pleased to see the same basic look with a few minor tweaks and a lot more pose-ability. I'm tempted to buy a set and magnetise them for every weapon just to replace some of the incredibly static poses I created with the old kit thanks to my poor early modelling skills. 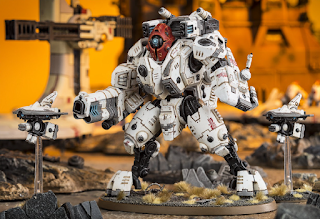 The Ghostkeel and Stormsurge are taking Tau even further down the road towards Gundam etc. I'm actually a big fan of both of them and I think it's a great touch to be able to see the pilots. Without that you can start to feel that these suits are just monstrous creatures and forget that they're immense feats of technology. Finally, the new Fire Warriors are again a subtle improvement and I like the look of the new Breacher team. I'll probably playtest them a bit with pathfinder proxies before I commit to any but they're certainly nice to look at. I defy anyone to tell the difference between the Strike team models and the old ones without a thorough inspection. Still, it's nice to see GW update some tired kits and it gives me hope for some other models that need it (here's looking at you, CSM).

Changes to Existing Stuff
The Kauyon book has a handy guide to the seven minor changes to the book. There's nothing particularly earth-shattering here. 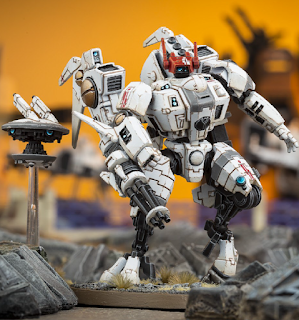 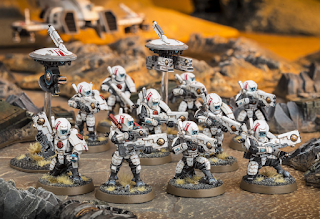 Not much has changed really. You might think I'd see that as a good thing. In a way I do but I really think that some things needed to go from the old book. I don't hold with the view that Devilfish need to come down in price. They're 12-11-10 and those extra drones can be a pain in the arse (ask Matt). Likewise I think everything else is reasonably costed with one major exception: Signature Systems. Part of me wanted them changed completely but I'd have also settled for a massive points hike. Compared to every other book's "relics", the signature systems are just too cheap for what they do. I know the MSSS and CaCN stop you from firing but ask anyone who's played against a buff-commander (again, Matt) what they thinks of that. It might sound crazy for a Tau player to be asking for stuff to be toned down but they're just daft at times. They're probably no worse than some of the formations in this book (more on them in the next post) and obviously I'm not being forced to take a buff-commander but it frustrates me that they're pretty much an auto-include.

Think what you will of the new Necron book but at least silliness like Mindshackle Scarabs and Tesla on Snap Shots was sorted out. People already hate Tau for their ridiculous rules and I feel that this codex isn't going to help matters. It's frustrating when you think back to those heady days before the Necron and Eldar books dropped when it looked like GW might actually find a balancing point. Play Wolves, GK, BA etc against each other and you get some great games. Granted DE was a clusterfuck and Orks still struggle at times but generally speaking they're quite balanced between each other. I welcome the new units for some variety but I fear we'll still just see broadside-spam and other such silliness.

Right, that'll do for today. In Friday's post I'll talk about the new units (yay!) and formations (sigh). Incidentally, if you're planning on buying any of the new Tau stuff you should check out Element Games who offer discounts and use the banner on the right which helps support From The Fang too. Totally optional of course but I appreciate it.

EDIT: I didn't get round to writing the second post like I intended so it'll probably come on tomorrow night (Saturday) instead.
Posted by From The Fang at 17:00:00