Today I'm going to look at the Elites slot. As with the rest of the codex there are a lot of options here but there are some stand-out choices, depending on your play-style of course. 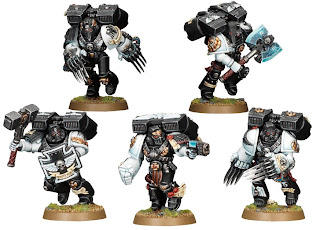 In the previous incarnation of the SM codex, Vanguards could assault from Deep Strike. This changed when 6th edition hit and the rules stated that you couldn't assault from reserve. This rule has now been replaced with ignoring the disordered charge penalty and automatically passing the Glorious Intervention roll. That's pretty crappy to me. Firstly, when was the last time you even remembered to use the Glorious Intervention rule? Not to mention that often a challenge doesn't actually make it into a second round! Disordered Charges aren't that big of a deal either.

The problem is that with the sheer volume of fire some armies can put out, deep striking units struggle to get into combat with many (if any) models left. Let's not forget how many Riptides we see at the moment too! Do you really want to risk what will work out as a pretty expensive unit? Granted they're not that expensive when you compare them to regular assault marines with Ld9 and a extra attack for 5pts each. Alternatively you could pack out a land raider with them and charge something juicy. That's a pricey option though.

They're still die as easily as any other marines so they'll struggle to get many charges off. Perhaps I'm missing something but they just seem like a waste of points. Stunning models mind you. 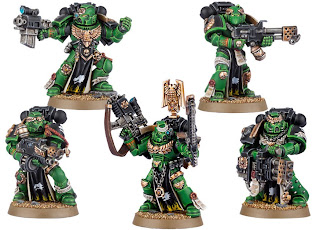 Sternguard are pretty pricey at 22pts each, cheaper than they were though. They fulfil the same role they always have as the providers of special issue shots to deal with problematic enemy units. They'll work best with a drop pod and can take the soon to be popular grav-guns. Not to mention every model can take a combi-grav if you desire, seems a waste of special ammo though.

They'll do their job pretty reliably and will probably make an appearance in many tournament lists. Pedro Kantor allows them to be scoring too which is an interesting prospect. It's a shame that the Imperial Fists chapter tactics don't apply to their special ammo but perhaps they'd be too good then. If they're only firing their boltguns with normal ammo then you should save some points and buy a tactical squad! The tactical doctrine of the Ultramarines will also help them and can be used with their special ammo, if only for one turn. This could make a devastating turn one drop podding sternguard assault pretty potent. 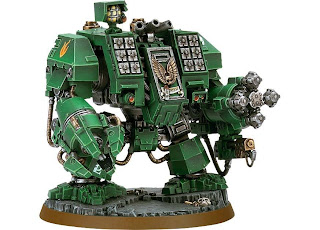 The standard and venerable dreadnoughts suffer the same problems they always have. They either attempt to walk across the field and probably get shot before doing much damage or they drop-pod in get one shot off then probably get shot down. The venerable dreadnought is significantly cheaper than it was mind you and for the BS boost and Venerable rule it feels like an automatic upgrade to me. They're still potent units if they can get into effective range but most of the time they'll struggle.

The ironclad dreadnought is a decent option for 135pts. AV13 got a lot stronger recently thanks to the shift towards infantry spam. A lot of armies traded their S8+ weaponry for anti-infantry firepower. This means the ironclad has a better chance of making it to its target. Factor in the included extra armour and they could be pretty durable. They're far from a bad option but there are probably better ways to spend the points.

As I've said earlier, an Iron Hands army with a MotF and a pile of dreadnoughts might be a lot of fun but will still come unstuck against some armies. I love dreadnoughts though so I'd be keen to give it a go at least once.

Legion of the Damned 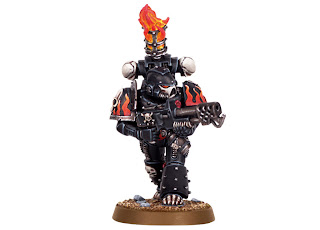 Always a bit of a fluffy choice and pretty expensive for marines. Still they're too pricey for Fearless marines that re-roll the deep strike. Ignores cover applies to all of their weaponry too which means the special and heavy weapons become great vehicle hunters (depending on your view about the Ignores Cover rule and vehicles). Slow and Purposeful allows them to make the most of grav-guns and... oh wait they can't take them. That's a shame.

With their 3++ save and the aforementioned Fearless special rule they'll be great for holding up particularly smashy units. They'll also be pretty tricky to shift with shooting. No more so than normal marines perhaps but Fearless helps. I don't really expect we'll see them all that much as they're not especially good. They're a lot of points to stick in reserve really especially in an army with flyers etc. 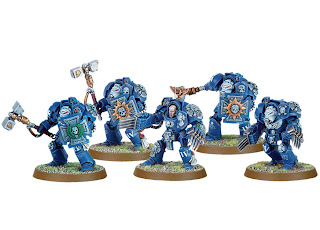 Terminators
At the advent of 6th edition there was a lot of hype about terminators. This was largely due to the fact that power weapons had become AP3 meaning their 2+ saves were more effective. This joy was short lived though as each successive codex release has brought more firepower. The success of any terminator unit effectively comes down to how well you can roll those saves. In this current age of Riptides a-go-go the terminators suffer when arriving by deep strike. Land Raiders are seen as a pretty pricey option these days too.

They're the same price they ever were but TH/SS variants now cost a little more. This is a shame as they're still probably the most viable version of terminators, if only for their survivability against those dreaded Riptide pie-plates. Sadly, despite still being excellent models, they'll be overlooked in favour of other units in their price range. 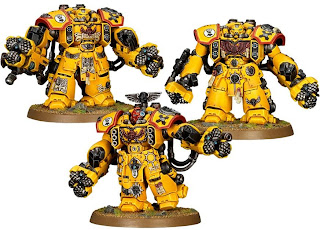 Probably the ugliest models in the book with their siege drills attached to their mittens and of debatable use. At 60pts a piece they really need to do something dramatic. Essentially what you're paying for is their durability. Two T5 wounds with a 2+ save is fairly good but the assault variant of the Centurions feels like a bit of an afterthought. You're probably best swapping the Ironclad Launchers for hurricane bolters as then they'll at least do something as they slowly plod towards combat. Twin-linked flamers would be great if they could deep strike but they can't.

The siege drills may be great against vehicles but I'm not convinced you'll catch them. You could give the sergeant an omniscope and a meltagun but 15pts seems a waste on an already pricey unit. Perhaps I'm being to negative about them but if you did shell out for the Centurion kit you'd be better building the Devastators in my opinion. Maybe my opinion will change but right now I'm not convinced by them at all.

Conclusion
To me the Elites section is probably the most disappointing in the book. You may have got that feeling from my negativity in this post! The clear stand-out unit are the Sternguard. This was probably true in the old book too. I can't see people taking the other options unless they're going for a themed army. What remains to be seen are the possible combinations of some of these units with the Chapter Tactics. Maybe there are some permutations that I've missed that save these units from extinction.

Terminators are a big let-down for me. I really want them to be awesome but they always seem to die too quickly and I'm left thinking about what else I could've had for the points. The vanilla variant has always been the poor cousin to all of the other terminators around and this version of the book doesn't change that. Deathwing are fearless, get split fire and twin-linked on deep strike. Wolf Guard are more flexible and have Counter-attack. Grey Knights terminators are Troops and have a disgusting array of special rules. Blood Angels may be the same points but can be given FNP fairly easily. Again, chapter tactics will have to be the saving grace for vanilla terminators.
Posted by From The Fang at 18:00:00