With effectively 7 codexes worth of Special Characters to get through there's quite a list so I won't be able to cover them all in as much detail as other books. Remember each character has a specific chapter now so, whilst you can combine chapters with the allies system, you'll mostly only see characters from a single chapter. The Ultramarines have 6 of them and frustratingly the Iron Hands don't get one at all so there's a bit of injustice there I think. 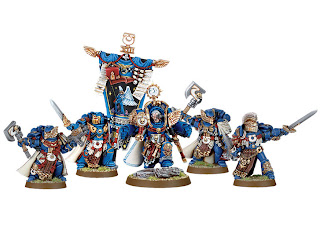 By far the most expensive special character in the book at 285pts with his terminator armour, Marneus needs to contribute a lot to justify the cost. He's got the same statline as a chapter master and artificier armour as standard which accounts for 150 of those points. He's able to roll three times on the traits table but as we've discussed already they're mediocre at best so this isn't much of a boon. He's one of the few characters to get Eternal Warrior though. He's also the only way to get the old school chapter tactics back and choose to fail a morale check and allows you to use one of the combat doctines twice. Otherwise he's geared up to bring down vehicles with his power fists.

I'm not convinced he's worth the hefty price tag. In combat he'll be excellent but he's only got a 4++ save if he meets something chunky in combat like an MC. Still being able to re-roll to hit for two turns with the tactical doctrine could be effective. Personally I doubt we'll see him outside of fluffy lists. 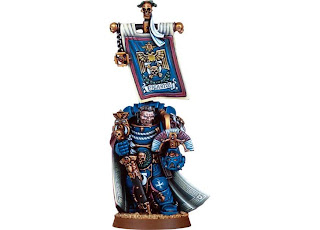 Cato Sicarius is a rare sight in tournament circles and despite a points drop he's unlikely to be making many more appearances. Giving a tactical squad a bonus special rule isn't going to win you many battles and a leadership bubble, whilst useful at times isn't particularly great as it only applies to Ultramarines and not lower Ld allies like Tau or Guard. What we might see him used for is his +1 to reserve rolls especially when combined with a few flyers or expensive deep striking or outflanking death stars. Combine him with Tigurious (see below) and you can all but guarantee you'll get your reserves on turn two. Despite not having Eternal Warrior, Sicarius will be hard to shift thanks to 2+/4++ and 5+ FNP. His Coup de Grace attack could be great against tyranid MCs or daemons as he'll be S7 on the charge with his warlord trait. Still, hitting on 3 and wounding on 2 or 3 followed by an invulnerable save doesn't make it all that likely to work. Worth a thought though. 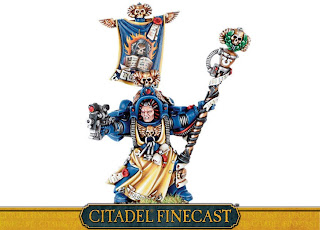 Varro Tigurius has a lot of people excited and for good reason. For his points he's probably the best psyker around. He may only have rulebook powers but with mastery 3 and the ability to re-roll on the charts he has a good chance of getting the powers you want. He's also crucially got access all of the disciplines including the excellent Divination powers. Throw in a psychic hood that allows re-rolls to psychic tests and you're near guaranteed to get your powers off whilst avoiding Perils. The ability to manipulate reserves is much sought after and Tigurius gives you a re-roll to speed up or delay those crucial reserves.

He's not without his issues though. He's not got an invulnerable save and only 3+ armour so he's not all that survivable. Delivery is an issue. He'll be great attached to a squad and handing out powers but depending on what powers you want to use getting him into range might present problems. Finally, his force weapon is a the Rod of Tigurius which is only AP4. With so many multi-wound models out there at the moment an AP3 weapon would have more utility. Still S6 with Master-crafted and Concussive has the potential to make up for it. You only need the target to fail a single save after all. 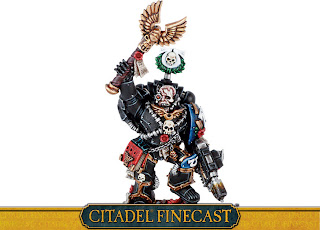 For starters Ortan Cassius has one of the weakest of the warlord traits as causing Fear has very little practical use and frankly gets forgotten a lot. As ever it comes down to what he offers over the standard chaplain for his points. The stand-out bonus is T6 and FNP, trouble is, most of the time he'll be victim of an average toughness of 4 when he's in a unit. Still he's likely to hold something up in a challenge even if he can't kill it that easily with the AP4 crozius. His combi-flamer is a nice addition and poisoned 2+ shots always come in handy. The important point with cassius is that he only costs 40 points more than the standard chaplain. Can't see him being a popular choice but he's probably the cheapest (as Khan will normally have a bike). 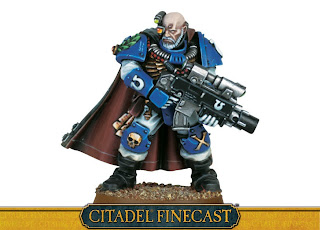 The big news here is that he's Ultramarines only. That move will have upset a lot of SM players who popped him into their scout squads. He's only a 50pt upgrade so a good way to get a cheap character in for Blog Wars but you get a decent amount for your points. BS6 with permanent Precision Shots is nice but he's only got a two shot sniper rifle so you'll just be hoping for those rending 6s. Great to be able to use his BS6 for another weapon in the squad like a missile launcher for example. Interestingly he has both a camo cloak and Stealth which in my opinion gives him +2 to cover saves. Probably worth a go but unlikely to be a star player. 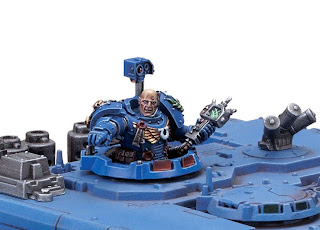 Another 50pt upgrade character but this time for a tank. Unlike Longstrike in the Tau book, Antaro Chronus can hop out of his tank when it blows up. This sounds good but then you have to think he's an extra kill point. Still, giving a tank BS5, ignoring Shaken and Stunned and It Will Not Die will certainly be irritating for your opponent. Often you want a land raider to survive long enough to get its contents into combat and Chronus should help with that. In other vehicles he'll probably make them worth too many points. 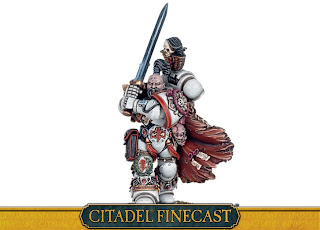 We're finally away from the Ultramarines characters with the first and only White Scars offering. He's probably going to be a pretty common sight based on the early rumblings from the tournament blogs. There's a lot of talk about bike armies and Khan will likely play a big part of that scene. The main thing he offers is Scout but he does also have one of the few decent warlord traits in the shape of Champion of Humanity. His potential to get into a challenge with the enemy warlord and cause instant death means he might win the game for you.

I have doubts over the effectiveness of a biker army. Of course they're very mobile and tricky to handle but they'll need some decent anti-air support to prevent heldrakes from making a right old mess out of them. Still if you are wanting to spam bikes then Khan is the way to go. I'm saddened to see that the SM codex can probably make a more effective biker army than the DA one though. Dark Angels are massively let down by lack of anti-air so perhaps bike fans can find solace in the marine book.

That's half way through the special characters then. Come back tomorrow for the rest.
Posted by From The Fang at 18:00:00