Today I'm going to look at the Troops slot, the core of the army and crucial in the current edition with so many objective missions. This section usually makes or breaks a codex. Remember that bikes can be made into Troops and Sternguard can become scoring. 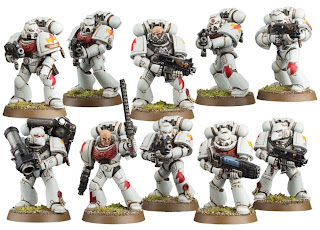 The ever faithful tactical squad is a staple of 40K. The first models most people own are a box of tactical marines. They're decent at everything but not excellent at anything. Still they remain an obligatory choice even 25 years on. Their points cost has been steadily reducing over the years and they're now in line with the Dark Angels prices as expected. They also got the special OR heavy weapon choice that the Dark Angels did. As ever Combat Squads gives you the opportunity to double your scoring units in objective games whilst minimising unit numbers in Purge the Alien.

Like their DA counterparts they got access to flakk missiles but I've spoken before about why I think they're a waste of points. The big news from the new book is access to the excellent grav weaponry (which I'll talk about in more detail when I cover bikes). Otherwise there isn't much to say here. They won't be devastating but they'll do their bit as stoically as ever. 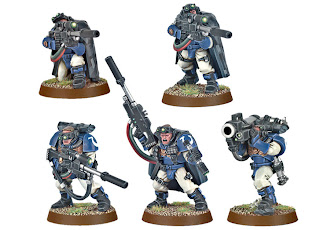 Strangely the SM codex has slightly different points for the Scouts compared to the DA book. Each model is 11pts but a sniper rifle now costs 1pt each. That means sniper teams are the same cost but a slight decrease for regular scouts.

Scouts will still do the same thing they always did, hug objectives for dear life and use their camo cloaks to make themselves irritating to shift. They'll still die in droves to AP4 or better flamers and they'll still fold in combat but they'll often win you the game as they hang onto objectives and get overlooked. What's interesting is the comparison to kroot. They share a lot of the same rules and fulfil a similar role but they're nearly double the points. Sounds bad but they're probably twice as hard to shift as they don't succumb to bolter fire as easily. Like kroot it may be tempting to outflank cheap squads onto objectives but I suspect most will use them as cheap home objective holders.

Crusader Squad
A "new" addition to the codex with the Black Templars merger these guys are only available to a BT general. I can't say I was particularly familiar with the old BT codex but a blob of 20 T4 scoring models for 240pts is interesting. I could see a lot of fun to be had with a Chaplain thrown in and the rest of the squad tooled up for a bit of slice and dice. The alternative is to throw in an Emperor's Champion to make the unit Fearless and go hunting for Challenges. A 15-man squad with a character in an aptly named Land Raider Crusader might be a lot of fun even if it's a lot of points too.

Ultimately the decision is more about whether or not you want to take Templars at all rather than whether crusader squads are worth it. If you are taking templars then by all means swap your tacticals for Crusader units but they certainly aren't worth choosing the chapter for. 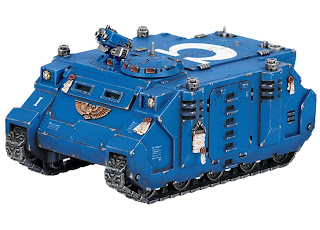 The rhino was a familiar sight in 5th edition but I can't actually remember the last time I played against one at a 6th edition tournament. I wouldn't be surprised if this new codex starts a bit of a resurgence though. Being able to fire that grav-gun out of the top hatch is tempting and at 35pts they're still disgustingly cheap as transports go. They may not be all that difficult to shift but in a mech heavy Iron Hands force they could prove to be an irritation. Similarly Razorbacks are nothing stellar but are hardly pricey, the points have shifted around a bit like they did for the Dark Angels but otherwise they're what you know and perhaps love.

I can actually see Drop Pods making a bit of a come back. Of course the Tau codex and it's Interceptor shenanigans might throw a spanner in the works but Ultramarines with that first turn twin-linked volley from tactical squads are certainly worth considering. Sternguard should remain popular too and a Kantor pod list might make an appearance here and there.

Land speeders are pretty much a joke thanks to the hull points system combined with AV10 but fans of scouts might still consider them for the jamming beacon and Blind from the launcher. Great way of delivering a scoring unit in an otherwise slow foot-slogging force.

Conclusion
Nothing particularly new here. Obviously Crusader Squads are making their first appearance but they're largely similar to the BT book. Both tactical squads and scouts will get plenty of use in armies that haven't manipulated the FOC. Neither unit is going to shine but they'll do their job as reliably as ever. The humble space marine might not be the fearsome foe it once was but they're still better than most of the troops offered by the xenos forces. The tactical squads also make a bit of a mockery of their supposedly tougher CSM counterparts thanks mostly to ATSKNF.
Posted by From The Fang at 18:00:00