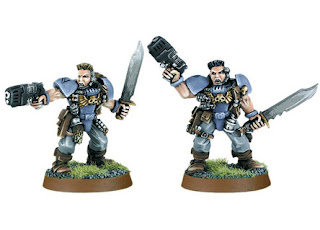 Both units have a good shot at contesting objectives too but the land speeder's ability to cover ground makes it better in this situation.
Final Thoughts
This has turned into quite a wall of text so I best draw to a close. As I've said before the units you take are dictated by the way you like to play. Both of these units complement an army which assaults or one that sits and shoots. As I mentioned in my list building post they're the kind of units which distract your enemy. They mean that your opponent will see them on your list and play differently because they're there. If they've got any sense they'll space out their tanks and in the case of the scouts they'll probably try and keep them away from the table edge. This means you're more likely to be in range with your long fangs which is good.
At the end of the day both units have their advantages and both can easily slide into to your army. I like both of them for different reasons. Your list will be a lot more potent with at least one of them involved. It's also worth thinking about what you could do with the spare 65 points you'd save by taking a speeder instead of scouts. Either way these units are a bit of a glasshammer. They might do a lot of damage but they won't last long after that.
The important thing to remember though is to try them for yourself and not rely on what I say (or anyone else says). If they don't suit you then don't use them but I'm not going to say either is pointless. We probably all have a set of scouts since I suspect most of us who've only recently got into SW bought the Battleforce so give them a go!
Posted by From The Fang at 10:48:00