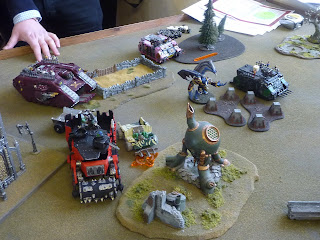 Full of confidence from our first fight we moved across the room to thoroughly nice guys playing a list of Orks and Chaos. This mission would be Pitched Battle deployment and Take & Hold which involves having a scoring unit in the centre of the board and no enemy units in range. There would be 1 point for holding the centre uncontested, 3 for holding it with nothing within 6" and the full 5 for nothing else within 12". The middle of the table was certainly going to be soaked in blood by the end of this round!
750pts of Chaos
Daemon Prince (Mark of Tzeentch, Wings)
3 Terminators (Chain fist, Combi-melta x2, Heavy flamer)
Land Raider
Chaos Space Marines w/ Rhino (Havoc launcher)
750pts of Orks
Big Mek (Kustom force field)
18x Boyz (2x Big shoota) + Nob w/ Power klaw
11x Boyz + Nob w/ Power klaw, Trukk
10x Boyz + Nob w/ Power klaw
11x Boyz + Nob w/ Big choppa, Trukk
Report
We won the roll off and deployed the Blood Angels in the centre of our deployment zone with a rhino on each flank and the long fangs on the right between the jump packs and the rhino with their razorback close by. They put one of the boyz squads in the Land Raider and the rest were in trukks. The 19 man squad went in the battle wagon with the Big Mek. These were clustered around the centre of their deployment zone. The daemon prince and the two rhinos went on their left. The terminators were in reserve. 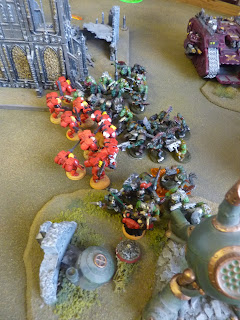 We advanced our force towards the centre. The long fangs and razorback stunned one of the rhinos and scored a couple of wounds on the daemon prince. They brought all of their ork vehicles towards the centre but in doing so they forced their land raider to move through difficult terrain causing it to become immobile. One of the rhinos advanced forward towards our lines.

The blood angels advanced and used their meltaguns to blow up the battle wagon killing some of the orks inside. The rune priest on the left then lined up a Jaws attack which claimed the nob with power klaw and two of the boyz. The Mek just managed to avoid falling into the abyss. Matt then charged in killing off most of the squad. The long fangs fired at the rhino immobilising it. 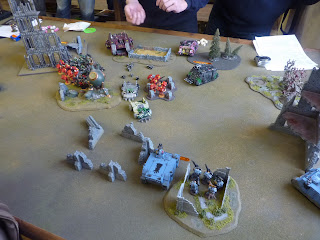 All of the orks piled out of their transports and charged into combat with the Blood Angels. Their trukks moved off to screen the fire of the long fangs (since they were using the old trukk models they had little effect). What followed was a long and bloody conflict that claimed the lives of all of the orks and a large chunk of the sons of Sanguinius too. Meanwhile the Spaces wolves had disembarked from their rhino and with help from the other grey hunters, were able to dispatch the terminators that dropped in behind our lines. The other squad of blood angels attempted to demech one of the CSM squads but their melta missed and they ended up giving a cover save to the rhino hampering the long fangs attempts. Eventually Mephiston cracked the transport and killed off the occupants.

The remaining squad of CSM proved to be a thorn in our side. We had similar problems demeching them and when we did they moved into area cover. The blood angels charged in to kill them off but with the game ending at turn 4 due to time constraints a sole marine held on to be in 12" of the centering. We claimed 3 battle points but were unlucky not to get the 5th. 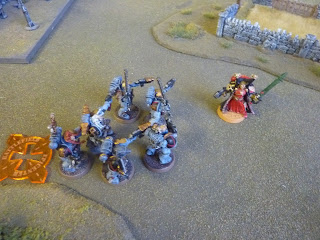 Final Result In a similar story to the first battle a sole marine made the difference. We claimed 3 points for the objective and a further 3 for killing 750pts more than they did. A nice game total of 6 bringing our overall score to 10.

Conclusion
With the speed in which we dealt with the ork army we were confident we could deal with the CSM and then clean up to give us either the full 5 points or perhaps even table them. Mephiston was deadly yet again and the Grey Hunters fulfilled their support role well. The long fangs struggled to get many kills because of the sheer number of models on the table blocking their sight.

The key problem was our inability to destroy the Chaos transports. The land raider never really harmed us but the rhinos meant we had trouble dealing with the CSM inside.

However, what is for certain is that had there been time for a 5th turn we'd have finished off that pesky marine and claimed a full 5. Who knows we might have even been able to kill everything off. Less time talking more time rolling is the lesson here I reckon!
Posted by From The Fang at 11:04:00