By popular demand (and to satisfy my own curiosity), I've run the numbers for the presence of Lords of War at BW9. Let's remind ourselves that there were 16 different Lords of War that were permitted at Blog Wars 9 from the following list:

I wasn't expecting some of them to show up like Gabriel Seth or the Avatar but it's a shame there's no Logan or Draigo. Anyway, this is the first time that Lords of War have been legal at Blog Wars (or rather Super Heavies in 6th edition). With two detachments you could potentially field two different Lords of War but of course you'd have to satisfy the compulsory requirements of those detachments first so it was unlikely. The exception being Imperial Knights who could have theoretically appeared a maximum of five times in a single list. Here's a pie chart for how many LoW people are fielding: 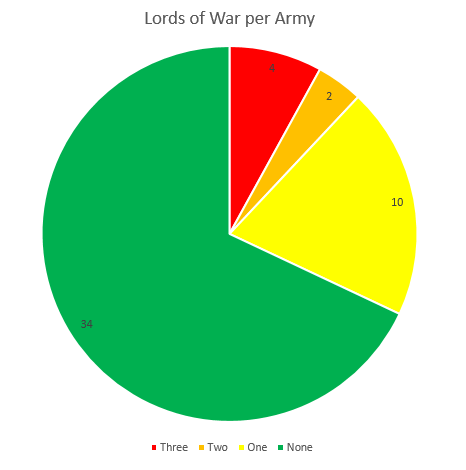 As you can see just over two thirds of the lists don't have any kind of Lord of War at all. So it's quite feasible the majority of you won't face one during your three games. Obviously all four lists with three Lords of War are Imperial Knights lists. There are two lists with two different Lords of War and the remaining 10 have a single LoW. Interestingly no-one is bringing two IKs. Here's a breakdown of the individual Lords of War that are present: 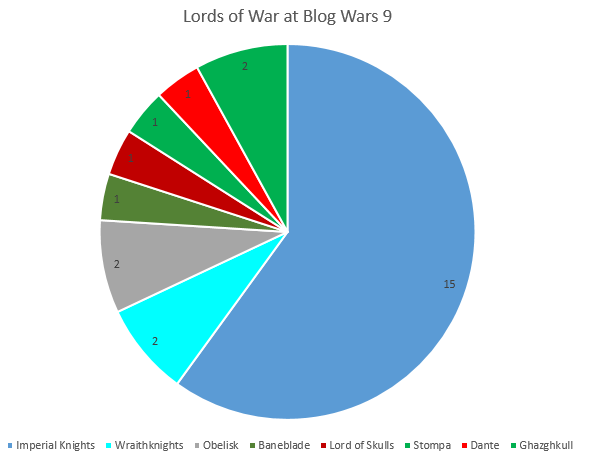 As you might expect the biggest chunk is taken up by Imperial Knights. This chart deliberately doesn't give away what the combinations are in the two LoW lists though. I'm pleased that there's a good variety of super heavies in play. I'm particularly happy that there'll be a Lord of Skulls and Baneblade in action as they'll add some flavour. It's interesting that only two players have chosen to bring Wraithknights. Perhaps it's a shame thing and no-one else dared?!

It'll be interesting to see how well all of the Lords of War fair. I'll try to give a breakdown of things after the event so people can see how they got on. Of course a three game event isn't really a fair test but it'll be useful for helping me decide if they're going to be a permanent feature at Blog Wars events.
Posted by From The Fang at 17:00:00