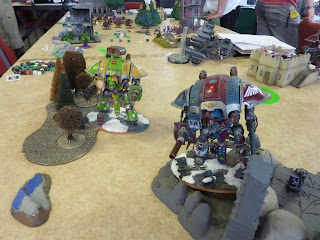 The inclusion of Imperial Knights is easily the most contentious issue amongst the comments on the BW9 Aftermath post. At BW8 players were allowed to take upto 2 IKs (there were actually only two lists with a single IK, no-one ran 2). For BW9 I upped the limited to 3 but only four players took me up on it. With a further 3 players taking a single knight the total present was 15.

Generally speaking it seems that the majority of people who played against 3 IK in one or more of their games struggled and didn't enjoy the experience. There are notable exceptions to this, for example, Peter Barrett's Necrons hammering Dave Halfpenny's IK/DA force. Clearly then they aren't unstoppable. The Baronial Court is another matter though, giving the knights 3++ on their front facing and a WS/BS bonus to one knight is a big deal. I stated before the event that it isn't as bad as the Adamantine Lance formation but clearly it's still too powerful. Gerantius is another bone of contention and I think it's sensible to restrict his use. The Household Detachment on the other hand seems pretty reasonable. I could easily limit IKs to the Household or Oathsworn detachments and say that an IK detachment/formation can't be your Primary Detachment. This would only the Objective Secured bonus would apply and not the BS/WS or re-roll warlord trait (obviously since Warlord has to be in Primary).

Anyway, let's look at the results table again with an extra column showing who had Lords of War: 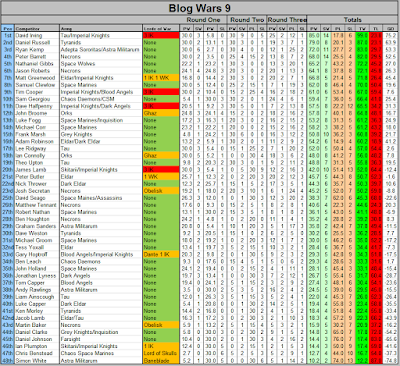 Please note I've deleted Stu Dickson from this list as we were sharing the games so there was a Stompa in one of the three games but not the others. So all the 3 IK lists placed in the top half of the table but they're certainly not clustered tightly at the top. Of course, it's difficult to draw any real conclusions after just 3 games. There's still too much of a "luck of the draw" element as to who they ended up playing. Generally speaking the lists with at least one Lord of War are spread quite evenly through the table. This makes me reluctant to ban them completely.

What I'd propose then is that Super Heavies OR Gargantuan Creatures are 0-1 per army. So you can take a single SH or GC but not both. You could still take the infantry Lords of War like Marneus, Draigo, Ghaz, etc and they could be joined by a Super Heavy if you wanted. The only issue I see with this is that a single IK isn't much good on it's own. Obviously it depends what's in the list with it but I think it perhaps penalises that codex too much. What I'd suggest then is that Imperial Knights are 0-2 per army. They should still be tough to deal with but without it feeling impossible. Of course there'll be lists that can't cope but that goes for other things too. This also has the added benefit of preventing the Formations being used. In fact, only the Oathsworn detachment would be legal.


Your Feedback
I could easily ramble on for ages in this post about the various issues surrounding Imperial Knights but I'd rather hear from you guys. I'd particularly like to hear your thoughts on the proposed changes above.
Posted by From The Fang at 17:00:00