Magnetising the Imperial Knight Warden Kit for All Weapon Combos 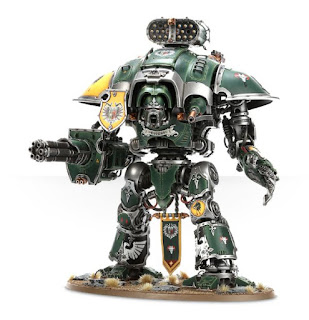 I've since magnetised two more knights and improved on some of the techniques listed here. I strongly recommend reading both posts before starting yours.

Let's take a break from the Blog Wars feedback and look at some actual hobby I've managed to achieve over the last week. I don't get a lot of hobby time and this is my first big magnetisation project so it's taken me a while to get everything how I want it. If and when I buy more Knights I'm sure they'll go together A LOT quicker. Apologies for this guide being pretty long. You can get the basic idea from the pictures but I wanted a reference for myself as much as anything else.

Before I started I watched the GW assembly video, a couple of YouTube magnetisation videos and a few blog posts. Some of them don't have the level of magnetisation I want and I couldn't find any of them that cover the extra weapons so I thought I should post about them. I may have done things differently to others but I'm happy to hear suggestions for things I could've done better.


Here's a few notes before you get started. Apologies if they're patronising but they're things I've picked up in the process of doing this:


Waist Joint
I've taken a cunning idea from LordHalfpenny over on Weemen and glued a piece of sprue to the top of the legs. I went a step further though as I wanted to be able to separate the legs from the torso for transport. Firstly, I filed down the peg on top of the legs to make the eventual joint tighter for better stability. I then glued on the sprue. 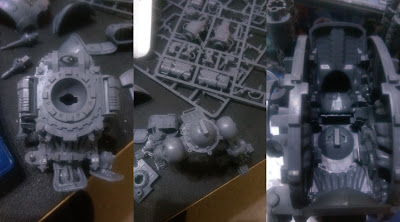 To make the legs removable I cut a piece out of each side of the hole to allow the piece of sprue to slot through and then turn 90 degrees to lock in place. Of course, you could use a large disk magnet but I thought this made for a pretty neat solution without the need for a magnet. If it proves not to be stable enough or easily broken then I may end up reverting to a magnet anyway.

Heavy Stubber/Meltagun
This is a new swap for the Warden kit but a useful one. You actually get nearly everything for both guns but the way the joint to the body is made you can't swap them without magnets. 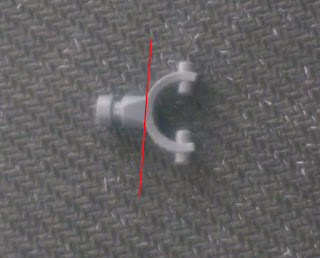 I simply trimmed off the top of the weapon holder, attached a 3 x 1 mm disc magnet to the bottom of this off-cut and glued it in place (I originally tried this with a 2 mm magnet but it wasn't strong enough). I glued it onto the body as the magnet will allow for rotation. 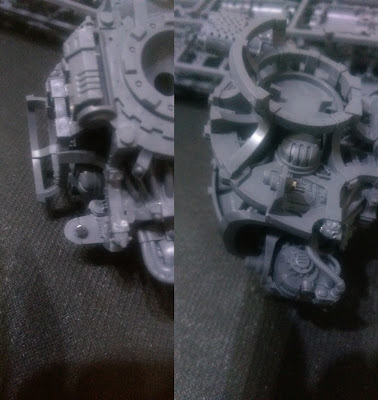 I then glued the clip into place on each weapon as there's too much movement if you don't. I then added another 3 x 1 mm disc magnet on top of each weapon. Sadly the weapon didn't end up perfectly central when the top carapace is in place but it's not far off and when I make subsequent knights it'll be done better. 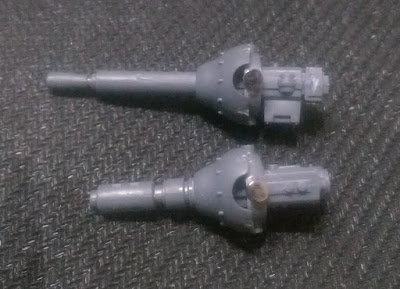 Carapace Weapons
The autocannons and missile launcher get separate mounts so they can be fully assembled (apart from the front panel of the missile launcher). This was a pretty good fit for me so I just added a 2 x 1 mm magnet to the top by carefully drilling out a 2 mm hole in both panels right at the top of the groove in the back. I then did the same in the solid bit at the top of the launcher itself. Incidentally, if anyone has bought a Warden kit that they're assembling as Imperial aligned would they be prepared to send me the Mechanicum cogs (part A61) so I can add one to both fronts of the missile launcher? I'll cover postage of course and I'm happy to send you the eagle heads (part #129) in return. 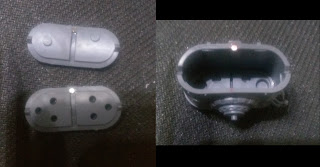 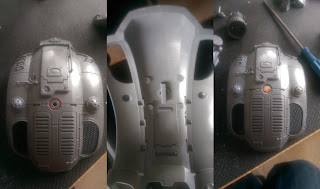 To attach the weapons I drilled out the hole in the top of the carapace (circled red) to 5 mm diameter, added a piece of sprue across the hole then glued a 5 x 1 mm disc magnet to it with a small amount of green stuff to try and neaten up the hole. It's worth noting that I (very carefully) used my power drill to make the 5 mm hole as that drillbit doesn't fit in my hobby drill. 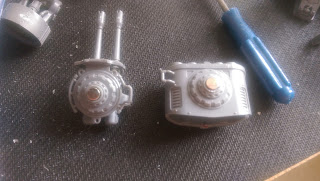 Arms
Since you only get two "shoulders" in the entire kit you need to magnetise the weapons at the "elbow". This allows for lateral movement too. To do this you need to trim off the bottom of the cylinder piece on each shoulder as shown. You can then insert this into the shoulder itself. I drilled 5 mm holes into the bottom of each cylinder and sank a 5 x 1 mm in to a depth of 1 mm. This will allow me to simply glue the magnets on top of the weapons and they'll end up recessed when joined together. 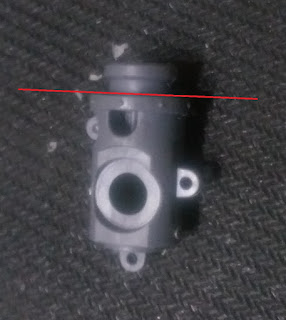 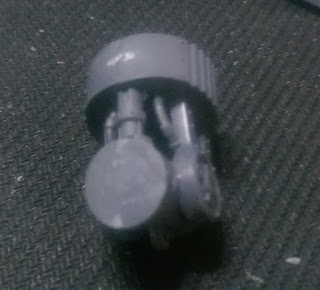 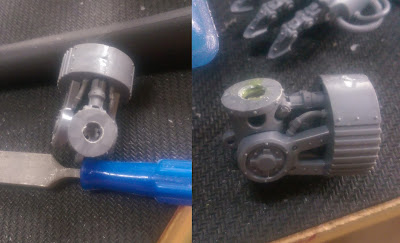 Reaper Chainsword/Thunderstrike Gauntlet
In order to make the Knight Gallant you need to be able to attach the sword to the right arm but to the left arm for all the other variants. The fist can only be left handed unfortunately. Magnetising at the elbow makes this easy. You get enough elbow pieces for both of the melee weapons so they can be fully assembled before packing the hole in the top of each mount with sprue off-cuts and then green stuff. 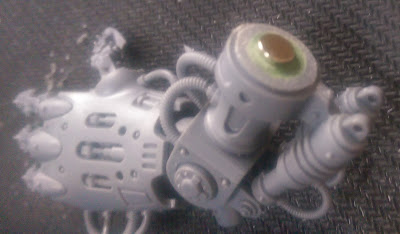 Once dry, file the top surface down and test fit it with BOTH shoulders to make sure it will sit flush, filing down as necessary. Then glue a magnet into the centre of the green stuff.

Avenger Gatling Cannon
The Gatling Cannon gets a separate mounting from the other two ranged weapons so it can be fully assembled and magnetised in a similar way to the melee weapons. I glued my pistons into place as I didn't want too many articulations and therefore a loss of stability. No one wants a floppy gun after all! 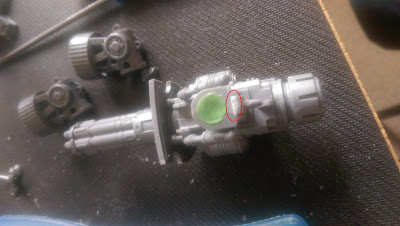 It's worth noting here that the part circled in red needs trimming back a bit so the gun can fit snugly onto the shoulder piece. It's the same for the thermal/battle cannon mount. Speaking of which...

Thermal Cannon/Rapid Fire Battle Cannon
This part is easily the most complicated part of the model to magnetise. The problem is that they both share the same mounting so you need to magnetise several different parts to give you the two guns. Fortunately there aren't any variants that require both of these two weapons to be fitted. Both Weemen and Jamie's blog offer guides for doing this and I've borrowed parts from both to make my version.

First thing to say is DON'T put the two halves of the weapon casing together until you've done the magnetisation work for the hoppers. Start by trimming the pipe from the battle cannon ammo case. I'm going to use the thermal cannon piece in the back of the gun and the pipe attached to that. I could magnetise the pipes but I'd end up losing them and I doubt anyone will ever notice that the pipe isn't quite right on the battle cannon. I then magnetised the ammo hoppers for the thermal and battle cannons with a magnet in the side of the main housing (sunk to a depth of 1 mm) and a magnet in each of the hoppers. The battle cannon hopper needed packing with sprue off-cuts before the magnet could be positioned with green stuff. The thermal cannon hopper gets the pipe glued into place. 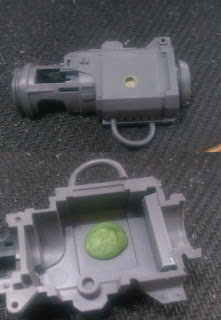 The ammo hopper for the heavy stubber on the battle cannon needs to be magnetised as it gets in the way of the thermal cannon front. I drilled a 3 mm hole in the side of the main gun housing and then applied some greenstuff to the back and pushed in a magnet. I then did a similar thing to the inside of the hopper itself.

For the gun fronts I regretted cutting out the piece of sprue from the hole in each shield as this would've made a perfect place for a magnet. The battle cannon needed a piece of sprue putting back in and the thermal cannon got some green stuff. The main gun housing got a piece of sprue glued into each side before the two halves were put together (not forgetting the arm in the top and tank in the back). 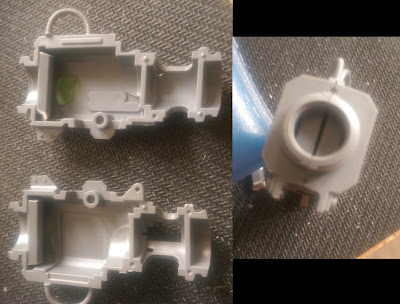 Conclusion
I'm, generally speaking, pretty satisfied with my first proper magnetisation efforts. I've previously magnetised a predator and things but this is a much bigger undertaking! I've learned quite a lot of minor things from doing this that will make a big difference to how long it takes me to magnetise my next couple of knights. Here's a few shots showing off the combinations:

I'll post again once I start making the base and painting the kit up. Oh, and yes I can appreciate the irony of discussing how overpowered these are and limiting their use at Blog Wars, only to post up my plans for an army of them! However, I wanted an army with a low model count that I could really go to town on from a painting perspective and find easy to use on the tabletop. Imperial Knights seemed like the obvious choice since they're beautiful kits that lend themselves well to airbrush work and can also be allied into my other armies pretty easily. There's also the possibility of some AdMech stuff to go with them in the future.

I've since magnetised two more knights and improved on some of the techniques listed here. I strongly recommend reading both posts before starting yours.
Posted by From The Fang at 22:03:00