I'm in the process of counting up the Lord of War/Super Heavies that are coming to BW9 but I haven't done yet so you'll have to wait a bit longer for more pie. In the meantime I had some packages arrive today which contained the prizes for the event. Of course the tournament itself has prizes of Element Games store credit (which are generously sponsored by Element Games). Whilst I'm on the subject, it might be a good time to place an order with them so they can have it for you on the day and you can save yourself some postage.

Anyway, here's what you can win for the raffle and spot prizes on the day: 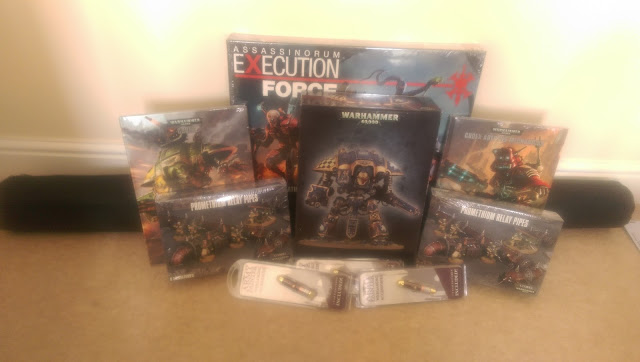 Sorry for the poor photo but here's a list of what's on offer:
I think you'll agree that's a pretty impressive stack of prizes right there! Remember entry into the raffle is included in your ticket so you're guaranteed to be in with a chance of winning something here. Since there are 7 prizes and 49 players (I'm not in the raffle - obviously), that's a 1/7 chance of winning something worth more than your ticket cost you!

The laser pointers will be given out a spot prizes for particular feats during each round. I'm also incredibly excited to announce that I also received the round prizes today: 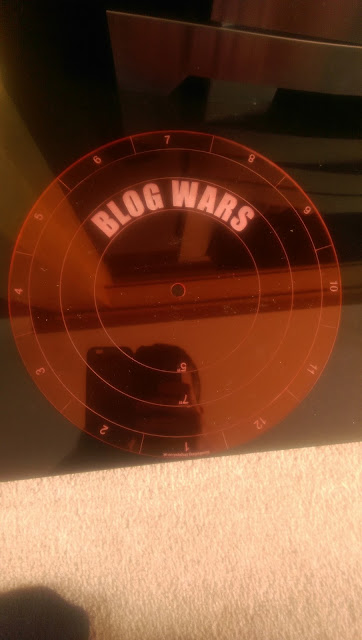 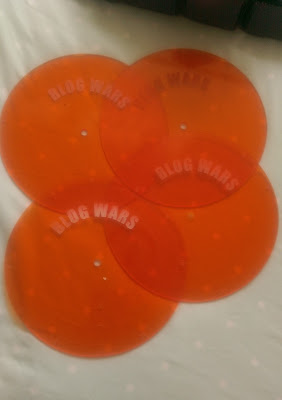 It may not be clear from the pictures but these are custom made 10" Apocalyptic Blast templates with the 5" and 7" rings marked on them. I'd been trying to track down a 10" template for my Stompa (when it inevitably explodes) and since GW seem to have discontinued there's a trawled the interwebs in search of a suitable alternative. I stumbled across Foundations of War on eBay selling some other templates and contacted them to see if they'd be prepared to make me some.

I'd like to thank Tim from Foundations of War for doing such an excellent job on them. He's even etched the blog address into them without me mentioning it! I was worried they wouldn't arrive in time but Tim turned them around really quickly. I'd recommend getting in touch with him if you fancy some custom templates of your own. One of these will be given out in each round but you'll have to wait until the day itself to find out how you can win one. I'll be keeping the fourth one for myself I'm afraid!

Still to come is the post with the Lords of War pie charts and some shots of my Orks if I ever get them even close to finished! I hope you're looking forward to the event as much as I am!
Posted by From The Fang at 14:21:00