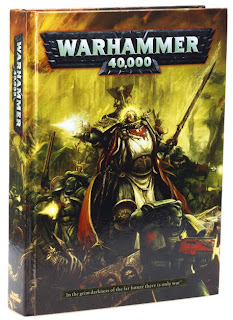 Just over a year ago I was down at Warhammer World for a doubles tournament on the weekend 6th edition was released. We'd managed to persuade our FLGS to give us our rulebooks on the Friday and had been frantically swotting up on the rules. The doubles event was the last of 5th edition but they were also running a 500pt event on the Saturday night as the first tournament of the new rules. I learned three valuable lessons about 6th even in that first tournament. Firstly that flyers would be a problem (a stormtalon pretty much killed my whole army), assault units would struggle (orks never got close as I kept killing the front models) and Matt is incapable of writing a fun, friendly list (he took two dreadnoughts, two razorbacks and Coteaz at 500pts and won the event).

A lot has changed in 40K over the last 12 months so I thought it'd be good to look back over what's changed to try and give us some idea of what to expect over the next year.

The End of 5th Edition

Towards the end of 5th edition we'd had Grey Knights, Dark Eldar and Necrons. Each book had taught us different things. Grey Knights were spamming AV11 hulls, S6 firepower and S8 dreadnoughts. Dark Eldar were all about poisoned fire and darklight weaponry. Finally, Necrons gave us a glimpse of what was to come from 6th edition (since Matt Ward wrote the codex shortly before the 6th ed. book). Necrons were pretty strong in late 5th edition but nothing could quite prepare us for what would change when flyers got their proper rules.

There's no doubt that 5th edition was about mech. If your army couldn't deal with several rhinos or chimeras then you may as well go home. They were simply everywhere. This meant there were a lot of krak missiles and meltaguns around. Despite being an older codex (in comparison), Space Wolves could still hold their own with their ability to take low cost missile launchers in droves and special weapons on the cheap. The "flyers" of 5th edition were played as fast skimmers and were no more difficult to deal with than any other vehicle. For this reason they weren't really getting a lot of use outside of vendettas.

The Dawn of a New Age
The first thing that people noticed in the new rules was that flyers were going to be big. Once you hit them they were no harder to kill than other vehicles but hitting them at all was the issue. In those early days your only options were a guad-gun/Icarus lascannon, a hydra (which couldn't hit ground targets very easily) or flyers of your own. In those early days they were ruling the skies and everything else for that matter.

Flyers weren't the only thing. Hull points had weakened vehicles and transports weren't as effective as you could no longer charge from a stationary rhino nor get out of a vehicle that'd moved at Cruising Speed. It was more difficult to charge too. You could potentially charge further but with Overwatch and the new wound allocation there's no doubt it was now more difficult.  Oh and once you made it into combat your power swords would be no help against terminators.

Some units had been rendered near useless by changes to the reserve rules. Gone were wolf scouts, genestealers, webway portals and the like. On the face of it the new edition hadn't changed a lot of the core rules but those little changes had far reaching implications.

Psychic powers had changed significantly but in those early days there weren't many who'd thought about the effect this would have. Most had discovered Prescience but otherwise the new powers didn't seem impressive.

The allies system, whilst screwing some (by which I mean Tyranids of course) would change the way we wrote army lists for good (but not necessarily for the best).

There were actually far too many subtle changes to discuss here. Changes to wound allocation, FNP, Furious Charge, Fleet, power weapons (if it looks like an axe it's an axe), etc to name just a few. Armies that could hold their own in 5th would now struggle in the new rule set. There weren't many lists that could perform well without an overhaul.

Move with the Meta
Every forum and blog was proclaiming that transports were dead and infantry were the new kings of the table-top. Before we'd even got a new codex people were shelving their rhinos and foot-slogging their way to victory. Dark Eldar were proclaimed useless (which I still dispute) as their low AV, low hull point vehicles would apparently be useless in this era of infantry spam. 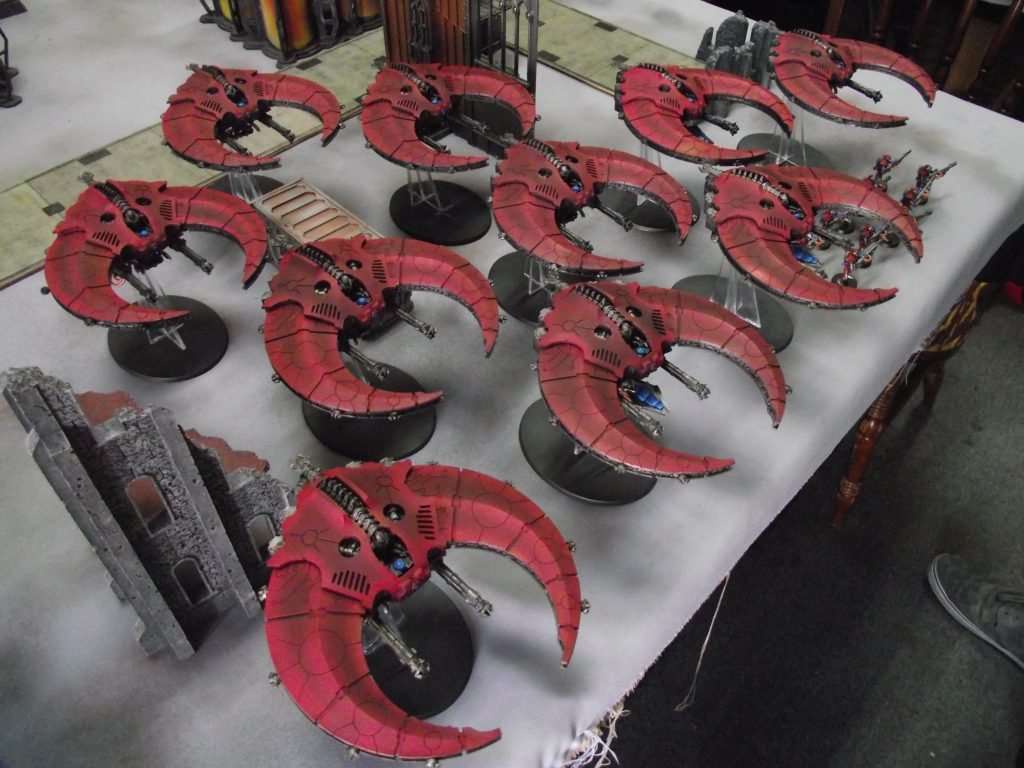 The undisputed kings of this new meta were Necrons. Whilst IG could take a few vendettas, Necrons could take 4+ flyers at sub-2K without hampering the rest of the army. Having annihilation barges, flyers and wraiths in varying quantity was a sure fire recipe for success.

Elsewhere, other armies were ditching their meltaguns in favour of plasma which had more hope of dealing with the widely proclaimed dominance of 2+ armour (again which I dispute). The new rules were already changing the way we play. Dealing with flyers was a major factor in list building but it was still reasonable to ignore them and hope you didn't meet them in great numbers.

When rumours of codex release schedules came out there was a resounding chorus of "there's no way they'll release so many in such a short time". Within the space of a year, however, we've been treated to Chaos Space Marines, Dark Angels, Daemons, Tau and Eldar with probably a couple more before the year is out.

Each codex seems to have brought with it a game changing unit (with the possible exception of Dark Angels). The Heldrake changed the way we think about flyers, gone were the short-lived days where we could ignore them. A flyer that could deal with troops with ease was something you had to pay attention too. I still think about them when writing lists now. Dark Angels heralded lists that could put out a formidable amount of anti-infantry firepower.

The Daemons codex, much maligned by most, highlighted just what flying monstrous creatures could do in numbers. Not to mention taking them as allies with CSM to bring a couple of heldrakes to the party.

If Dark Angels had been able to spam anti-infantry fire thanks to the banner, Tau took it to a whole new level. Not only can fire warriors spew out a disgusting amount of S5 firepower but broadsides were now churning out S7 in abundance. However, for me, the key thing with the Tau codex is the use of interceptor, especially from riptides and broadsides. Armies that rely on their reserves to disrupt gunlines would now struggle and flyers could be taken out before they opened fire.

What Eldar will do to the meta remains to be seen but I predict they'll shift the meta back in a 5th edition style direction with vehicles seeing dominance again. Can your current list deal with several AV12 vehicles with both mobility and firepower? Not to mention they're able to bring S6 firepower in great volume (not that they couldn't before but it's now BS4).

So What is the Current Meta?
I'm not sure their is one to be honest. We've had so many new books that the meta hasn't really being able to stabilise long enough to plan an army around it. By the time you've bought, assembled and painted those models the meta will have shifted and you'll be buying more. Great for Games Workshop but a nightmare to write a list around.

However, we might actually be getting a couple of months off. Apocalypse may have some units that can be used in regular games of 40K but I can't see it really changing things that much .We've then got until September before we're rumoured to see Space Marines. That means at least 2 or 3 months of semi-stability.

During that time I'd expect Eldar to show what they can do. With many still of the belief that the codex is weak (seriously?!) there'll be some harsh lessons to be learned. Tau have the flexibility to deal with most things but mono-build armies will start to show their age I think.

The Future
The Iyanden supplement may not have changed a lot for Eldar players but it does open up an interesting range of possibilities. For fluff players it will be excellent to see some themed armies based around a supplement but in tournament play I'd expect players to pick, choose and abuse. Still it'll be nice to see some of the other chapters getting a look-in from the SM codex.

The format for the new books seems to be 104-page codex, new flyer, new big thing, couple of re-done plastics, a new finecast HQ, new plastic character and psychic cards where appropriate. It's difficult to see how they could fit all of the SM chapters into 104 pages without doing supplements. Each codex doesn't bring about the massive changes we've seen from the likes of Dark Eldar and Necrons but at least there's a chance each army will be updated before 7th edition (if there's going to be one any time soon).

Hopefully the meta will stabilize a little over the coming months but I predict that we'll make a bit of a shift back to mech and flyers won't be as dominant with so many options to deal with them now. That's something that's really changed with the new books, every army (except Tyranids) has either got their own anti-air an ally with some.

I can't say I'm especially excited about the new SM codex but the prospect of new Tyranids, Orks and IG is certainly interesting. I wonder how updated books for Orks and Tyranids will allow traditionally assaulty armies to function in this era of shooty dominance.

On a personal note, whilst I did pick up the Eldar book I've not managed to persuade myself to pick up any models. I don't really want to fork out for a new army and I know that if I started with Eldar I'd want a jetbike list, mech list and wraith list which won't come cheap. I may, however, consider a small allied detachment to join my DE and inject some life back into them. In the meantime I'm going to focus on getting my existing armies painted up, my scenery sorted and maybe stockpile some Orks....
Posted by From The Fang at 17:00:00