Summer of Scenery - Part One: Barricades

Earlier in the year I was inspired by Siph over at Weemen to get my scenery painted up. Unfortunately the Tau codex came out right around that time and all enthusiasm for painting scenery was lost whilst I painted up my Tau for Blog Wars 5 (tickets for BW6 are on sale now - dunno if I mentioned it!). Well with the exception of my piranhas (coming soon) my Tau army is painted up to a decent standard. That means I've got no excuse not to get my scenery sorted.

I did make some progress before Tau arrived in that I got some of my scenery based up and sprayed black but that's where it stopped. However, last night I found my mojo again and set to painting up a couple of barricades. 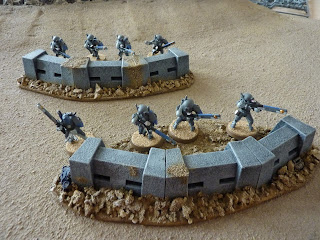 Nothing particularly special but I'm happy with them nonetheless. I wanted them to look like they'd been there for centuries. Looking at them now I'm tempted to carve into them a bit to make them look a bit more battle damaged. Still at least for now they're painted up and that's the main thing. Here's a couple of other shots showing the bits of debris littered around them. 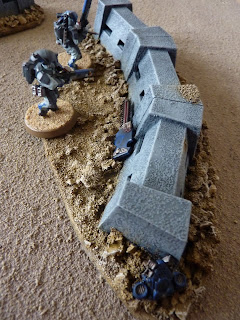 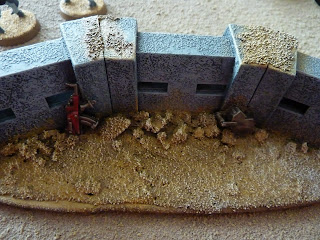 As always with scenery you can get a ton done really quickly since you aren't too worried about the little details and most of it is just drybrushing. I'd estimate that painting these took no longer than an hour. So that means I now have three citadel woods and these barricades painted up. That leaves the following:


Most of that stuff is sprayed black and ready to be painted. I'm also going to look at adding some tufts of grass to them once they're all done as well as some other bits of scenery. At some point I also want to repaint my home-made Realm of Battle board as it's looking a bit tired.

Once all that stuff is painted up I'm going to look at making some other scenery pieces from various bits I have around. In particular I'd like to make some rocky outcrops, industrial things and maybe some faction themed stuff.
Posted by From The Fang at 17:00:00