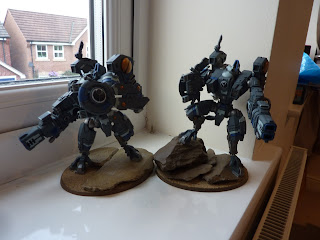 It's no secret that Matt and I love doubles. We regularly attend the WHW event (which is getting ludicrously expensive now), mainly because it's pretty much the only doubles event that gets decent numbers. We've tried to attend independents before but they often get cancelled due to lack of interest. Anyway, here's the list we'll be using:

Basically, as per usual, we can't resist taking lots of big things in a list and very little else! There's plenty of firepower from the wave serpents, riptide and wraithknight. If we play an army that relies on reserves they'll be pretty screwed and if not the markerlights will help the riptides hit accurately. Essentially everything but the big stuff is filler to be honest! 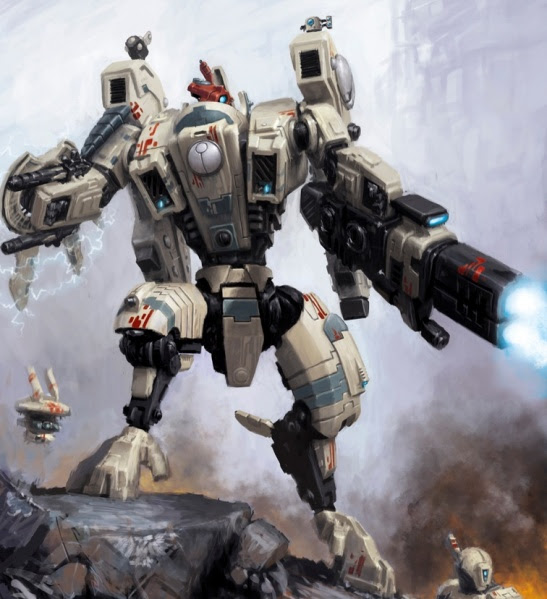 Anyway, I only had one riptide this time last week so I've had to build and paint one. I was aiming to recreate the pose from the codex art that you can see on the right. I don't think I've done a bad job to be honest. The legs are pretty much spot on. Sadly I couldn't get the gun to point outwards as much and the head to tilt down as much. Perhaps if I hadn't been under pressure I might've spent more time but ultimately I needed to get him done. Either way I think the pair of them look great. I'll come back to them at some point and tidy up the joins, line highlight and base them properly but for tabletop I'm happy.

If we meet the right lists tomorrow we could do alright I reckon. Obviously it has it's weaknesses but some lists will really struggle against us. Wish us luck! 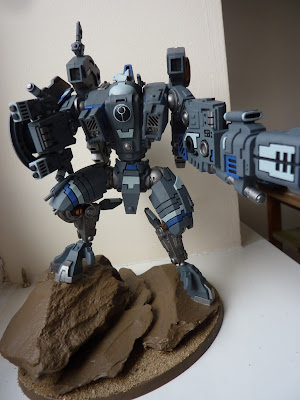