Here's the first in a series of unit reviews I'm going to write for the new Eldar codex. Bear in mind these aren't written based on playtesting so my opinions may change once I've had more time with the book. Anyway, the HQ section is probably going to take 3 posts to cover as the Phoenix Lords need a separate post to really get into them. Today then I'm going to look at Eldrad, Yriel, Illic and the Avatar. 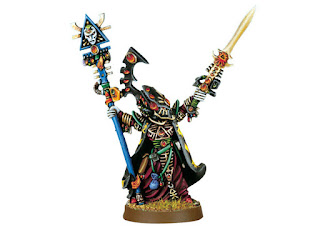 Despite costing more than double the amount of a conventional farseer, Eldrad saw plenty of action in the old book. As before he's toughness 4 which is significant for those S6 or 7 weapons. He gets Runes of Warding and Witnessing thrown in although they aren't what they used to be. He's also Mastery 4 (as you might expect). He retains a lot of his special rules too. Firstly he allows D3+1 units to redeploy which is great when going first and which unsurprisingly is no longer called "Divination". Secondly his staff allows him to potentially use more powers than normal. Whilst he can no longer use the same power twice he can regain warp charge on a 5+. His staff is now AP3 though which is a slight nerf really.

I've always been a big fan of Eldrad and indeed he's the only model I kept when my Eldar army went on eBay. The issue for some is that he doesn't fit in with jetbike seer councils but there's no arguing he's a powerful psyker. The combination of the Runes of Fate powers with Divination and Telepathy is pretty fearsome. Obviously, it's open to randomness but even with the Primaris powers of those disciplines he'd be potent. Whether or not we'll see him as much remains to be seen as I'm not sure farseers are necessarily as automatic a choice as they used to be but more on that later. 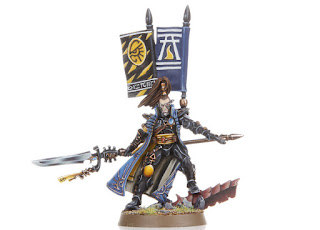 I vividly remember losing an entire unit of grey hunters to Yriel in a game at Blog Wars 2 (I think). He's essentially a beefed up Autarch. He's gained an extra wound since last time we saw him but is still pretty vulnerable to S6+ attacks. Having 3+/4++ helps but his Cursed special rule doesn't. He's solid in combat though and if you combine the Eye of Wrath with his warlord trait there's certainly the possibility of killing a swathe of enemy models (and possibly some of your own) in combat. Of course this is limited by the new pile in moves since at his initiative step he may not be as close to enemy models as he would've been in 5th.

He'll likely need a transport to be effective and without an assault vehicle he'll have to take some punishment on the way in. He's a decent choice but I suspect most will go with a standard autarch if they want reserves manipulation. They're pretty good for the points (but I'll get to them) and Yriel doesn't really offer much that they don't. 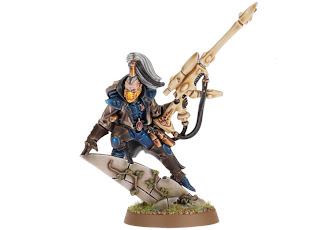 Illic is necessary if you want to unlock pathfinders in the new book although they're pretty pricey. Essentially they provide a similar benefit to before with Shrouded replacing Stealth and gaining the Sharpshot rule. Whilst we're on that subject that's a pretty significant thing. Illic has the rule too and it means you can choose to assign hits to specific models without needing 6s to hit. A whole squad doing this would almost guarantee the death of a squad leader type character and could worry ICs too. Obviously LoS rolls will hamper how effective this is but there's big potential there.

Elsewhere his warlord trait gives him split fire making his unit more potent. His weapon is 48" in range and has the Distort rule making it great against characters and decent against vehicles too. His Hidden Path rule is interesting allowing him to Infiltrate wherever he likes and allowing other rangers to deep strike to him. Interesting but difficult to see it's effectiveness. For normal rangers I can see the benefit as it allows them to get in behind units and pick of models that are staying to the back for safety. For pathfinders it seems a bit pointless. Perhaps I'm missing something but I'm not sure I really want him that close to my enemy in the first place so I'd be more likely to keep him outside 18" anyway.

Most will see him as a "tax" worth paying to get Pathfinders. Personally I think it makes them too expensive for something that's still vulnerable to flamers etc. Rangers as a cheap scoring unit are probably still a viable option though but again I'll be getting to them.

The Avatar of Khaine 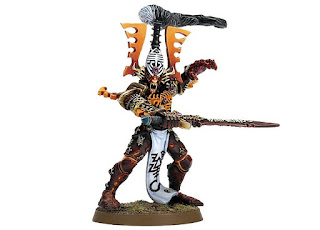 The avatar used to be one of my favourite units in the old book. Able to take on entire enemy squads alone it was a fearsome thing to behold. Well to me anyway, not many other people really used him/it. BS10 is back and he's gained a wound and attack somewhere in the last few years. The combination of battle focus and a meltagun is nice. He's certainly a major threat to vehicles. The fearless bubble he provides will come in handy for getting other combat units into the fray too. Sadly his invulnerable save has been reduced to 5+ but in combat it probably doesn't matter as very little will touch him with I10, WS10 and T6. The problem will be getting him into combat unscathed. Having the Character type helps him challenge out and annihilate enemy characters too.

He's now also eligible for a couple of upgrades. Realistically he's only going to use Fast Shot mind you. A two-shot BS10 meltagun is tempting. Should I ever get a full army again I think it'd be fun to run both an avatar and wraithknight! Once either of them is in combat they're likely to be pretty unstoppable.

Conclusion
None of the above are bad by any stretch but in a codex with a wealth of options they perhaps all could do with being a little better to justify their expense. Certainly Yriel and Illic are easier to justify as they're cheaper but generally they'll be a play-style choice and perhaps unlikely to make competitive lists.

Personally I'd love to try any and all of them in my lists but I need to think carefully before splashing out on the models.
Posted by From The Fang at 19:21:00