Probably the weakest section of the codex but that's often the case recently. Once again the aspect warriors are still nice models but with mediocre rules they'll not see the light of day very much. However, this section does contain the only reasonable dedicated anti-air choice in the codex.

Swooping Hawks
The fun of swooping hawks in the old codex was dropping them in, pie-plating a unit then taking off again before any reprisals. They can still do that in the new book but as before it's a case of whether you think the shenanigans are worth it. They have a decent amount of firepower but it's only S3 AP5.

The most interesting thing about them is their appropriately titled special rule "Herald of Victory". With it they can deep strike without scatter. When you combine this with Skyleap they can be doing their grenade pack thing and in turn 5 drop in to contest an objective late on. They'll be an irritation to your opponent but they won't necessarily win you the game if it goes beyond turn 5. 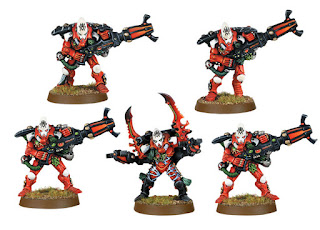 In the old book these were pretty survivable unit but with S6 at 12" range their weapons weren't all that stunning. Monofilament is interesting as it makes 6s AP1 which is great against vehicles, especially when combined with S7 (as vehicles don't have an iniative characteristic). Sadly they're still limited to 12" range but with Battle Focus and their jump generators they should be able to stay out of trouble better than guardians.

Having a 3+ save is crucial but sadly they suffer from the same problem as fire dragons. They're effective but pay a fairly hefty price at 19pts per model. Still, Hit & Run at initiative 5 (or 6 with an Exarch) is going to keep them alive better than fire dragons. They're certainly not a bad choice and worth a look but again I think people will be put off by their hefty price tag (money not points).

Shining Spears
Shining spears are another unit that suffers from both points and £s costs. The models are £10 at GW prices (20 for 3 jetbikes and 10 for the upgrade pack). They have the benefit of Skilled Rider and Outflank giving them some survivability. The Eldar Jetbikes & Battle Focus rules will help them stay alive when shooting too. However, 6" range is particularly pathetic and having the Lance special rule is a bit pointless for an S6 weapon. Giving them an exarch with Hit & Run and Monster Hunter could make them a good anti-MC unit but the points really rack up.

For a 5-man squad with the Exarch you're paying 170pts for what is essentially 5 space marines when they're being shot at. Personally I think that's a lot and there are better ways to spend the points. It's a shame because I've always liked the idea of the unit. 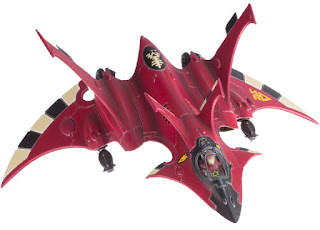 As mentioned in the title of the post. This is the only really viable anti-air option available to the Eldar. Offensively it's probably the best anti-air unit in the game. Having 4 S8 shots at BS5 (for the Exarch) that re-roll to penetrate against flyers. When you first read the Vector Dancer rule I'm sure, like me, you expected it to apply to Eldar flyers and sure enough, it does. Once of the problems with flyers is their poor manoeuvrability. Most of the time they get a couple of turns of shooting before they're left with a choice between flying off the board or doing a lap unable to shoot anything. Obviously Hovering is an option for some flyers but it makes them particularly vulnerable. Vector Dancer's extra pivot means you can do a nice zig-zag strafe along the board and hit something every turn.

Sounds pretty good then. Well to balance out all this awesome offensive power GW have made it out of paper. Realistically an army that relies on flyers, like Necrons or Guard will be taking this thing out as a priority. That means one, maybe two, turns (and probably a flyer killed per turn) before it gets brought down by whatever fires at it. It's a shame it couldn't have just been AV11 which I don't think is unreasonable for the points. With AV10 it relies on having an Autarch to manipulate reserves so that it can come on when you're sure it'll be able to kill an enemy flyer. Even against armies without much anti-air it'll still struggle to survive. When you consider a lot of flyers are cheaper, is it worth paying 180pts to take out what might be just one enemy flyer before being shot down?

Personally I love the model. I didn't at first but it's grown on me. That means I'm going to give it a go. It's a hell of a lot better than a Nephilim at least! Less said about that the better though. 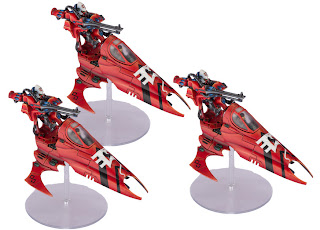 Never much use in the old codex and probably not much better now. It's got great agility as a weapons platform and plays a similar role to Tau piranhas. However, it's around 20pts more expensive than the piranha. For similar points you can have War Walkers which, as I'll discuss in the Heavy Support post, are probably a better unit.

Again, I love the models and bought one when they first came out because I always thought they were stunning. It's a shame they swapped the war walker in the battleforce for a vyper. The big issue for them is that they can't contest any more. Otherwise they might find a role. You can give them Crystal Targeting Matrices to make them durable but they just don't do enough for the points I reckon.

Hemlock Wraithfighter
The latest swathe of codices has been full of what are termed "synergy" units by the interwebs. The Hemlock is one of them. On it's own it can kill a unit with shenanigans. Basically it can cause enough wounds to force a morale check that must be re-rolled thanks to the Mindshock pod. If that fails then the Terrify power should succeed. The ability to strip Fearless and then make a unit take a test works beautifully with the Mindshock pod. It can also work well with other units by creating a coward bubble and allowing the shooting of your army to make units run in droves.

Sadly to use these things it needs to be within 12" and therefore it'll be taking a lot of rapid fire shots and even with free Spirit Stones it'll struggle to make it past a turn. It's certainly a force multiplier but the price tag is steep for an AV10 flyer. Could be enormous fun to use but it's a brief candle!

Conclusion
Realistically you can build a great Eldar army capable of taking on pretty much anything without even considering the Fast Attack section. That's a sad thing really but with the flyers on the pricey side for AV10 and the aspect warriors not really pulling their weight it's pretty true. Once again, I'm sure people will have great fun with these units and in fact none of them are diabolical (except maybe Shining Spears).

The heavy support section is next and unlike Fast Attack it has a wealth of viable units.
Posted by From The Fang at 17:00:00