In the second part of my series of unit reviews I'm continuing to look at the HQ section. This post will cover the Phoenix Lords.

As in the old codex the Phoenix Lords share a common statline which hasn't changed since the previous book. It's a pretty solid statline too with WS/BS 7, 4 attacks, 3 wounds a 2+ save. They've also kept Fearless, Fleet and Eternal Warrior. Most of the new books haven't had much in the way of EW so the Eldar book is the exception here. They've also all got the new special rules of Ancient Doom and Battle Focus. The Phoenix Lords have always been great in combat and the new batch is no different. That's what they've all got in common then but let's move on to look at them individually. 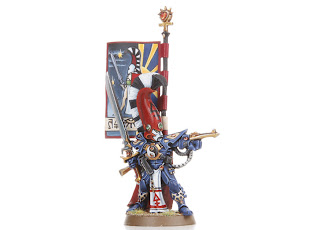 Asurmen
Always a bit of a strange one as he's a combat character that fluff-wise should be placed with Dire Avengers. First off he's 10pts cheaper than before. His shuriken catapult is twin-linked which is a bit of a waste at BS7 and in the old book it was 4 shots too! He's kept his 4++ save too making him pretty sturdy. This can be boosted to 3++ in combat but reduces him to a single attack. His sword is now master-crafted rather than allowing him to re-roll all misses as before. However, it has the Soulrazor special rule which can remove models from play should they fail a leadership test.

He gives his unit counter-attack which is nice but hopefully you'd be charging him in with whatever squad you'd attached him to. The main thing to note about Asurmen though is that he can have D3 warlord traits. This gives him a good chance of getting Fate's Messenger and re-rolling his 2+ save. None of the warlord traits are awful either so whatever happens he's getting a boost.

Jain Zar
In the old book Jain Zar was a combat monster. She's slightly more expensive but otherwise hasn't changed a great deal. She's lost S5 and Furious Charge but she gains Shred which goes some way to compensating. Like Asurmen her CC weapons are AP2 as is the Silent Death when thrown. This has been reduced to S4 too but is now Assault 4. Disarming Strike could be quite fun and will help to protect her from power fists etc.

The Mask of Jain Zar replaces her previous War Shout exarch power which means all enemy models have their WS and Initiative reduced by 5. I'm confused as to why they've also given her Fear then since that essentially does the same thing?! The combination of her Warlord Trait and Acrobatic skill means both her and the unit she joins can run up to 10". This gives the Silent Death an effective 12" range but otherwise isn't much help. I'm assuming here that even with Battle Focus, Eldar models can't run and charge. I can't see how you could interpret the rules to allow them to still charge but perhaps some will. 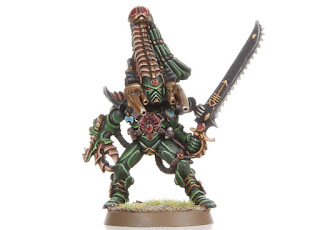 Karandras was always my favourite Phoenix Lord from the old book. The key thing for him is that he can give a unit Infiltrate, Move Through Cover, Night Vision and Stealth. That's a pretty decent combo. There's nothing to say he has to join Striking Scorpions so that combination could be good with some wraithguard outflanking perhaps.

He's a pretty solid combat character with an S8 power fist that strikes at I7. Combined with Stalker, there aren't many characters that could stand up to him in a challenge. His bonus S6 attack is nice too but not particularly effective. Sadly it doesn't really make up for the two extra attacks that the Scorpion's bite used to give him.

I'd love to try him out with a squad of wraithblades or even striking scorpions in support. The problem is that even with Infiltrate the rules no longer allow for assaults from Infiltrate or Outflank. Still he's going to be feared by enemy characters and is fairly tricky to shift.

Fuegan
Having a two-shot BS7 18" range melta is always nice and his Warlord trait allows him to split fire from his unit too. With FNP he'll last a while and even if he starts to take wounds he only gets better. The combination of Crushing Blow and his Unquenchable Resolve special rule means that if he's alive with a single wound he'll be S7 with 7 attacks on the charge. That's a pretty formidable prospect even if he is a wound away from snuffing it.

The Fire Axe is a pretty solid anti-tank weapon too. With S5 as standard he's got a good chance of penetrating the usual AV10 rear armour even without Armourbane. With it, there are very few vehicles that could survive a charge from him without explosion!

Basically he hasn't changed a great deal from the previous codex but now has Fast Shot instead of Crack Shot. 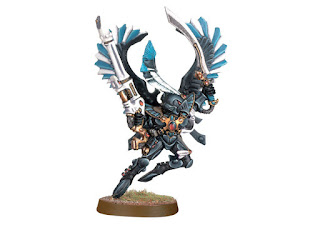 Like Asurmen Baharroth has  4++ save but is otherwise one of the weaker Phoenix Lords. He's easily the most mobile of the lords but hasn't got as much of a punch in combat. He may cause Blind but that isn't really all that effective against high initiative targets. Thanks to his ability to deep strike he's probably the easiest to get into combat but once there he's hardly stellar. Sure he's got a solid statline but with only an AP3 weapon he isn't as powerful as most of the other lords. Maybe I'm missing something with him but if I'd got points spare for a Phoenix Lord I'd be picking a different one.

Maugan Ra
Despite a general downer on the Phoenix Lords in the old codex, some still found a place for Maugan Ra. Thanks to Relentless and Battle Focus he can move pretty fast and still fire his Maugetar, which retains its previous book profile. He may have lost Crack Shot but his Marksman's Eye exarch power means he can pick characters out more easily. Sadly with the Maugetar being AP5 that perhaps isn't all that useful. Again perhaps I'm missing something but with AP3 and no other combat bonuses I don't see the attraction.

Conclusion
As with the other special character HQs, the Phoenix Lords are unlikely to see a lot of action in competitive play. They're all around 200pts and despite being pretty durable they're still not really doing enough to justify their cost. They're only T4 meaning anything that can kill 3 terminators won't have a hard time dealing with them. Weight of fire will easily be enough to bring them down. Even Fuegan with his FNP will still struggle if enough shots are sent his way. That being said they're far from useless. Perhaps I'm missing a deadly combination too.

Asurmen, Fuegan and Karandras are reasonable choices but for the points I think I'd rather have an avatar. Sure, the lords can be attached to squads, but somehow I can't bring myself to put them in a list. Certainly Maugan Ra and Baharroth aren't worth their points (again unless I'm missing something). Most of the models are starting to look a touch dated now too. They're still decent but have that certain 2D quality that the older sculpts posess. Unless I'm mistaken some of them are still metal too.

Next time we're onto the generic HQs, hope these are proving helpful so far!
Posted by From The Fang at 22:15:00