This codex is certainly taking some getting through with 3 posts needed just to cover the first section!! Today we're on to the generic HQs in the form of the Autarch, Farseer, Spiritseer and Warlocks. As with most armies these are probably more likely to see use that the named characters thanks to their comparitively low cost. Before I start I just want to take a quick look at the Remnants of Glory.

They're all pretty pricey considering the models that can take them are pretty cheap to begin with. Most of them fall into the category of interesting curiosity but the ones that I think will see use are the Mantle and Wing. A farseer on a jetbike with Mantle could be pretty much invulnerable as he zips around handing out bonuses from psychic powers. Makes him pretty expensive but it's a great way of keeping him alive. If anyone elects to use the Wing it'll probably be for some late game objective contesting shenanigans. The Spirit Stone of Anath'lan might be an option too for getting the most out of a farseer but only a jetbike mounted one who can cope with losing an invulnerable save for a turn. The rest aren't really standing out for me as their benefits don't really outweigh their cost or they're too situational. 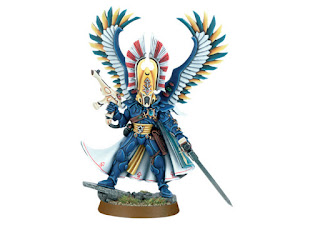 As with the old book these guys have an array of different equipment options making them great utility characters. Spending 70pts for a model with a decent statline including 3+/4++ save is already pretty good. That being said he isn't really a combat monster and most will probably want to keep his points to a minimum. Essentially the reason to take him is for some reserve roll manipulation. With the crimson hunter (more on that later) being the only really viable anti-air, having the ability to help it come on the turn after enemy flyers is crucial. With very few options for reserve manipulation around I can see a place for an autarch in a lot of Eldar lists including allies.

The most useful loadouts for him will probably be jetbike mounted with a laser lance or warp jump generator and a fusion gun. With so many possible wargear combinations I'm sure they're some I haven't considered but essentially you just want to keep him alive long enough to get your reserves in. 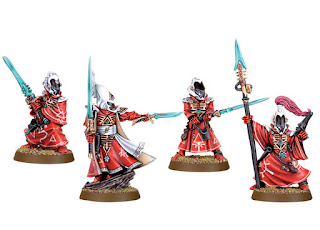 If you'd never seen an Eldar codex before you'd think these guys were an absolute bargain. For just 100pts you get a mastery level 3 psyker with access to Divination, Telepathy and the new Runes of Fate disciplines. That's already good value but then when you throw in a 4++ save, 3 wounds, WS/BS 5 and initiative 5 it seems even better. For 115pts you can mount him on a jetbike too. Not only that but you get the standard Battle Focus and Fleet combination along with a near total invulnerability to perils. When you look at it this way he's awesome for the points and up there with the best psykers in the game.

However, the problem is always going to be that he'll be compared to what he was in the previous book. You paid 125pts to get a farseer that could use two powers per turn but the key thing is he had Guide and Fortune guaranteed. This is a major change in the role of the farseer. Not being able to guarantee what psyker power you'll get is a big blow. However, you can be sure of always getting Guide from Runes of Fate and Prescience from Divination so there's still potential there. Telepathy is a great discipline too with some truly nasty powers.

Sadly the Runes of Fate discipline is somewhat hit and miss. Basically you'll want Doom, Fortune and Guide as you did before. Guide is primaris so you can always have that but the others you'll have to just be lucky to get. The other problem is that Fortune is warp charge two which makes it expensive even if it does grant near invulnerability to some units.

Spiritseer
The spiritseer will see a lot of action for the simple reason that he provides the only Troop unlock in the codex, in the form of Wraithguard and Wraithblades. However, he's also a mastery level 2 psyker for 70pts and his Spirit Mark is essentially a short range markerlight. There are some great powers in the Runes of Battle discipline too which means force multiplication.

His witch staff is a nice feature but won't particularly trouble many things as he only has a single attack.

Warlock Council
In the old book Warlocks were great little utility characters for improving guardian squads and excellent when combined with a farseer in a seer council. One of the major changes is that they can no longer join wraithguard units. This is a bit of a blow for those who used them in this role. The other significant change is that their powers now require a psychic test on Ld8 to manifest. This alone makes them a lot less effective than before.

They're 10pts more expensive than before but only slightly more when jetbike mounted. Again, the major change here is the random nature of their powers. The Runes of Battle section has some fantastic powers but its difficult to base your strategy around it when you won't know what you're going to get. The rules are quite specific in that warlocks are assigned to squads immediately after Warlord Traits are generated i.e. BEFORE psychic powers are chosen. This means you can't be sure you'll get what you need in the squad you need it in.

Having said that, the primaris power is pretty good and especially so when combined with a jetbike mounted seer council. It essentially gives you a 3++ save which is 2++ when turbo-boosting. They'll probably see the most use on jetbikes really. With windrider jetbikes being particularly awesome (more on them soon) they'll be great for boosting the effectiveness of them. The jetbike seer council is still alive and well (if a little more unpredictable) but it's a shame we didn't get any models meaning time consuming conversions will be necessary.

Conclusion
All of these units are effective in their own way. The autarch is a difficult one because, whilst you want his reserve manipulation, he doesn't really do a lot himself. Farseers are by no means the automatic choice they were before and many will be put off both farseers and warlocks by the random nature of their powers. I still think we'll see plenty of them but competitive players may look for more reliable options.

That rounds off the HQ section then. There are far too many choices here and whilst I love the flexibility that brings its a shame that some units that would be great in another codex will simply not get used here. Next we'll take a look at troops which is a far shorter section despite still being longer than most other books!
Posted by From The Fang at 17:00:00