Before I go any further I wanted to point out that at the start of the year one of my resolutions was to push for 200 followers. Well we're about half way through 2013 and I'm up to 200 today!! I'll have to look through my other resolutions and see how I'm getting on with them! Anyway, a big thanks to everyone who reads, the followers thing means more to me than pageviews so I really appreciate it.

Blog Wars 5 was held at the North West Gaming Centre in Stockport today. We had new record of 30 players all competing for the crown which had been previously controlled by Andy Humphris. I knew we'd be having a new winner today and, without any further beating about the bush, I'm pleased to announce that winner as Franco Marrufo with his dirty, dirty broadside spam Tau and Eldar list. He never really looked in danger of not winning throughout the day but it would've been interesting to see him play Andy for it. Maybe next time eh?

Chris Benstead took second with a Chaos Space Marines army that he hadn't used before the day. Respect to Chris for that but it doesn't say much about the rest of us! In third place was Rob McDougall who beat his good mate Frank Marsh by a single point.

I placed a respectable 6th with my Tau army. I'm pretty pleased with that performance considering I didn't really play the ideal armies for my list. More on my games over the next few days (might be longer since I'm very busy this week). I'll also be posting details of the painting competition shortly it was a close run thing in both the army and special character competitions. For now here's the full rundown of the results which have also been added to the results archive which can be accessed via the tab at the top of the page. 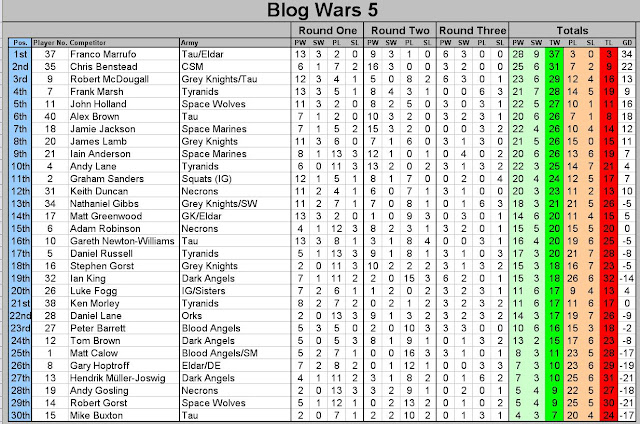 I've had some great feedback from people (thanks for filling in the forms guys) that I'll go into more detail about in a later post (probably when talking about the plans for Blog Wars 6) but for now I want to briefly talk about the scoring system.

I was determined to simplify the scoring system for Blog Wars 5 as previous events have been overcomplicated. As much as I like the 5th edition style VPs (i.e. score based on how many physical points of your enemy army you've destroyed) it doesn't really encourage people to play the mission. Therefore I opted to employ the 6th edition version of VPs and separate people based on how many points they'd given away. I wanted an emphasis on the primary mission so that people would actually focus on it rather than worrying about how much of their opponent's army they'd destroyed.

I'm fairly pleased with how the scoring system worked today. As the tournament organiser it was very simple to enter into the spreadsheet and it seemed like most people scored their games correctly. Not having to add up the old style VPs (I wish they'd call them something different in 6th) meant the results came in a lot quicker. Hopefully everyone playing today found it simple too.

That being said it isn't without it's flaws. We did play Purge The Alien today and if you come up against an army with few points on offer then you're limited in how much you can score even if you table them. Also, as a couple of players found you can win all of your games narrowly and not place very high. I have to say I don't like the idea of you winning all your games but being down the bottom end of the table. Obviously these games were close run things but winning should be rewarded better. It's something I'll think about between now and BW6 and hopefully come up with a solution.

I think some people found it difficult to work out how the placings had been figured out. To clarify it goes:


The idea is that it rewards people who push for maximum points from their games whilst trying to prevent their opponent from scoring many. Basically that's the whole idea of the game for me. If that doesn't separate peopel then primary VPs come into effect so that it rewards people who played the mission. Clearly closely fought games don't score highly though and the person winning should be rewarded better. I'll hopefully address this for next time.

The only other issue with the scoring system was that we randomly ended up with The Emperor's Will as the final mission. This is crap as there really aren't many points available and it's easy for the primary points to be 3s or 0s for both sides meaning secondaries determine the winner. One solution that was suggested was to make the objectives worth a lot more points e.g. your home objective is worth 5 pts whilst your opponents objective is worth 10pts if you manage to steal it. This means there's 18 potential points available (3 from secondary) which brings it in line with Crusade with 5 objectives. The other alternative is to fix the missions but I'm not necessarily a fan of that. It needs some thought and any feedback or suggestions are gratefully received.

Right, I'm shattered so that'll do for today. Once again a big thanks to the staff at the NWGC for helping make it such an enjoyable day again. Hopefully see you all again later in the year for BW6!
Posted by From The Fang at 22:46:00