Who doesn't love a good pie chart eh? Well even if it's just me I'm using them anyway. The army lists all came in over the weekend and they've all been checked through. If you haven't heard back from me it means that there were no issues with your list. Sorry I didn't have time to reply to everyone directly but it's a long enough process and it always gives me a headache. Thankfully there aren't too many guard armies this time which I always hate checking because there's like 50 units in a single troops slot.

Sadly I have to report that the numbers have dropped sharply and I've only received 30 lists. This is still more attendees than I've ever had (assuming everyone shows up on the day) but it's a long way off the 40 plus reserves that I had within two weeks of the tickets going on sale. I wish I could put the drop-out rate down to the change of venue but that probably only accounts for a handful based on the reasons people gave. It's a little disheartening when you put a lot of effort into an event (which I run solo by the way) and still struggle to get the numbers. Anyway, it's made me more determined that Blog Wars 5 will be the best yet! One thing's for sure, we'll have a new winner!

Moving on, there's just 9 days left to get your army painted up. I'm down to my last unit but they're taking longer than I expected. My army won't be anything special as it's only tabletop standard at the moment but I'm still pleased with how it all looks on the board. I'll be posting pictures up over the weekend with my full army list too. Rest assured I decided on my list weeks ago so I haven't made any sneaky changes now I've seen all of your lists!

Anyway, here's a nice pie chart of what armies showed up at last event, Blog Wars 4: 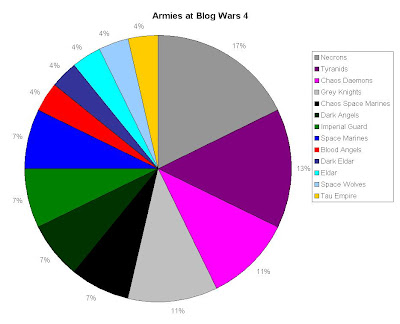 Compare that to what we can expect to see at Blog Wars 5 on the 22nd. The pie below represents primary detachments only. You can click to make both of these bigger by the way: 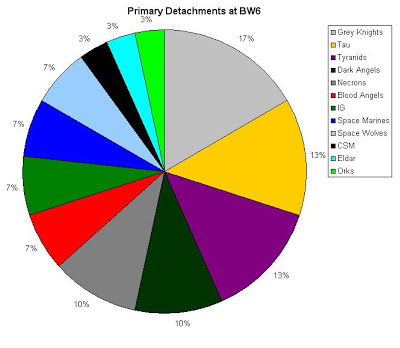 It should come as no great surprise that Tau are more popular this time around as their new codex has put them right back into the game. There are three pure Tau lists and two lists with allies (one with Tau primary, the other with Tau allies). What is perhaps more surprising is that Tyranids are well represented again. You might think this is just regulars showing up again but I'm fairly sure that most of the nids players this time around haven't taken them to a Blog Wars before. Happily there aren't as many Necron players this time around so you've only got a 1 in 10 chance of facing them! No offence to the Necron players of course!

The biggest surprise though is how well represented Grey Knights are. There's 5 GK armies coming to Blog Wars 5 but three of them have something else as allies. With the general shift away from mechanised lists it's interesting to see that they're still popular when their most common composition was mech-heavy.

The other armies haven't really shifted much in popularity. Dark Angels are slightly more popular but nothing to write home about, mind you that's probably pretty representative of the general feeling about the army. Personally I'm finding it difficult to get excited about them with Tau and Eldar around. Speaking of which, there's only one Eldar list featured here but a further two armies contain Eldar allies. There are no pure Eldar lists but it's not too shocking since the codex only hit a week before the deadline. Hopefully you've been reading my codex review to know what to expect if you face them on the day. 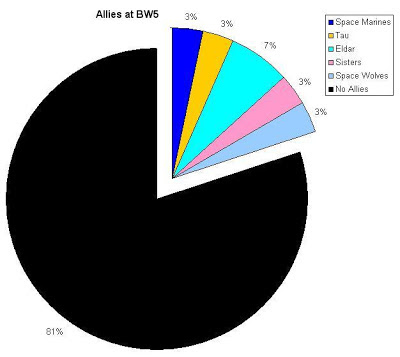 As you can see above, only 1 in 5 armies features allies with no army particularly standing out as a popular choice. Personally I'm not a huge fan of the allies mechanic. For starters it makes list checking a ball-ache and secondly I think at sub-2K points it's difficult to include them in most armies without sacrificing some efficiency in the primary detachment. Having said that I'm going to be playing around with allies more in the next few weeks as I decide whether or not I want to restart an Eldar army.

Finally, the most poplular special characters are Coteaz and Imotekh. All three Necron lists feature the Stormlord and all but one of the GK lists has Inquisitor Coteaz. They're pretty solid choices so it isn't much of a surprise. Two-thirds of the armies feature a unique special character that doesn't appear in any other list. The remaining six armies are split between Azrael, Logan Grimnar and Longstrike.

There you have it then. I hope you're all looking forward to this as much as I am. There's still a lot for me to do but luckily I'm fairly well practiced at it now. I'll be announcing the raffle and spot prizes at the weekend so keep an eye out for that.
Posted by From The Fang at 17:00:00