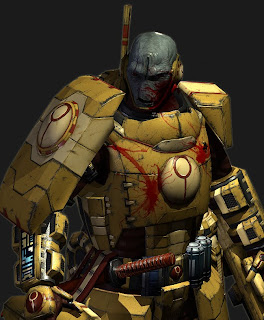 Whilst browsing around my usual reading list of blogs I stumbled across Faeit 212's collection of tau rumours. When I came back into 40K a couple of years ago I invested in a Tau force because I always liked the models even when I left back in 3rd edition. It didn't take me many games against Matt's Blood Angels to figure out that they struggled to be competitive in the modern game. That doesn't mean it's impossible to do well with them in tournament play but it takes a brave and skilled man to do so plus a decent helping of luck wouldn't hurt. There was actually a Tau army in 3rd place at the original Blog Wars which I was pleased to see.

In these days of shooting dominated 40K I think a new book for Tau will help in bringing them right into the forefront of the game again. Having seen what's happened to Dark Eldar, and more recently the Necrons, I'm filled with anticipation about what will become of my beloved Tau. In a similar way to Adam from the SW blog and Warhammer Tau I feel that Tau are the army I love to play with. Don't get me wrong I love Space Wolves and thanks to reading a few of the Black Library books I've fully immersed myself in their backstory. They're by far the most interesting of the SM chapters. However, there's something about Tau that keeps pulling me back. For all the games I play with SW I'm always up for trying the Tau again. I recently had some success with them in drawing a game against Jamie's Blood Angels (which I'd have won if we'd got another turn).

For me there isn't really much that needs doing for the Tau but here's my wishlist:
Anyway, I know I'm wishlisting but I'm sure the other Tau players are too. Once I've got more of my Dark Eldar finished I'm gonna start up painting my Tau again. I've got a cool colour scheme in mind and I'm sure that most of the models I have will still have a role when the new codex lands.
Posted by From The Fang at 18:00:00