Yesterday I posted up a battle report of my Space Wolves first game against Matt's Necrons. I wanted to dedicate a full post to talking about my thoughts on the new codex. Bear in mind we only played one game and obviously not all the units from the new codex were used. There were a couple of stand out units in there and others that weren't as good as expected. 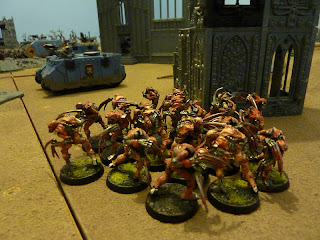 General Necrons
The main problem this army isn't going to have is it's I2. Against most armies that means it'll fold in combat. My thoughts on this are that it's just the same for Imperial Guard or Tau. I think its a good thing that the troops are a lot cheaper (obviously good for GW as well) but it means we'll be able to see much bigger armies than we did before.

The basic warriors and immortals are still excellent units and as much as people whine about it I think the larger numbers of them on the table will mean a lot more glancing hits! It was glancing hits that did my land raider in and I'd be cautious about moving it in to close to a squad of warriors now. The flayed ones are pretty weak. They're meant to be a decent combat squad but without fleet, fearless or decent initiative they're really going to struggle.

There's been much hype about this codex hinting at 6th edition rules and I think that's why Destroyers are so expensive. They aren't particularly brilliant in their current incarnation but if Preferred Enemy becomes a shooting bonus too.....

Imotekh the Stormlord
The internet is very excited about this guy. The idea of being able to play whole games in Night Fighting and shoot lightning at everything on the table has people foaming at the lips. Needless to say Matt tried out all of his special rules and I wasn't exactly blown away! The ability to drop your Flayed Ones in without scattering sounds useful but since it's random Matt ended up with a target that would've put them right next to a rhino full of grey hunters with a heavy flamer from a land speeder looming close. In the end they came in by a normal deep strike that didn't scatter much. They promptly got annihilated by a grey hunter charge. Now I can see that if they'd got long fangs as their target then they'd have been much more useful but to be honest Imotekh doesn't really add much to them.

His staff didn't find the range to hit the terminators but I could see how deadly it could've been. If you got a good roll you could potentially cut down a couple of squads of marines. Realistically though it's unlikely to happen as the usual roll will be 6-8" and that's unlikely to get more than one unit. His 4+ Seize the Initiative could be brilliant against an unprepared opponent. Although it's still 50:50 your opponent will almost be expecting you to make it. I think the danger would be that you'd also expect to and you'd deploy too aggressively.

Onto the big one, Lord of the Storm. In Matt's case he got one turn out of it and that was it. He didn't manage to get any lightning off and the power was wasted. Now obviously this won't happen every time but it's a possibility and thats 225pts you're paying for it (well obviously not quite but you get the point). Against armies with a high unit count such as GK razorspam this could be devastating popping open transports each turn. Personally though I think the main benefit is the Night Fighting and my issue with that is that none of the Necrons have Acute Senses/Night Vision. Some enemy armies do and most SM armies will suddenly remember they've got Searchlights. This might play to the Necrons advantage but we'll see. Now don't get me wrong for an army based around Rapid Fire and potentially footslogging lists it's still going to be useful allowing you to get in close. My concern is that against assaulty armies you're playing right into their hands. 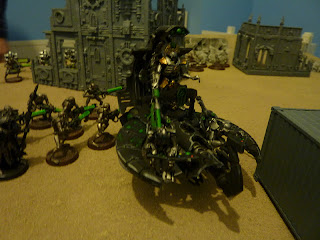 For 160pts you can have an Overlord with a 2+/3++ save, S7 power weapon (that rolls 2D6 on vehicles) and T5. Now personally I think that's a bargain, even given his I2. Stick him in a Catacomb Command Barge and he's got great potential. The Sweep Attack rule is brilliant and can be used to snipe models from a unit if you get lucky! Fly over a land raider and hit it 3 times with a weapon that's just shy of a melta gun. Oh and still claim a 4+ cover save afterwards!

Yes he's got a pesky I2 but with a 2+/3++ save there aren't many things he won't be getting some attacks against and he'll probably kill a couple. Throw in some Mindshackle Scarabs for a bit more defense and he's got a good chance of winning the combat. He charged my Grey Hunters and lived to tell the tale (well til I shot him!). Granted Matt was very lucky with his rolls but he's still pretty reliable. In larger armies you got ditch the Sempiternal Weave and take two Overlords with 3+/3++ in barges for 450pts. I think that's pretty reasonable given the Sweep Attacks. The other advantage is you'll be able to take some Cryteks and give a couple of them Solar Pulse for some first turn Night Fighting for your opponent (or last turn as well if you had two courts). 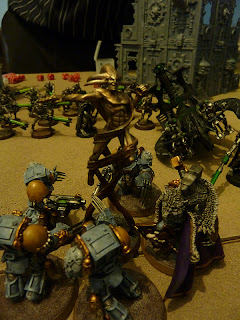 There was a bit of uproar amongst the Necron old school when their precious Nightbringer got nerfed. However, I think they're still pretty good. People have said that if they're hammered with enough krak missiles they'll easily be killed but in my opinion that's a turn when the long fangs etc aren't shooting something else. Not to mention that it'll be 3+ to hit, 3+ to wound and then he'll still get a 4+ save. Matt's C'Tan did well against Arjac and his terminators, killing them all off but costing him 3 wounds.

The problem with the C'Tan is choosing the powers. I love that they're like psychic powers but without a test but some are better than others. I think the Transdimensional Thunderbolt will be seen a lot as it means the C'Tan can de-mech something to assault rather than relying on shooting from elsewhere in the army. The other powers could be very situational. I like the Jaws-style single out a model and make it take an initiatve test or be removed. Alright it's going to have the same drawbacks as Jaws but worth it for the times when Draigo rolls a 6! Don't forget if you kill the C'Tan in combat your models will take an S4 AP1 hit! I think we'll see a lot of these guys and I think it'll be interesting to see what powers people choose. 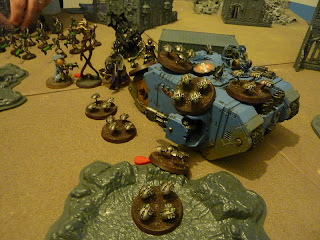 For me these are the unit that will get whinged about the most. They are, in my humble opinion, the stand out unit of the codex! Sounds a bit ridiculous for something that's got such a poor base statline but seriously, play against an army with a few of these and things could get nasty. Yes they're vulnerable to blasts etc but you can have 30 wounds for your opponent to chew through. I think there's a beautiful synergy between them and the gauss weaponry of the warriors. There's a decent chance the gauss shots will immobilise a vehicle and then the scarabs use their 12" charge range to make a real mess of it.

As we understand it Entropic Strike means for each hit you roll a D6 and the vehicle loses a point of armour for each 4+. The scarabs can then use those same hits at their base strength and rip into the vehicle. S3 suddenly looks a lot more scary. Think of it this way, a unit of 10 scarab bases charges a land raider that move 12". 50 attacks means about 8 hits and -4 points of armour. Suddenly that land raider can be hurt by bolters! Think about that for a minute!

Thought about it? Now try and tell me you won't be scared of these guys! Against a rhino/razorback that same 10 bases will make it AV 6 on the rear and now S3 can easily penetrate it and those same scarabs are likely to do so 3 times. Against troops they'll probably be cut down but put some attacks on an independent character and there's a good chance he'll lose his armour save!!

Did I mention they're 15 points per base?? Need I say more? Actually how about your opponent having 3 swarms of them and a spyder or two spitting them out? OK now I'm done!
Posted by From The Fang at 17:00:00