Necrons Announced (by GW this time!)

Well despite us having seen them already the Necrons are officially here to Advance Order. Beasts of War may have "leaked" the images weeks ago but after GW made them remove the images from their sight they released a teaser video stating 28th Oct as the order date. 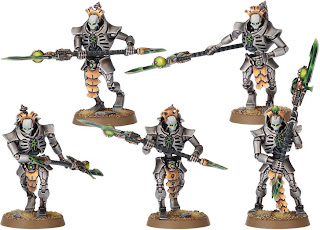 As with the Dark Eldar we've been waiting a long time for a new set of rules for the Necrons. I'm always happy to see another army being competitive again. With the exception of Tau I think most of the armies can put up a decent fight in 5th now and I eagerly anticipate the Tau codex and possible miniatures. I hope the Necron codex is good and that start to see them on the tournament scene as something other than "oh isn't it nice that someone brought Necrons even though they're crap". 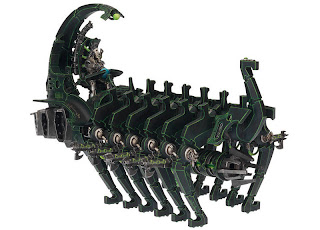 Part of me is disappointed that they've been given transports like every other army in the game. There was something about a footslogging robot army that appealed. I hope they've lost the We'll Be Back stuff in favour of 5th friendly things like Feel No Pain. I've been deliberately ignoring any rules rumours as you can't guarantee  they're genuine. Having said that most of the DE stuff was right. I'll certainly be thumbing through the Necron codex when it lands. I'm hoping Matt will cave and buy them so that I don't have to!!
Posted by From The Fang at 07:05:00